Kickstart the Comic – Vessels #2: The Traitor and the Bear

The great thing about these Kickstarter projects is that many times even if you missed issue #1, they make it very easy to catch up. 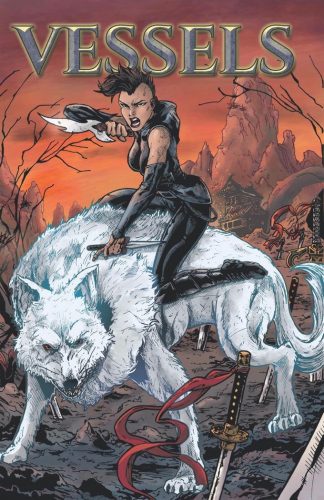 Vessel #2: The Traitor and the Bear

Vessels is the brainchild of comic writer and multi award-winning video game critic Dave Cook AKA Car Shark Comics, and is a love letter to RPG gaming – most notably the From Software series Dark Souls.

It stars Wake, a gifted warrior with the ability to enter the realm of dreams and bend it to her will. She and her comrades G’Dala (a skilled mage) and Marillon (a master thief with a motor mouth – like Deadpool!) and tank-class D’Saahl set off to halt the imminent death of their world.

However, the laws of reality are breaking down as the Veil seeps into the waking world. Logic, physics and time are becoming convoluted, with weird and deadly effects, such as the giant teddy above which falls from the sky in issue #2.

Our hero – a legendary warrior named Wake – and her companions G’Dala and Marillon must travel the land to halt the decay of reality itself, and unravel the mystery of the Vessels – five bloodthirsty knights hell-bent on stopping Wake from completing her goal. 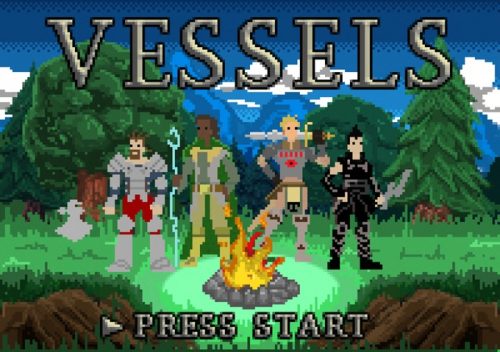 One thing the regular comics scene doesn’t do very much of is fantasy based comics. I’m finding that sub-genre is certainly finding its footing through Kickstarter related projects. Vessels looks as if it is following a bit into Dark Tower territory with the idea of a more fantasy world suddenly coming into contact with very strange objects (see: a giant teddy bear). A world in transition with our heroes trying to save the day… or at the very least trying to let the world that they know hold on for a little bit more. And of course the enemies who will do everything in their power to ensure there will be no happy endings.

One other nice thing is you get a little sampler of the first four pages of Vessels #2 linked on the Kickstarter page.

This is the Kickstarter for the second issue of the comic book. However, they make it very easy for you to immediately catch up with the series by offering reward levels containing pdfs or physical copies of Vessels #1 & #2. In addition, there are opportunities to get some prints… one of which is the excellent throwback to the 8-bit era showing our heroes as old-school video game characters. Lastly there is the opportunity to also sample a couple of their other series: Bust and Comichaus as add-ons to your Vessels orders. 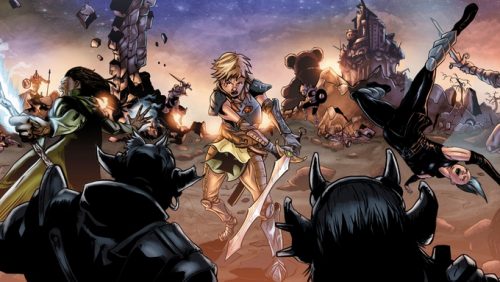 I love the opportunity to see how others world build (or maybe in this case it is world destroy). Fantasy settings offer all sorts of opportunities to shake up the genre and make sure you leave the readers guessing at what your next move might or might not be. Again, having a giant teddy bear drop out of the sky ensures this reader that things are going to be different from what you think.

And that is a very good thing. I look forward to reading it.

For more information on Vessels #2 and Card Shark Comics, check out their Facebook Page here.

Writer of comics and novels. In 2006 his first short story "The God That Failed" was published by Terminus Media in their debut comic Evolution Book 1. Since that time he has had stories published in Terminus Media's Evolution Book 2 and Evolution Special, Kenzer and Company's The Knights of the Dinner Table, and Four J Publishing's The Burner #3. Currently he is eagerly awaiting the digital publishing of his first creator-owned comic The Gilded Age #1 to be published online as well as his first novel The Dark That Follows later this year.
View all posts by John McGuire →
Tagged  Card Shark Comics, Dave Cook, Kickstart the Comic, Kickstarter, Rafael Desquitado Jr., Vessels.
Bookmark the permalink.