This week’s RPG Kickstarters focus on games ripped from the darkness of space, the worst of human history, and the color purple. Let’s count down the darkest RPG Kickstarters going this week. 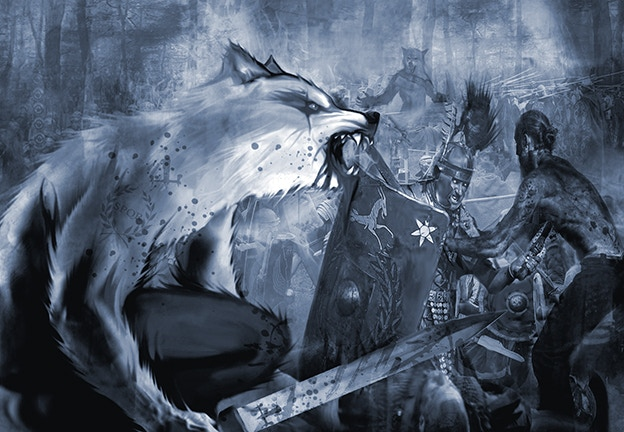 Welcome to the Great Rift, a mostly unexplored region of the Third Imperium universe close to the Spinward Marches and Trojan Reach!

This Kickstarter project is to create a brand new box set for the Traveller roleplaying game, detailing not only the sectors of the Great Rift but also providing a comprehensive guide to deep space exploration and the mysteries that can be found far from the shipping lanes.

When thinking of darkness, Traveller has gone the extra parsec by producing black covered books about space. The mock-ups below are exquisite. 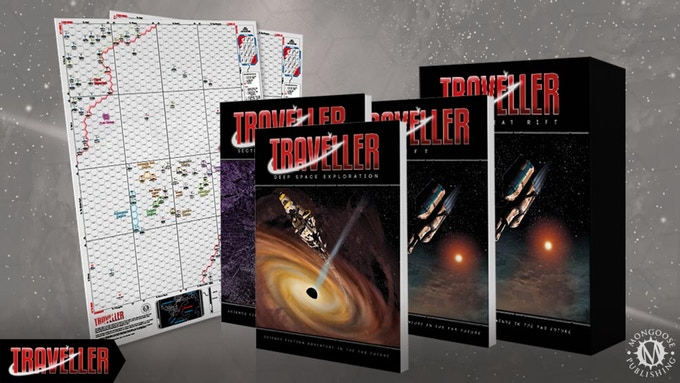 Are you a fan of Traveller? This Kickstarter covers the latest expansion for one of the original RPGs. The current edition looks slick and Mongoose Publishing believes in their product – they’re offering a variety of previews. Gamers that want a legacy sci-fi RPG can discern if this is for them or not from those samples.

“Contribute to help create a prestige edition of Chronicles of Darkness: Dark Eras 2 and help pick which Eras we include! 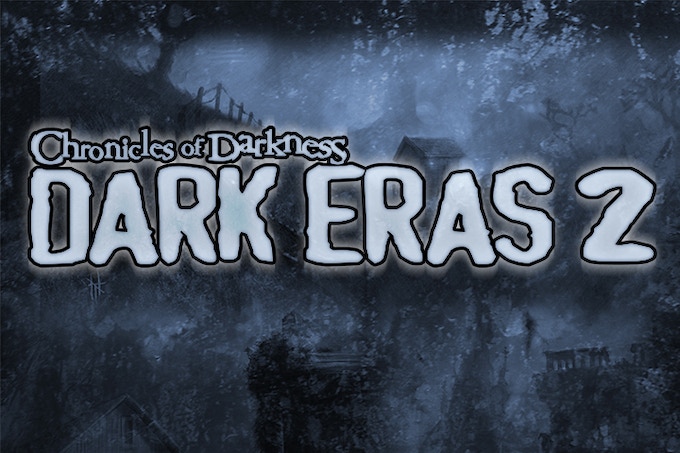 We have shared the world with monsters for millennia…

Chronicles of Darkness: Dark Eras 2 starts out presenting a chapter for each of six historical eras; each of which features two Chronicles of Darkness game lines which include Vampire: The Requiem, Mage: The Awakening, Hunter: The Vigil, Changeling: The Lost, and more! The rules in this book are compatible with second edition Chronicles of Darkness. Each terrifying time period and location is examined through the supernatural creatures that dwell there:

To the immortal Kindred hidden within the House of Bourbon, the old ways of monarchical rule and royal privilege seem as eternal as the endless stretch of their nights. As the first stirrings of the Carthian Movement take shape alongside disenfranchised mortals yearning for liberty, fallen angels seize this opportunity to tear down the Machine’s Infrastructure creating the penultimate struggle for survival. As the Revolution reaches its height and the Terror begins, the God-Machine’s wayward children wonder whether Hell on Earth might be within reach after all.

The Great War displayed humanity’s potential to commit to wholesale, ceaseless slaughter of their own species. In such an era, the Scar tears asunder, and the Beshilu rejoice in the mire of the Western Front. Meanwhile, soldiers who, by every right known to mortals should be dead, stand back up to rejoin the battle — or fight back against the Reapers stalking battlefields throughout Europe. Now, both werewolves and Sin-Eaters will struggle to coexist, do their duty, and avoid getting caught up in one of history’s deadliest wars.

DARK ERA: Light of the Sun – Europe (1600s).
Deviant: The Renegades and Mage: The Awakening:

Galileo. Kepler. Newton. On the heels of the Italian Renaissance, reason and belief clash at every turn. Scientific discoveries disproving heliocentrism are subverted and deemed heretical. Scientists, mages, and astronomers are arrested by the Inquisition, and their books are banned. In response, intellectuals on the brink of discovery turn to alchemy and the magical arts, and create deviants to defend their laboratories and universities. Not all in this age agree violence is the option, however, and worry the Church’s power is too strong to fight. What’s more, no one expected the deviants to have a mind and will of their own.

DARK ERA: Seven Wonders of the Ancient World (100 to 50 B.C.E).
Changeling: The Lost and Promethean: The Created:

As the locations of the most significant manmade structures in the world are revealed, adventurers from Greece to beyond seek them out to bask in their glory. It is tragic, however, that some wonders must be kept secret. The Gentry do not respond well to their Hedge being disturbed, and the seven wonders are coated in thorns for the unwary. There is no telling what they will do when they encounter the Created, who have heard of these wondrous places immune to war, the ravages of time, and Disquiet. Though the Created seek to protect the wonders like a mother would a child, the Gentry have their own reasons for safeguarding them.

The last Imperial Dynasty, the Qing, was established following the takeover of Beijing. Masters of northern China, the powerful Great Qing successfully usurped weakened Ming rulers, but their rule was marked by their suspicious treatment of the Han Chinese. Despite this, the Qing emperors preserved centuries of Chinese arts and literature while searching for mummies rumored to be active in the area. Caught between the present and the distant past, mummies clash with Rival Arisen, sweeping Han Chinese hunters into their wake who must face many threats to uphold the Vigil.

One Thousand and One Nights – Islamic Golden Age (750 to 1258).
Beast: The Primordial and Vampire: The Requiem:

Aladdin. Scheherazade. Ali Baba. Sinbad. During the Islamic Golden Age, great strides in economic development and scientific knowledge occurred throughout the Islamic world and, at the same time, the tales of Scheherazade expose the wonders of magic to all. In this gilded era of human achievement, Kindred and the Begotten join forces to stay at the top of the food chain. Through their eyes, experience a thousand and one dreams…and nightmares. Who doesn’t like a good bedtime story?

Writing will begin on these chapters, as well as on any added Dark Era chapters once this Kickstarter is over. Having been through this process with the original Dark Eras Kickstarter, we believe this is the best way to create a strong set of Dark Eras for all of you.

Shepherding the writing will be developers Monica Valentinelli, Matthew Dawkins, and Meghan Fitzgerald.

If you are unfamilar with our Dark Eras books, here’s a chapter text sample from the first Dark Eras book, featuring Requiem for Regina, Vampire and Changeling in Elizabethan London: https://drive.google.com/open?id=0B7FqViticwNuUkhPaFpQY2I5eFE

And a chapter text sample from the Dark Eras Companion featuring Princes of the Conquered Land, Mage and Mummy in the Mutapa Empire of Southern Africa: https://drive.google.com/open?id=0B7FqViticwNuVDRSVFIzWGNMWkE ”

Think of the darkest periods of human history then add vampires, werewolves, mages, hunters, demons, and more as chronicled by Onyx Path. That’s the level of darkness for Chronicles of Darkness: Dark Eras 2.

For the wanna-lancers* of the world, Onyx Path is offering an interesting opportunity with the “Dark Collaborator” reward:

“You will be brought into the inner circle to participate in the creation of either one of the Dark Eras 2 chapters or our next Chronicles of Darkness project as a Consulting Developer. You’ll be included on every communication between the developer and the writers from the beginning to the end of the project’s creation.”

Instead of the usual chances to develop a NPC or item offered during other Kickstarter campaigns, this reward allows you to work with Onyx Path on an entire chapter of this project or their next product. It’ll let you dive in and see all of the parts and learn from one of the most important companies in the gaming industry.

* Wanna-lancer = a fan that wants to become a freelancer for RPGs.

“A new edition of Gaslight Victorian Fantasy for the Savage Worlds game engine.

“Gaslight is certainly more of a sandbox game. You are given the world, the rules and then let go. There is no over arching plot or theme like Rippers or Ghosts of Albion. It is, in feel, much closer to the old Ravenloft: Masque of the Red Death game. Which is pretty cool.” – Timothy Brannan (author of the Ghosts of Albion Role Playing Game)

Imagine a Victorian world, but not as history tells us it was, but as the literature implies that it was. Believe that the literature from the period were more than just stories, but instead first hand accounts of the events that happened in the world. Imagine a world populated by the lost boys of JM Barrie, the Beast Men of Dr. Moreau even tales of an immortal vampire named Dracula. Included in these are organizations bent of determining what is best for humanity, and they have launched a secret war against others so that only one will prevail.”

Their cover is glorious! It feels like every ounce of the darkness of the Victorian genre distilled into a single image. I could see this on the cover of Alan Moore’s League of Extraordinary Gentlemen. Are you ready for the pre-cursors to modern fantasy storytelling laid out for you to play? This amalgamation of powers and opportunities… this could be a glorious expansion to Savage Worlds! 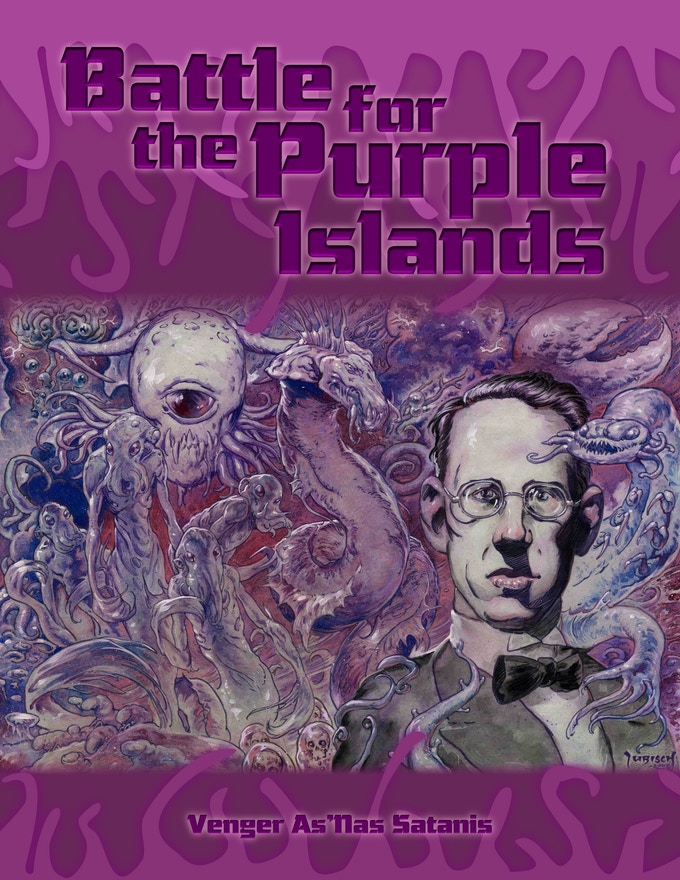 “The Islands of Purple-Haunted Putrescence returns; OSR scenario of warring factions competing for dominance in a purple world gone mad.

The Islands of Purple-Haunted Putrescence has done well as an O5R campaign setting. I’ve been asked countless times if I’m ever going to go back to the purple islands.  Well, this Kickstarter is a resounding “YES!” to that query.

The purple islands (there’s three of them very close together, and are usually considered a single place) is an eldritch science-fantasy setting with gonzo sword & sorcery.  Both books will be usable with any sort of Lost World, Mars, Dream Lands, Hyborian Age, alternate Earth ruled by civilized apes or menaced by dinosaurs and sleestak, or a world of savagery, super-science, and sorcery.”

Love. Me. Some. Venger. Through RPG, I’ve met a legion of incredibly nice folks. Jeff Duncan, Dan Davenport, Dan Dillon, Ed Jowett, Nathan Tucker, Chris Helton, Justin Halliday, BJ Hensley, and so many more that I’m forgetting. They’ve all been welcoming and I could not be happier to know them. High on my list of RPG friends is Venger. He’s helped me with direction, published some of my work via his recent NSFW Trinity of Awesome Returns series – Stairwell of V’dreen, His Flesh is Key, and High-Stakes Q’uay-Q’uar – and always been open to helping me along the path to RPG freelancer. When he launched his sequel to The Islands of Purple-Haunted Putrescence, I was happy to support it.

Why should you check out Battle for the Purple Islands? Because it’s unlimited budget grindhouse glory in the form of a RPG! It may be purple, but Venger creates some dark games!

Why should you support Venger? Because, if you’re like Egg and you want to create fantastic games, reach out to Venger on Google+ or at his blog. He has worthwhile advice (and books of advice) to share. He’s open and direct with what works and what doesn’t. He’s worth talking to.