I ran into Chris Miller of Chris Miller Games and Ankur: Kingdom of the Gods at Atlanta Sci-fi and Fantasy Expo, MomoCon, and, now, Origins Game Fair 2018. At MomoCon, I participated in an interview with Chris and I can tell you, he has some interesting stories about the origins of Ankur that are worth heading to his booth and asking about. Head over to booth 460 and say hi. 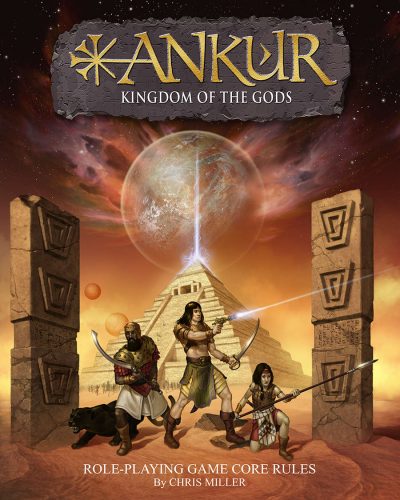 Ankur: Kingdom of the Gods – Kingdom of the gods is a sci-fi tabletop role-playing game based largely on ancient Sumerian mythology. The game takes place on Earth just after the great flood, some 25,000 years in the past. A species of Alien beings from the planet Nibir, in the farthest reaches of our own solar system, come to Earth to mine gold for the production of Mana. Through genetic manipulation, they create a variety of humanoid slaves to mine gold.

A series of cataclysms and power struggles set in motion events that will entwine the destinies of these species forever! Since the great flood many forgotten ruins and ancient alien technologies lay buried, awaiting re-discovery and exploration. Strange monsters roam the land, remnants of a pre-historic past, all but swept away by the hands of fate. Politics and treachery are around every corner as alien and humankind alike struggle to claim their place in this world. It is up to the players to decide the fate of Earth. Prepare to enter a world of pre-historic monsters, flying saucers, swords and sorcery. Adventure awaits you in…

ANKUR – Kingdom of the gods!

I met Christopher M. Miller at The Atlanta Sci-Fi and Fantasy Expo 2018 where he shared his ANKUR RPG system and setting. At Momocon 2018, he took the time to share not only the mechanics of the system but also why he built it and how he went about publishing it. Now he’s working a Kickstarter for its first expansion and he agreed to talk about that project.

EGG EMBRY – Chris, thanks for talking with us. Tell us about ANKUR: Kingdom of the Gods.

CHRISTOPHER M. MILLER – ANKUR is a sci-fi tabletop role-playing game based on Sumerian mythology and the ancient astronaut theory. It was the result of a successful Kickstarter campaign, and has been nominated for a GAMA award for best TTRPG of 2017.

EGG – You’re running a Kickstarter for ANKUR “Land of the first people”. What will this expansion offer?

CHRISTOPHER M. MILLER – ANKUR “Land of the first people” is a game setting supplement for the tabletop role-playing game ANKUR. The book details the city-states of Kumat, Meluha, and Zimbabwe (among others); located in the continent of Mundwazi (Africa). The book introduces new professions, skills, and weapons to help make characters from this setting more unique. Inside you’ll also find a host of new creatures, places of interest, NPCs, organizations and adventure hooks that will help GMs immerse their players in this expanded world.

EGG – You didn’t go with a standard RPG publisher for ANKUR. Who published this and how did that come about?

CHRISTOPHER M. MILLER – The game is currently being published by Ingram, and through them is available at Barnes & Noble, Amazon, and Drivethru-rpg. ANKUR is a “game”, but it’s not a board game or a card game, it’s a “book”. So, I went to the largest traditional book publisher in the world: “Ingram”. I have a Barnes & Noble store near my home, and in fact, I wrote most of the game while sipping expensive coffees in their café. I wanted to be able to walk in a B&N store and see my game on their shelves. I have succeeded in this dream, but the truth is, most gamers buy their games from game stores not book stores. All my merchandise is currently print on demand, which is very convenient for direct online sales to customers, but frowned upon by many game distribution companies, who prefer a very specific supply chain. Breaking into this exclusive supply chain can require both popularity and huge investments. I’ve currently got some very promising leads with several game distributors here in the South-Et. We’ll see what happens.

CHRISTOPHER M. MILLER – 1D12. All you need for this game is one twelve-sided die. Any time you want to attack or make a skill check, just add the appropriate Aptitude score to your skill circle number; the result is your “APN” or “Action Potential Number”. In order to make a successful attack or skill roll, the object is to roll your D12 and score equal to or lower than your APN. A roll of a 1 is always a success (but not a crit) and a roll of 12 is always a “critical failure”. In order to score a “critical success”, you must roll your exact APN. Virtually all forms of conflict resolution involve an APN or Action Potential Number. 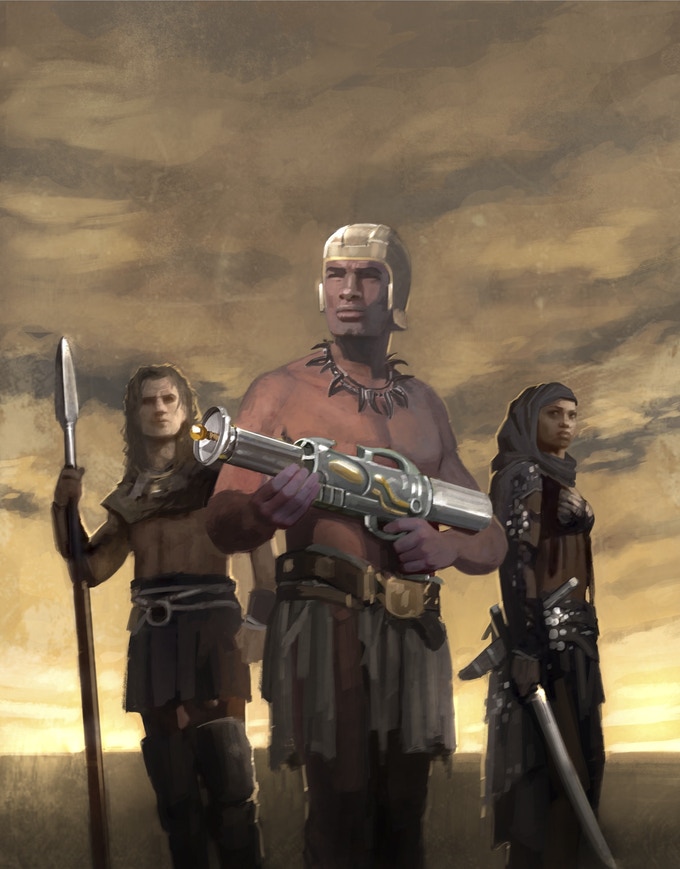 EGG – What do you see as the secret sauce for the system? What’s the mechanic or setting that makes this a gamer’s go to system/setting?

CHRISTOPHER M. MILLER – Well, there are two aspects to game play in ANKUR that have become fairly popular: Karma points & the fact that if you die, you can continue playing as a ghost.

One thing that has always annoyed me about TTRPGs is unfortunate/untimely character death. Often in such instances the player is forced to sit out the rest of the game twiddling their thumbs. This is compounded by the generally lengthy process of character creation. I really began to contemplate this when a play-tester suffered a deadly wound during the first round of combat. It is no fun to have a character die, and while it may sometimes serve the story, sometimes it also makes a better story to have the slain character complete their mission. I’ve always been interested in the paranormal and thought it might make an interesting addition to the game. Characters who choose to become ghosts gain the ability to fly, walk through walls, possess the living etc. But they must also feed vampirically on the living in order to exist between worlds. It is also technically illegal to feed on humans, and there is a special class of psionic ghost hunters who protect the living. It can make for some very cool game play.

EGG – What was the game that got you into gaming? 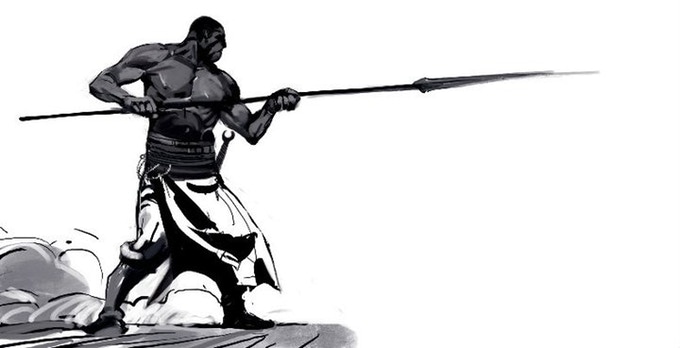 EGG – When you’re not working on ANKUR, you’re active in the wider genre community, what else do you enjoy working on?

CHRISTOPHER M. MILLER – Well, my wife and I have been doing the Rocky Horror Picture Show live on stage every Friday night at the Plaza theater in Atlanta for the past 16 years. I was an avid LARPer for over twenty years, and I was a guest liaison at Dragon-Con for over ten years. Nowadays, I mostly write at home with my pug.

CHRISTOPHER M. MILLER – I’m working on a new card game called: Role-play Roulette. Basically, it will be a fast, easy card game that I hope will become a gateway for card-gamers to get into TTRPGs.

EGG – Any parting thoughts? Where can we find out more about ANKUR and this Kickstarter?

CHRISTOPHER M. MILLER – You can find all of my products (core rules, maps, adventures, short stories, GM screen etc.) at Drivethrurpg.com. The core rules book can be ordered through Barnes & Noble or Amazon. The Kickstarter for the African setting expansion: ANKUR “Land of the first people” is currently live but ends April 1st. I’ll be appearing at Momo-Con, Outlanta-Con, Origins Game Fair, Atlanta Comic-Con and Dragon-Con. Thank you.