Welcome to the third annual edition of Top 7 Words. For the next hundred or so years, it’s a safe bet to expect one of these to spring up in your face annually. I briefly considered making this year’s theme about the Worst Words of 2015, but I figure everyone already hates bae, yolo, and thot enough to pretty much cover it.

1. Deflate – to release the air or gas from something inflated

Unless you’ve lived under a rock for the last seven months, you know that my son and I deflated the footballs used by Tom Brady and the New England Patriots. But seriously, as a football nut and a regular user of NFL footballs, I laugh to myself every time I hear about a pro QB taking the air out of his balls. Why? Because unlike many of them, I like my balls (no pun intended) inflated to the point of bursting. Just ask the KGFL. They all hate me for it.

2. Bachelorhood – the state of being a bachelor

Because honestly, who’d want to live any other way? I’m mostly kidding. I know marriage has its good points. Married guys live longer, get more action, have more money, and enjoy a host of other benefits. And yet here I am, the only unmarried guy on my entire block. Seriously. Thirty + houses…and I’m the sole bachelor. It feels somehow liberating, somehow kingly. When my neighbors sigh and tell me Friday night will be spent watching Netflix (again) with their never-put-down-the-cell-phone wives, I feel freer than ever in my life.

3. Proliferate – to increase in number or spread rapidly

In 2015, my writing career took leaps and bounds above previous years. I published nine books, more than fifty web articles, and sold hundreds of stories here in the US and abroad. I feel like a virus, infecting my host (Earth) with reckless abandon. Aside from all that, I love the word proliferate. It implies something is unstoppable, maybe even invincible. Yeah. That.

4. Wine – the fermented juice of grapes, made in many varieties, such as red, white, sweet, dry, still, and sparkling

Every time I open my Facebook or Twitter profiles, I see the word wine. I’ve begun to think my kid is the only one who doesn’t drink the stuff. For dinner. At midnight. For breakfast. Whatever. I love the stuff, but that’s not why I love the word. I’m amused by housewives whose every other meme is wine-related. I smirk every time I see a woman’s dating profile with a ‘I love wine’ mention (because almost all of them do.) Apparently the world is always drunk…or at least trying to be. 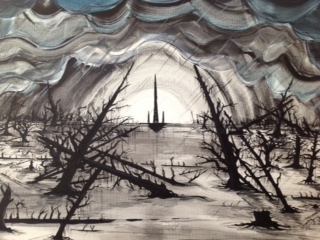 About a year ago, I started painting. A lot. I try (and often fail) to imbue my canvasses with specific undertones. I want viewers to feel the rain, sense the cold, and shiver as though whatever they see is haunting.

6. Feminist – advocating social, political, legal, and economic rights for women equal to those of men

Before I start, let me say I’m not anti-feminist. Equality is awesome. Fairness is a something usually worth striving for. That said, I like the word feminist because when someone else uses it, I can predict without fail where the conversation is going. Admit it; so can you. Either people will leap to profess their feminist support, crush someone else for not being feminist enough, or (if they’re brave) start an argument about how the world was better during the Mad Men era. Me? I’m not political enough to even touch the whole feminism discussion. The rest of the world has it covered.

7. Swipe – to move a finger or fingers, or a stylus, across an area on (a touchscreen) in order to execute a command

During my brief tenure on Tinder (and other similar dating apps) I’ve learned this much: Swiping left is shallow…but fun. I’ve pretty much swiped left for the entire Atlanta metropolitan area. Hell, I don’t even log on with the hope of meeting anyone. Never really have. I just swipe left a few thousand times and continue yucking it up with my friends. Pointless. Stupid. Entertainment.

Enjoy this? Check out My Top 7 Words of 2014 and 2013. Previous editions were darker in tone than this year. Whatever…

Check out my chilling short stories Old Man of Tessera and Let the Bodies. In which I use real words.