Ages ago, I was a student in a small Atlanta art school.

I wasn’t searching for a degree. Or a job. Or to become the next Boris Vallejo, HR Giger, or Picasso.

I just wanted to learn how to draw. Particularly people. Especially beautiful bodies and faces.

After I finished school, I ended up getting married, having a kid, writing books, and falling out of touch with the artsy young dude I’d once been.

Over the last year, my world has stabilized. Once full of turmoil, I now enjoy relative peace.

Which means more time to paint. Sketch. And draw. Usually while sipping red wine beneath the setting sun.

One of my favorite topics has always been the female face. It’s elegant in a way no other subject matter can match. That’s not to say I don’t love all other forms of art, just that I find relaxation in the challenge of painting human expression.

So today I’d like to share some of my work. Some of these are what I’d consider ‘failed’ pieces, being not up to my standards. Others are small successes. While I still consider myself to be a weekend warrior (at best) I’m getting better with each piece.

…and enjoying every second of the process.

Here’s a recent tiny (6″ x 8″) piece I did. I almost, almost, almost left it the way it was on the left. The mere suggestion of a face is sometimes enough. Nevertheless, I ended up finishing it up and naming it Callista, after a tragic character in this book. 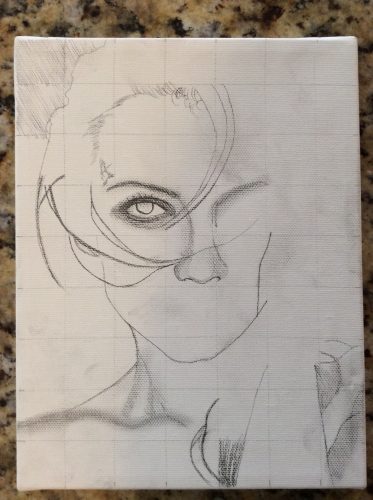 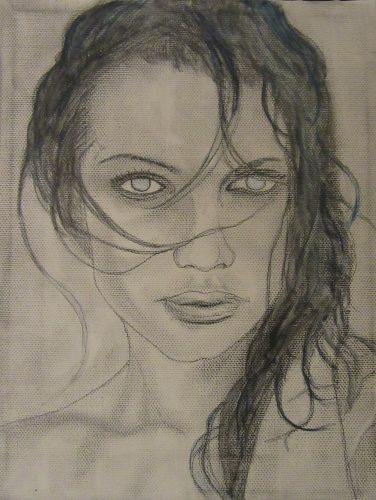 Here’s another one I almost left alone after the initial sketch. Valeria’s look is completely different before and after I added the crazy watercolors. On the left, she looks pensive, maybe even regretful. On the right, she looks more like a warrior princess. I sometimes struggle with loving/hating a piece after I move beyond the initial sketch phase. Still, despite the unusual color scheme, Valeria is framed and hanging on my wall. 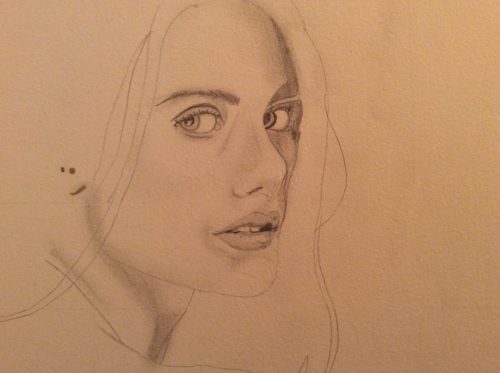 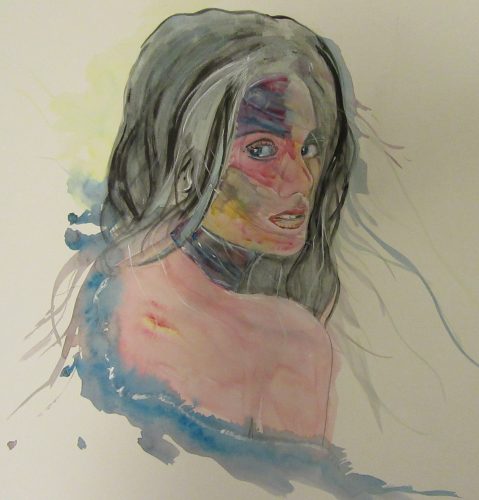 After finishing this one, titled Ashes for Ande, I suffered no such post-color regret. The sketch looked ok, but the inks and dark acrylics worked out really well. This painting popped off my brush with ease. I had a character in mind (from another of my books) and the outcome matched what I’d imagined. Ashes for Ande might be my favorite. Maybe. 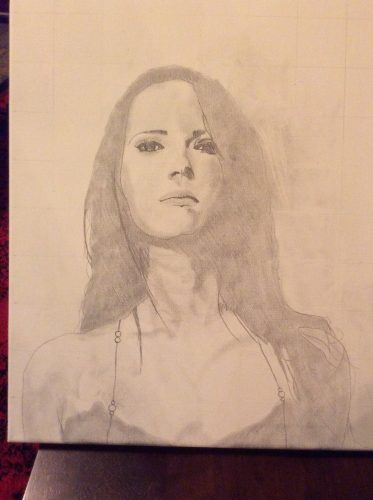 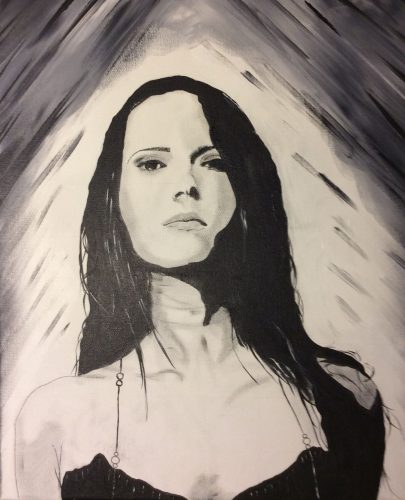 Mother of Midnight is and probably always will be the most challenging thing I’ve ever painted. The sketch alone (performed on a 24″ x 48″ canvass) took a week. The deep graphite, inks, and shading took another twelve days. I still haven’t snapped an ideal photo of Mother of Midnight. The trouble with photographing graphite is that it tends to reflect light, thus dulling the image. Oh well. Here she is: 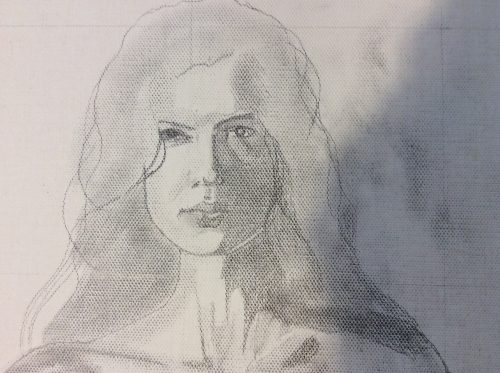 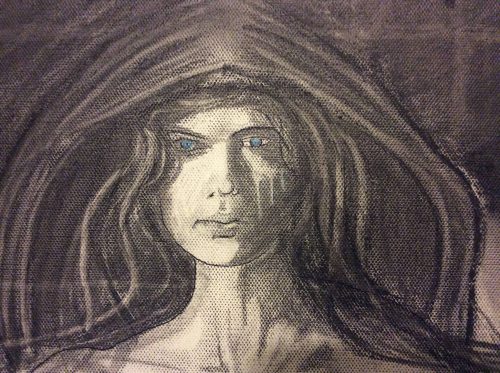 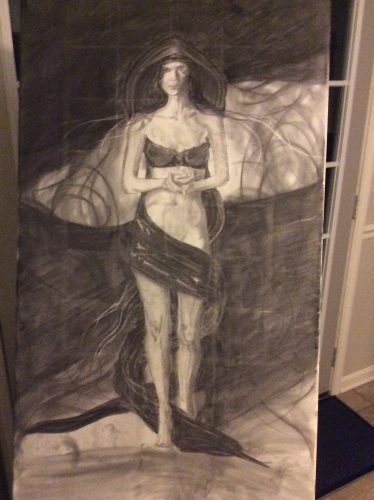 For this tiny (6″ x 6″) piece, I imagined a dryad leaving her ancient forest behind. I sketched her, inked her, and then let the golden watercolors drip. Her name is Sylpha. You like? 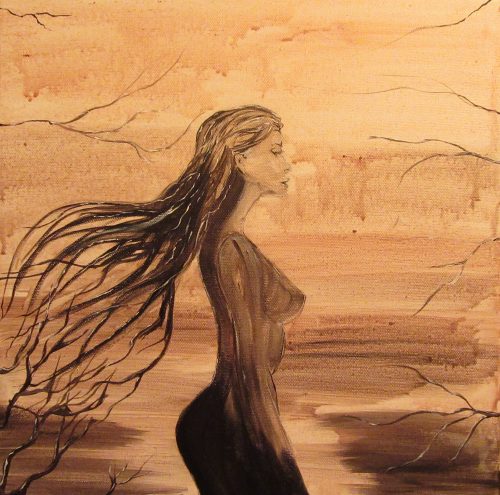 Emme, the Pale Queen is a portrait I did for a friend. My latest gig has been to draw real-life people, but with subtle fantasy elements added.  In this case, she got a few green face tattoos and a whip of black hair tightened to her throat. I really liked how Emme’s eyes turned out. Her look suggests complete confidence. 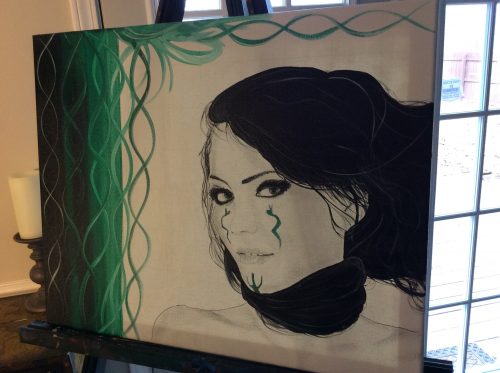 The Sorceress is a piece I tried (as in really tried) to sketch and swear to leave alone. I made myself promise not to go in afterward with colors and inks. Apparently, I can’t keep my oaths.  A few days after I finished the sketch, I sipped too much wine and broke out the color. For a little abstract addition, I left half of her hair untouched. She looks dangerous, no? And I’m glad I smashed my promise. I like her better now. 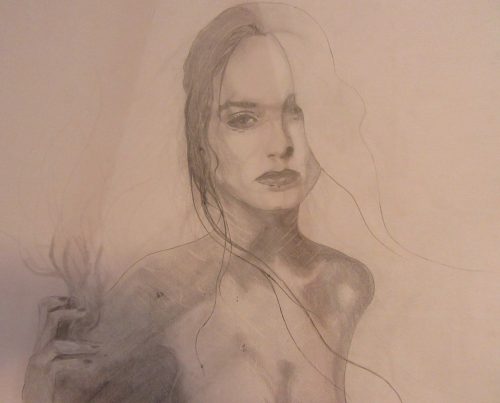 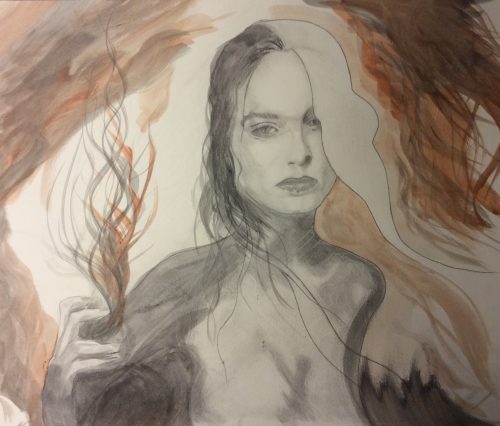 Ah, the treacherous nature of adding color. This is one piece I wish I could go back and redo. There’s something about her face that’s not quite right. Even so, I couldn’t bring myself to trash this one (titled ‘Last Glance’.) If for no other reason, I hold on to her to remind myself I have lots of room for improvement. 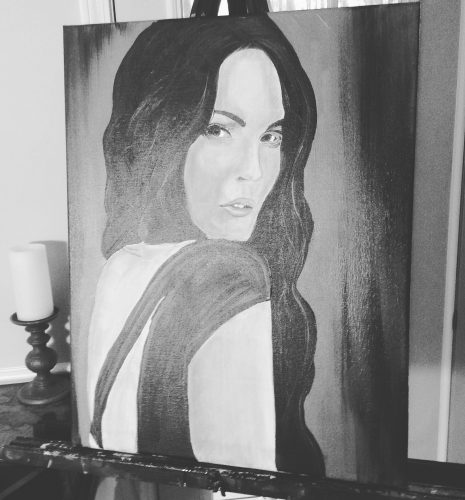 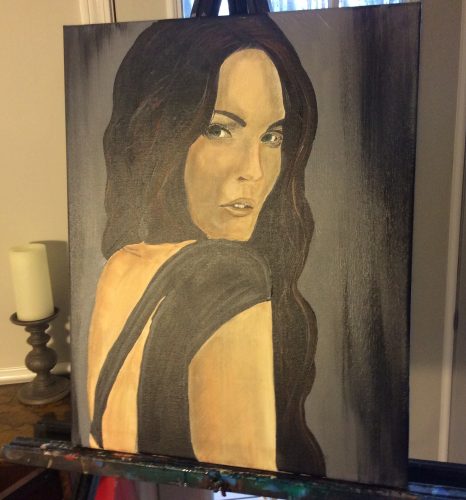 For a true challenge, try sketching the intricate musculature of a woman’s shoulders and lower back. It’s no easy thing. For ‘Blood Princess’ I wore a few pencils down to nubs. And now she’s undressed to kill. 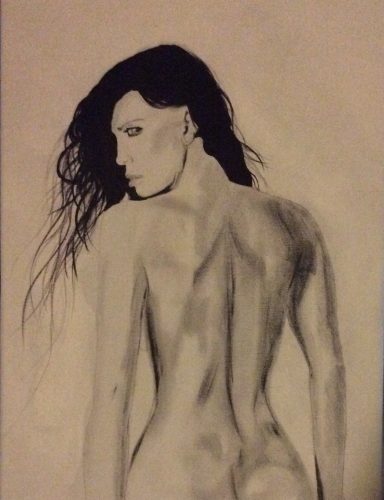 This is my most recent piece, titled Angelic. The original sketch was fairly NSFW, but after I added an ethereal gown and some ghostly yellow-gold watercolor, she’s slightly SFW. Maybe. For a real challenge, I used almost every media available to me, including pencils, inks, graphite powder, charcoal, acrylics, and watercolors. Next up: framing her. 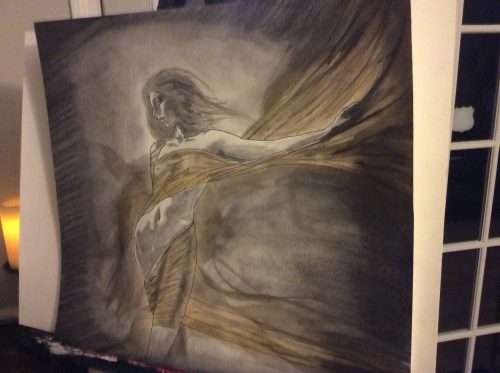 For even more paintings (most of which aren’t women) go here.

To start a conversation with anyone on the planet, get into this.