When I attended Free Comic Book Day last month, I had to remember my pitches for my comics and novels again. When you are at conventions, you need your one to two line pitch for each of your products because the window you have to catch someone’s attention is measured in seconds sometimes. And since it had been a little while, I needed to practice a little bit as the day progressed… which hopefully meant that I got a little better at it each time until it was closing time.

The other aspect of this event was that, for the first time, I was selling copies of The Echo Effect. And I didn’t really have a 2 line sentence to pitch the book. This is what’s on the back of the book:

A select few know the truth about our world: every time the calendar approached the year 2025, the world resets and creates a new Earth, with a new history for each of us. The Awakened remember their previous lives, and throughout history, many of them have done their best to ensure that the world proceeds on a particular path.

Aaron didn’t feel lucky. Trapped in this loop, forced to live again and again in half-remembered lives, his current reality was spiraling out of control. His wife and his best friend thought he was losing his mind, and the worst part was they might be right. Another existence filled his head, mixing false memories with his real ones until he wasn’t sure of the truth.

That’s not the easiest thing to potentially sell someone on for the handful of moments you might have their attention. But as the day went on, I tried a different tactic. I hit them with something like this:

“We’ve all had that experience where we walk into a room and things are a little out of place. Or those conversations with friends where they talk about an event like you were there, and you have no idea at all.”

When they nod or say “yes”, I tell them “That’s what this book is about. Helping me to deal with exactly those sorts of moments that have happened in my own life. 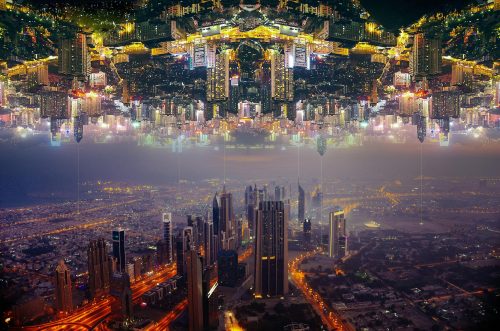 Image by Octavian A Tudose from Pixabay

And here’s the thing – that is the reason why I wrote The Echo Effect. It directly stemmed from 2 incidents (one which appears exactly in the book and one is somewhat in there):

One day after work I went into our master bathroom and all of my things had been flip-flopped with my wife’s things. But it wasn’t just the counter space on top, no, the cabinets beneath had been completely changed. Now, obviously, my wife had decided to make the change for better functionality or just whatever worked better for her, but it also meant for a couple of weeks I would go to the wrong sink or look for the towels in the wrong place.

The other incident went back to sometime in my 20s. A group of us were hanging out one day and because we’re all big nerds we were talking about Atlantis. At that point, Mike looks at me and says “I’m still mad at you about that.”

“Yeah, that book we checked out on Atlantis, well, I ended up getting a late return fee on that. And the only reason I borrowed the book was because you told me to.”

I looked at him completely dumbfounded. You see, I have zero memory of such an event. ZERO. He was convinced that I was to blame no matter how much I protested I had no idea of the incident at all.

Now, taking these as just two random incidents would have been fine, and I likely wouldn’t have made any connection, but something stuck in my brain. This idea of someone who lived multiple lives and dealt with these incidents all the time. How would he deal with such things? What would it mean that they weren’t just the randomness of the universe, but potentially something bigger at work.

And what if he wasn’t alone in living through it.

I’ve come to realize that writing, for me, is mostly about trying to work through my own thoughts about the world, my life, or just weird events that I’ve experienced. It’s a weird form of therapy to take these oddities and put them into a fictional format. Yet, I think it helps on some level to think that while I might not be reliving my life over and over, maybe there is a reason for the weirdness.

All I know is that I will have to write another book the next time it happens.