I don’t know if I was any different than anyone else in class the first time we were “forced” to read Romeo and Juliet. The language was strange. The story felt too familiar – like I’d seen it a hundred times if I’d seen it once. And the idea that they needed to come up with some elaborate plan of faking death in order for the two lovers (who’d known each other about an hour before Romeo proposed to Juliet). It was just… too much.

But I didn’t hate it. I’m not sure I can fully remember how I felt about it. Just one of those things that you have to do in school. You read it, take a test or two on the material, and move on to the next classic. Occasionally they will lead you to someone becoming a favourite author (thank you Jack London for “To Build a Fire”). Sometimes you realize how much of a non-fan you are (Mr. Dickens, I’m looking at you). 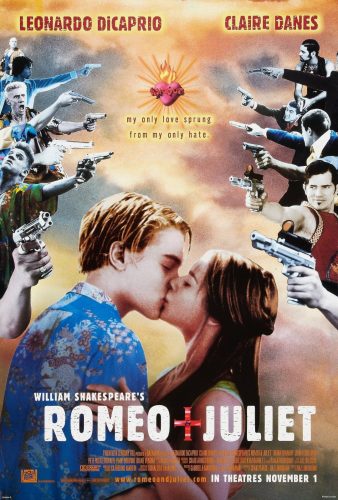 Weirdly, it was the 1996 version of the play starring Leonardo Dicaprio and Claire Danes where I think I started to understand the story. Whether it was the modern setting, the delivery of the lines… maybe just hearing the words rather than reading them. Or maybe I was just in a different mindset 4 years after I’d initially read the tale. Maybe I had more knowledge about the idea for the reason I thought I’d seen the story over and over… it was because everyone was using it as a basis to tell a certain kind of story.

And with watching, the nuances of the actors’ performances lend themselves to seeing how even if I didn’t catch every word, I knew what the characters were trying to convey. Those little pieces that are completely missing from a read through.

I probably haven’t seen that version of Romeo and Juliet in over a decade, at least. But the Shakespeare Tavern in Atlanta puts on the play for the month of February. Courtney and I had been threatening to go and see a play there (lived here how many years and never went, what’s wrong with us). So we finally made it this past weekend.

Have you ever had one of your favourite songs come on and for some reason, it has a slightly different context than it ever had before? Maybe you hear a group of lyrics for the first time or just are in a different moment in your life… and suddenly the song is different for you. That was this performance this weekend. It was the same play and yet little moments caught me by surprise.

Overall it was a great night with the words of the Bard ringing in our ears. I look forward to visiting another of his timeless tales there in the future.