As children, who among us dreamed of being an office worker when we grew up?

Say it again slowly: None. Of. Us.

Office work? Pshhhh. We kids had huger ideas. We dreamed of being astronauts, doctors, fighter jet pilots, quarterbacks, world travelers, and movie stars. We imagined big things, challenging things, awesome things. Now…some of us actually realized our dreams. Some of us went to school, nurtured our talent, and climbed mountains to reach the top. And I salute those people. Well played. Well done.

On the flip side, some of us ended up like this dude up above. Sticks and bones. Eyes glued to a screen. Cogs in the corporate machine. And are completely fine with it. Do a job. Get a paycheck. Go home and forget work even exists. Equally admirable.

But still more of us (the majority, I bet) lie somewhere in-between. We who exist at work, but don’t thrive in it. We who kick ass at our jobs, but ache for something more. We who do what needs to be done, but know in our hearts happiness lies in some other place beyond our desks, our computers, and our monolithic stacks of paper, files, and utter boredom.

“It’s not just about me and my dream of doing nothing. It’s about all of us. I don’t know what happened to me at that hypnotherapist and…I don’t know…maybe it was just shock and it’s wearing off now, but when I saw that fat man keel over and die – Michael, we don’t have a lot of time on this earth! We weren’t meant to spend it this way. Human beings were not meant to sit in little cubicles staring at computer screens all day, filling out useless forms and listening to eight different bosses drone on about mission statements.”

It’s a funny movie. But between the jokes lies a grave truth. The world of soul-sucking, mind-numbing, keyboard-pounding office life is real. I know. I live it.

They say that in life if someone wants something badly enough, one can have it. With hard work, perseverance, and blah, blah, blah, one can throw off the shackles of one’s past and forge a newer, sharper, more satisfying existence. I’ve read books on it. Every other Facebook post hints at it. I hear people talk about it. Cat posters everywhere scream it.

The longer I sit here.

The more I feel myself becoming this guy: 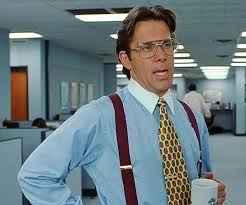 It doesn’t matter that I forget about work the moment I leave. Or that I remind myself life could be much, much worse. Doesn’t matter one bit. Every dawn I march to work, I die a little bit inside. I fear someday I’ll wake up wearing an ugly tie and suspenders. Or that I’ll make guest appearances in my employees’ dreams…banging their wives and girlfriends with a cup of coffee in hand. I don’t even drink coffee.

Normally this would be the part where I beg you, my readers, to buy all my books and rescue me from this life. But no, not today. Today I just wanna vent. To wage a mini-war against my inner Bill Lumbergh, and to call for solidarity amongst my office slave by day/creative warlord by night brethren.

It will happen for you. You will defeat your office life.

Ok. No you probably won’t. But even so…

That’s why they invented wine.