EDITOR’S NOTE – This article and the links are NSFW.

Venger Satanis, high priest and bill payer for Kort’thalis Publishing, is one of RPG’s hidden helpers. He let John McGuire, Leland Beauchamp, and I play in his universe a couple of times. For me, he’s been a great source of advice as I pursue an RPG freelancing career. He’s produced books, contests, and is open to original ideas. I think that, in five or ten years, a number of RPG freelancers will have cut their teeth doing gonzo jobs at Kort’thalis Publishing. Because he’s had a variety of experiences as a creator and publisher, I knew when I started this RPG interview series that I wanted to talk to him. With the Kickstarter for his latest system/setting, Gamma Turquoise: Santa Fe Starport, running, now’s the time! EGG EMBRY – Before we get started, that picture I photoshopped of you and the purple noodles, that’s going to be the Venger bio pic for the article. You’re welcome.

Gamma Turquoise: Santa Fe Starport is your 13th Kickstarter and it’s running now, what it’s about?

Specifically, there’s some kind of mysterious cult leader who’s threatening the starport in Santa Fe. There’s also a mutant uprising and various wasteland factions at each others’ throats.

EGG – For Kort’thalis Publishing, what are the games/settings that you support and how does Gamma Turquoise  fit into them?

VENGER SATANIS – The original three are Crimson Dragon Slayer (dark science-fantasy), The Outer Presence (investigative horror and eldritch pulp), and Alpha Blue (space opera smut). At the moment, I’m working on a vampire RPG called Blood Dark Thirst. All of these use some variation of the same basic system – VSd6. It’s OSR, but with d6 dice pools instead of the d20.

Gamma Turquoise is sort of its own thing while the setting/scenario is compatible with Crimson Dragon Slayer and Alpha Blue. Also, there will be some OSR conversion stats to make it even easier to use with standard d20 RPGs. 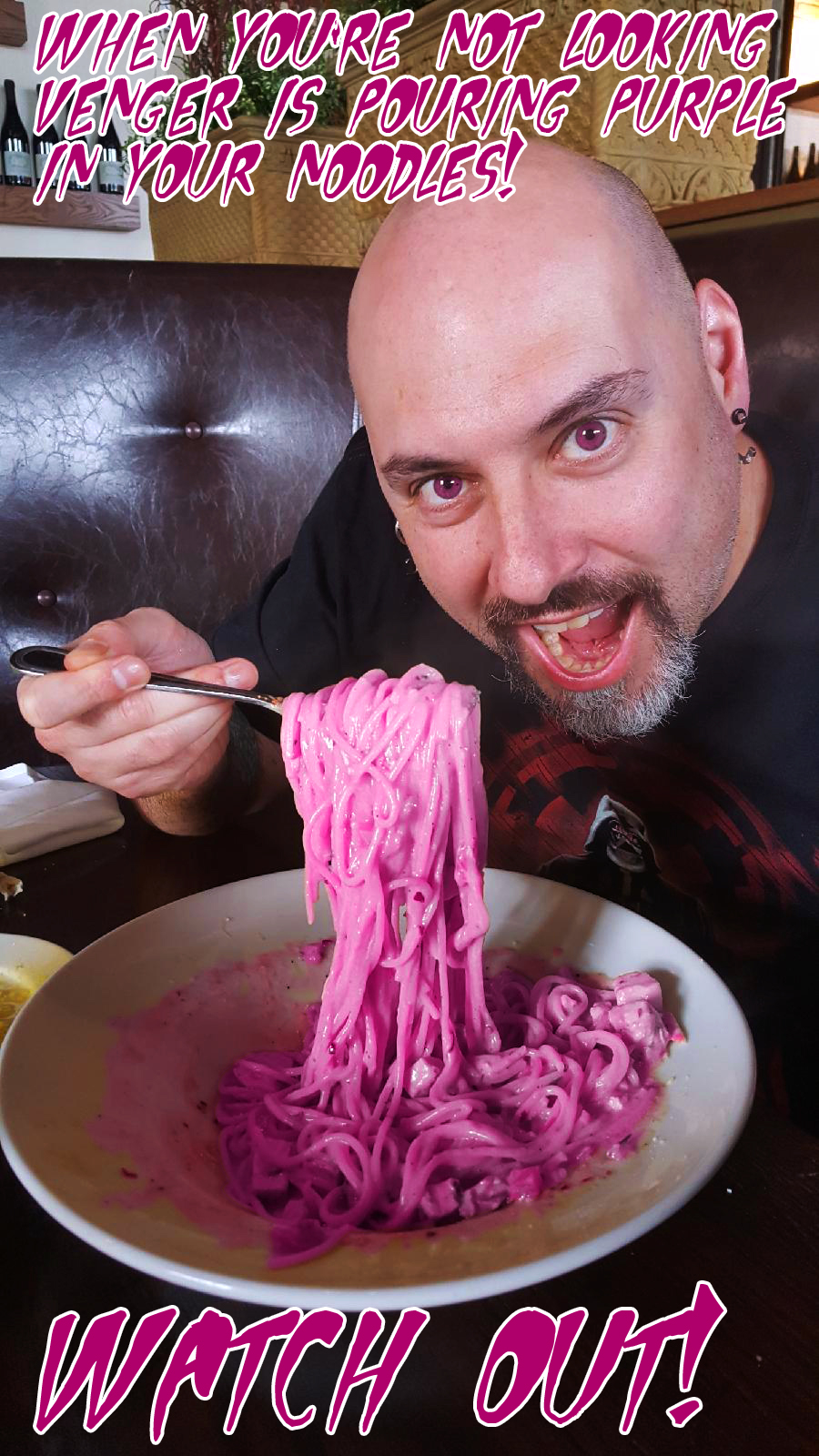 You’d buy a RPG from this man, right?

EGG – You use a house system. Can you tell us about it and why you developed it?

VENGER SATANIS – I’ve played one variation or another of D&D since 1984. I was there at the height of the d20 boom in the early 2000s. This was before the retro-clones and OSR, but everyone was doing d20 to the point of ridiculousness.

While I love, respect, and occasionally use traditional OSR (the first three waves) and games based on D&D, I don’t think that system is ideal for every RPG. I love variety and wanted to use my imagination to come up with something that felt old school but was also new and completely different than d20 – though more or less compatible with everything stemming from D&D.

My games use Armor instead of Armor Class, Health instead of Hit Points, and a dice pool instead of attack bonus or challenge rating. So, going back and forth is rather effortless. But for the sake of convenience, I’m going to add in a number for AC (both ascending and descending), etc. 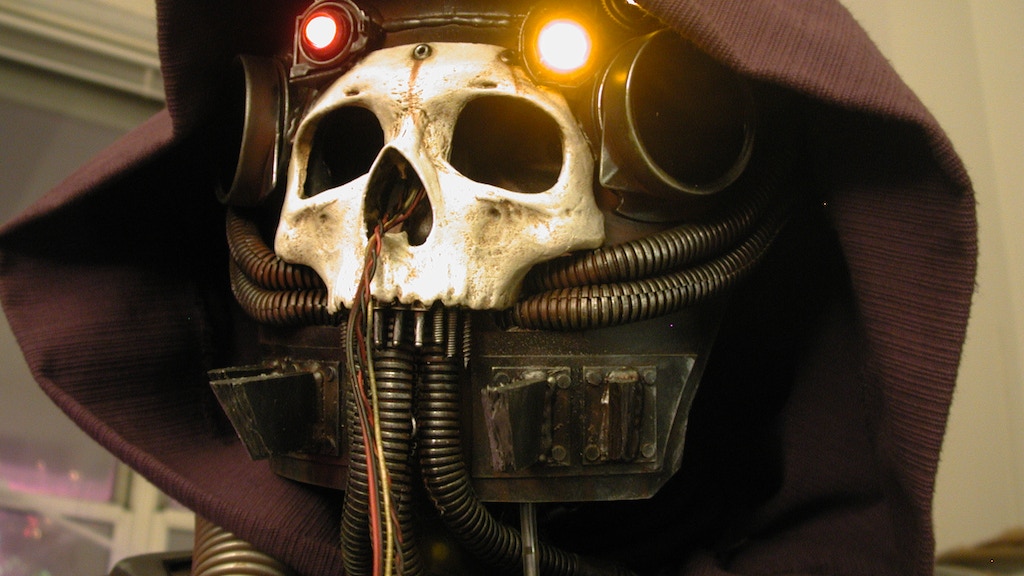 EGG – Can you highlight one pledge level/backer reward that you think is the standout for Gamma Turquoise?

VENGER SATANIS – Of all the things I’ve created, my favorite would have to be Alpha Blue. It’s a comedic, vintage, over-the-top scifi sleaze-fest. Alpha Blue feels original, even though I just combined a few things that are pretty common – and added sex, which is less widely represented in the world of RPGs.

The $23 tier is a bundle including Gamma Turquoise and every PDF I’ve put out for Alpha Blue so far. There’s a lot of stuff, supplements and adventures, and I’m excited for gamers to discover the entire line and see what all the fuss is about.

EGG – I wrote a RPG Kickstarter review where I mentioned I didn’t have a mentor and you read it and reached out to offer yourself as my High Priest. You gave me some great advice and help and some opportunities and I want to thank you for that. Since that time, I’ve seen you be open and always willing to help other gamers and give back to the community; can you talk about what else you’ve done to expand the Venerable Society of Venger Satanis?

VENGER SATANIS – Before you completely ruin my reputation as a badass, let me say this: those who come at me hard and fast, disrespectful and idiotic will get shanked by me in the comments section of wherever I happen to be. 90% of the time, I’m a super nice guy, very accommodating, and chummy with my fellow gamers. But a few have felt my wrath because they wronged me and I let them know about it.

Aside from all that, I wanted to give back to aspiring scenario writers with a contest inspired by my recent guidebook Adventure Writing Like A Fucking Boss. It’s just a short PDF but it contains the foundation for awesome adventures. Those who submit an original scenario have a chance to win the $500 + publication grand prize!

What can I say? I love to teach, I love to write, I love to experiment, and I love to roleplay and talk about roleplaying games. EGG – Your work embodies gonzo-gaming and you’re pushing the envelope. What do you consider the holy grail of gonzo-games?

VENGER SATANIS – Hmm, good question… there are at least three different kinds of gonzo. For something like “retro-stupid” silly gonzo, I’d say Encounter Critical is way up there. An example of corporate gonzo would probably be something like Rifts – it fulfills the basic requirements yet the execution doesn’t really do it for me. And then there’s gonzo that sprang from the old school “fun house” dungeons that threw everything but the kitchen sink in there. A fairly recent OSR representative of that camp would be Anomalous Subsurface Environment.

Personally, I try to ride the edge between “retro-stupid” and old school “fun house” because that’s where the awesome is.

VENGER SATANIS – I started with the magenta box, so that’s how it all began.

The hobby of RPGs is so vast that one almost has to qualify what they mean in order to not be misunderstood. For instance, when I say that I’d love to run an RPG next weekend, I’m thinking of fast and loose, rules-light, player-determined old school type games. The gamer standing next to me might be thinking of D&D 4th edition, and the guy standing next to him may have a story-game in mind.

It’s the same with music. If I was on a road trip and a friend wanted to pop in a CD (I’m old – you’re lucky I didn’t say cassette tape!). I’d probably (wrongly) anticipate David Bowie or Ozzy Osbourne or Depeche Mode. There’s music coming out today that I know nothing about. A person’s age is one factor, but their taste is another.

All the games I’ve run/played in the past have contributed to my RPG education and have changed my gaming philosophy on some level. Everything from TMNT and Other Strangeness to WEG Star Wars to Paranoia and Call of Cthulhu. EGG – Why did you create your gaming company, Kort’thalis Publishing?

VENGER SATANIS – Because I couldn’t find a publisher for Liberation of the Demon Slayer. I got close a couple of times, but it just wasn’t a perfect fit for anyone. So, I decided to self-publish and created Kort’thalis Publishing.

Being my own boss gives me the freedom to do things my way at my own pace and up to my standards.

VENGER SATANIS – People love print! PDFs are handy and are fairly well liked, but softcovers are still in demand. Unfortunately, I don’t have the time for that like I used to. 5 kids, wife, day job, etc… but one day, I will again. EGG – I just did Paizo’s customer survey so it inspired this one – If you could ask your customers just one question, what would it be?

VENGER SATANIS – I’d love to know what I can do to not just foster sales but frequent use of my RPG stuff. I want people to play weekly sessions and bring new people into the hobby and run year-long campaigns! Blogging about it would also be nice, but I’ll settle for just knowing that gamers are consistently using the things I write.

EGG – Any parting thoughts? Where can we find out more about Kort’thalis Publishing?

VENGER SATANIS – You can see what I’m up to over at Venger’s Old School Gaming Blog: http://vengersatanis.blogspot.com/

From there, you can get to all my products, Draconic Magazine, and find out any news that pertains to me, like conventions I’ll be attending, what I’m currently working on, bonus content, reviews, etc.