First and foremost, posts are coming.

Wanted to kick things off though with a new release announcement. If you’re looking for some awesome comic books, and sci-fi adventure check out some new offerings that I’ve written below. 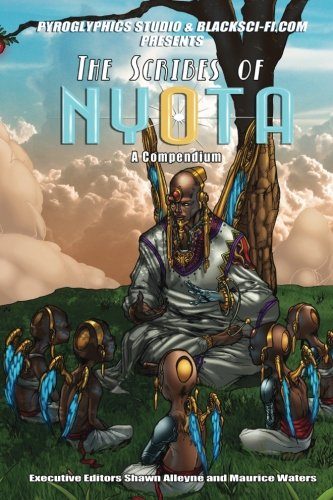 The Scribes of Nyota: Our Voices, Our Imagination, A Compendium

Edited by Maurice Waters, President of BlackSci-Fi.com and Creator Shawn Alleyne of Pyroglyphics Studio, “The Scribes of Nyota” aims to inspire imagination, while shining a light on a segment of society whose stories aren’t often heard.

Definitely check out the book because there are a collection of awesome stories and art to be found in the anthology.

The Crossing: Moonlit Skies, tells the story of two dimension hopping heroes, who find themselves on the run from crazy moon god worshiping acolytes.

In other words, for our protagonists, a typical Monday.

There’s gun play, hover trains, snappy dialogue, and high action. The story acts as sort of an interlude within a comic book series concept that fellow Tessera Guild member/ novelist/ comic book writer John R. McGuire and I have come up with.

Stay tuned for more news on the comic book series, but for now you can take a dip into the world of The Crossing by picking up the anthology here. 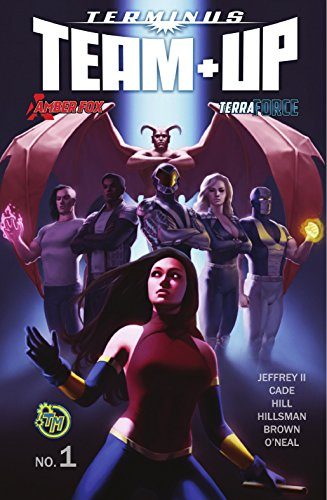 Not you intrepid reader! You can find all this and more in a story I wrote titled Terminus Team Up #1: Amber Fox vs Terra Force.

A description of the book reads “Amber Fox is just your regular dimension hopping acquisitions expert. But sometimes you end up needing to take a job from the more shady of characters. So when Amber is hired to steal a rare item of note from a team of super-powered individuals known as Terra Force, she may have overstepped her bounds. And let’s just say that Terra Force don’t take too kindly with people breaking and entering…”.

You can also pick up Tessera Guild member John McGurie’s second issue in this series that takes place in the world of his creator owned project The Gilded Age, here.

And more posts are coming, I swear.

Robert Jeffrey II is an award winning journalist whose work has appeared in such publications as UVC Magazine, JaDore Magazine, BlackSci-Fi.com, and The Atlanta Voice Newspaper. He is currently the Editor In Chief for BlackSci-Fi.com. He is a regular contributor for the Tessera Guild, and his comic book work includes client work for the Centers for Disease Control, and Nitto Tires. His comic book writing includes work on such award winning/ nominated series as his creator owned series Route 3, Radio Free Amerika, Terminus Team-Up, and Soul of Suw. He’s yet to fulfill his dream of pop-locking to save a community center. Head to his website at www.robertkjeffrey.com, and you can follow him on Twitter @SYNCHRKJ, Tumblr @robdawriter , and Instagram @robertk.jeffrey.
View all posts by Robert Jeffrey II →
Tagged  comic books, Science Fiction, Terminus Media.
Bookmark the permalink.