I attended opening night, and, again, for their tenth performance, getting a feel for the play from wet paint to shine. Instead of treating this production as a minor work for a 200-seat theater in a restored schoolhouse at the northern edge of metro Atlanta, everyone put in the hours and effort to make this as polished as any equity performance at the Fox Theater in downtown Atlanta. Both showings were a triumph of storytelling and a joy to witness. 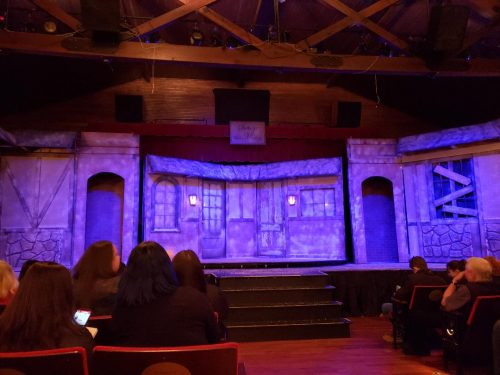 THE STARS OF THE PRODUCTION: THE SET

For the audience, the look of the world upon the stage is a critical first impression. To bring 1800s London to life and accommodate a variety of locations onstage, G. Scott Riley built a revolving stage with transformable wings on each side. Utilizing the entire space, the effect is a widescreen view of the fronts and rooms of Dicken’s world. Actors can enter stage right, speak to Londoners in the street, step onto the revolving stage, open the door to Scrooge and Marley’s, and enter into the office as three stagehands seamlessly rotate the platform to display the interior to the audience. Combined with outstanding wardrobe by Cheryl Rogers (whose singing voice in the play should be celebrated), makeup, and lighting, these production values exceeded my expectations. 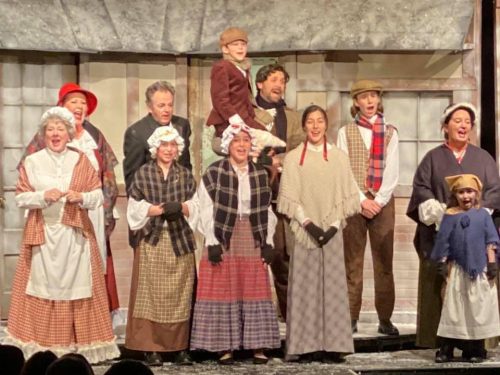 Ebenezer, the Cratchits, and ensemble. Photo from the collection of Joe Goode (Back row, center, holding Tiny Tim).

THE STARS OF THE PRODUCTION: THE CLEVER PLACEMENT OF MUSIC

Done in two acts, the play runs around 2 hours and 15 minutes with an intermission after the Spirit of Christmas Past scenes. While the stage is designed to facilitate scene transformations in under a minute, actors going through wardrobe changes require more time. Portrayed by Pendleton Brown, Ebenezer Scrooge is the driving protagonist, growing scene after scene. The character’s story requires a variety of costume changes switching from multilayered 1800s business suit to multilayered 1800s nightgown and cap. While the set might go from office to bedroom in an instant, buttoned and tied clothes require more time. To mask the work and maximize the use of the sets, Lisa Sherouse Riley strategically places musical numbers throughout the production. All era-appropriate hymns and carols, these moments allow the cast to be onstage (what the actors signed up for) singing while heightening the audience’s illusion that they are peeking in on a Christmas nearing 200 years gone by.

THE STARS OF THE PRODUCTION

Running just fifteen shows, the amount of polish and passion behind this production is staggering. But no matter how well-written or directed, no play can stand if its cast fails. Populated with local Atlanta talent trained in varied theatrical disciplines, this production showcases a range of dramatic styles from theatrical to method while boasting some angelic singing. The cast brings a level of facility and competence I would not suspect for a local production.

As mentioned, Pendleton Brown plays the central miser. A professional of the stage, his talents led to employment in New York and Hollywood. For Broadway, he performed in Soon with Richard Gere and Saint Joan with Lynn Redgrave. On television, his work appeared on Hill Street Blues, Knight Rider, Knots Landing, and more. Pendleton delivers a performance that highlights why he worked on Broadway. Balanced between moments of comedy, grief, joy, and revelation, his presence elevates the role to a level that many movies and major productions would envy. His craft is a joy to behold as his Ebenezer relives the character’s cardinal moments. During the Fezziwig dance scene, ten actors step into the aisle of the theater and promenade. Onstage, Ebenezer watches, begins moving to the rhythm, becomes caught up in the joy of the memory, and, by the end, “joins” the ghostly merriment clearly wishing to stay the night. As he dances, the years and the hardedge of Scrooge fall away leaving an old man who had forgotten the vibrance of his youth; all emotions intricately conveyed by Pendleton’s work.

However, this is not a one person show and the rest of the cast – 35 in total – deserve praise. The key rolls – Tiny Tim, Bob Cratchit, Fred, Jacob Marley, and the Spirits – are handled by an excellent cast of sure handed veterans and talented newcomers. Joe Goode’s Bob Cratchit is the earnest laborer you root for, the father figure whose heart is filled with dedication to duty, family, and Christmas cheer. Joe conveys Bob’s good nature, yet manages the humor of the scenes and the depth of Bob’s pain when his son passes. His real-life son plays Tiny Tim and is the definition of adorable as he rides dad’s shoulder and delivers his iconic line.

Sam North plays Scrooges’s nephew, Fred. It’s a character of levity and good cheer and Sam sells it with his terrific laugh. Throughout the play, he laughs and makes merry and it conveys Fred’s love of the season.

Each of the Spirits – Abby Shoemake’s Christmas Past, Gary Heffelfinger’s Christmas Present, and Matthew English’s Phantom – has an air of authority combined with a unique feel: The leader of Parliament to the host of the party to the ferryman, each takes their role in a specific direction that delineates each time period and focus.

Justin Collins plays Jacob Marley and deserves a special note for his dedication. The makeup and outfit he dons visualizes the weight and suffering of Marley. He appears early in the play, somewhere around the 30-minute mark. After the play, everyone comes out to see the audience as they leave. Like all of the Spirits, he’s still in his full makeup and has been for not quite two hours when the production ends. His personal dedication to being there for handshakes and fan photos in full attire is worthy of applause. 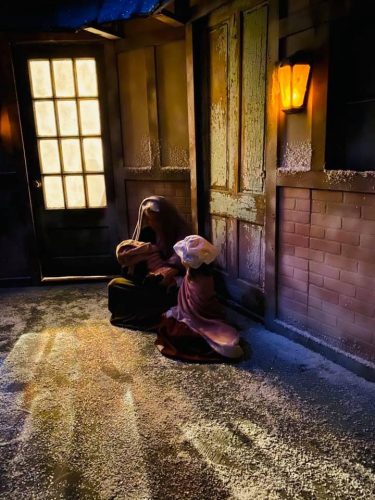 Photo from the collection of Joe Goode.

THE STARS OF THE PRODUCTION: THE SCENES

While every scene and actor captivate with their performances, there are a few scenes that stand out for the strength of their moments. 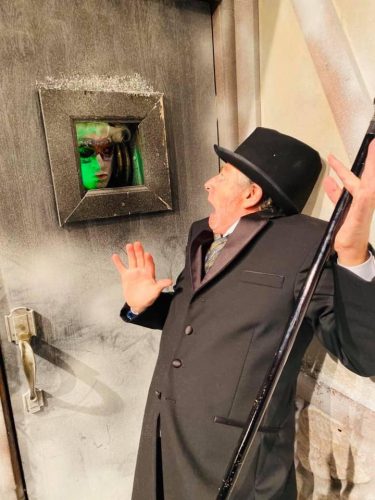 Photo from the collection of Joe Goode.

THE STARS OF THE PRODUCTION: THE DIRECTOR

I’ve spoken of the high level of competence demonstrated in this play and so much of that is owed to the director and co-author, Lisa Sherouse Riley. Her work shows a deft hand as every scene comes together. Local plays have tiny budgets, limited casting options, and no time to rehearse, yet Lisa’s work shows a degree of expertise that you’d never realize any of those challenges were a factor. Without her, this production would have been a humbug.

In her letter in the playbill, she summarizes what this story means to her:

“When growing up Christmas was always a time for families and friends coming together, being remembered and appreciated. Christmas has always been special to me as the years have gone by I have found that A Christmas Carol, whether watching the movie or seeing it on stage, brought back the magic and joy of Christmas that sometimes seems to have gotten lost in the hustle and bustle of everyday life.”

I’ve seen the play twice and plan to attend again in 2020. I can think of no higher praise than it was worth every cent, the time invested, and the time taken to write this review. 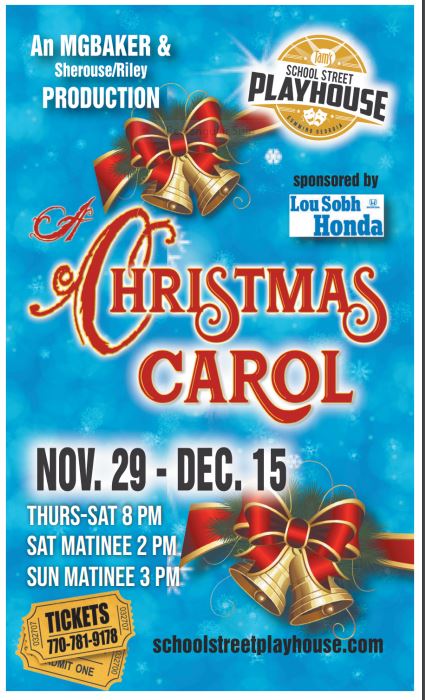 The production gave special thanks to Tuxedo WearHouse. The play is sponsored by Lou Sobh Honda. Follow Tam’s School Street Playhouse on Facebook here, read a brief mention in the Forsyth County News here, Joe Goode’s montage of images from the play (above) can be found here, and you can purchase tickets for this and upcoming performances here.