A little something happened on the way to the Convention

This week’s blog was going to be a convention report on Anachrocon, the steampunk con I went to over the weekend. The same con where I was to sit in as a speaker on my first panels ever. I could talk about how the panels went (really well, I actually got invited to sit in on another one, but had to decline due to day job commitments). Or talk about the people I met and talked to. Or even about the other guys and gals on the panels I sat in on. 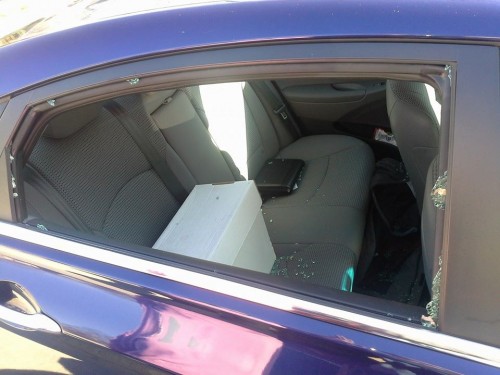 Apparently a book bag sitting in the back seat is too much of an inviting target for some people… though they left the comic box also sitting back there. I was annoyed, mostly because I felt put out because my day at the con was now over. Suddenly I get to deal with some real world problems as opposed to trying to have conversations with people. However, what they got was a couple of comics, a Square card reader, some pens for signing comics, and some laptop power cords (though the laptop was not inside the book bag). As I thought about it more it seemed that the bag probably was worth more than anything within it.

Today it occurred to me that there was one other item in the bag which I had forgotten about. There would be no reason to contact the officer to add this thing to the police report, but it is priceless to me.

I had placed my notebook in the bag before I left the house.

My notebook that I use to jot down any number of wild and crazy ideas. The notebook that houses many a random line of dialogue that I might overhear as I got about my life. When inspiration strikes, it gets written down in that notebook.

And it is gone.

On Sunday, while I was talking on one of the panels, a question arose from the crowd asking about ideas and what you do with them, how do you ensure that you don’t forget that random idea at either 3 in the morning or 1 in the afternoon. I talked about writing it on scratch paper and then compiling all of them at the end of the week. 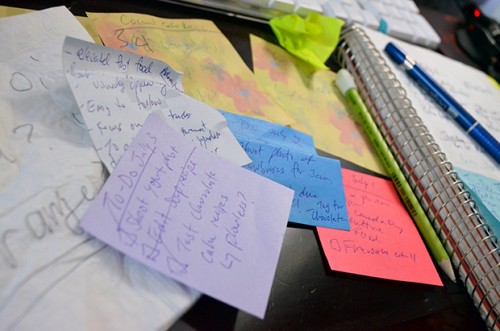 This is a what my wife has to deal with taking over the desk every week.

But I also mentioned the notebook. I never know when a moment of inspiration might strike me. Half the time I hear some scenario on the radio and I take it one step further and suddenly an idea appears. And I have to write them down. Far too many of those moments get lost in the Ether way too much during the course of a day. And while I didn’t have the notebook with me at all times, it traveled with me just enough to get some decent stuff.

Luckily I tend to be one of those people who constantly hits the save button, and the best way to do this with those scraps of paper is to put it into the notebook or type it into the computer. So probably about 1/2 of the notebook exists on my computer in half-finished ideas.

But there are still some of them that are now lost forever.

Now I’m saying that any of them are Steven King/ JK Rowling ideas which will cause me to start a book empire, but there are things in there that my brain came up with… no one else could have invented those words in just that way. And you/me/whomever never knows exactly what might or might not work. Maybe some of them need a little more seasoning.

But they are mine, and now… 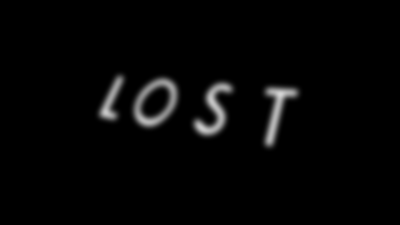 Not this type of Lost.

I wish I had some kind of nice ribbon to put on top of this story, and maybe one day someone will return it to me (I believe it has my address/email/phone number inside it). I’m not holding my breath exactly, but I will hope a little bit for that day where I’ll hold it in my hands like I’m Indiana Jones just before the Rock Trap is triggered. My fingers will tingle and I’ll be able to, for a moment at least, travel backwards in time to see what a younger version of me wrote down.

Hey, a guy can dream.

Writer of comics and novels. In 2006 his first short story "The God That Failed" was published by Terminus Media in their debut comic Evolution Book 1. Since that time he has had stories published in Terminus Media's Evolution Book 2 and Evolution Special, Kenzer and Company's The Knights of the Dinner Table, and Four J Publishing's The Burner #3. Currently he is eagerly awaiting the digital publishing of his first creator-owned comic The Gilded Age #1 to be published online as well as his first novel The Dark That Follows later this year.
View all posts by John McGuire →
Tagged  conventions, The Dark That Follows, writing.
Bookmark the permalink.