Hello! I know it’s been a while, but I’m back with a new monthly blog series called Con Life. No, I’m not talking about the art of swindling people. Each month I’ll be sharing the in’s and out’s of being a convention artist. I personally characterize a convention artist as someone who has more than five conventions on their calendar for the year. Conventions are a big commitment and sometimes a big investment too. They are hard work, but if you love them like I do, they are worth the effort! For that matter, anything worth your time and passion will be a challenge and involve hard work, determination, and persistence. Before I begin diving into all of that, here’s a look back at where my journey began. 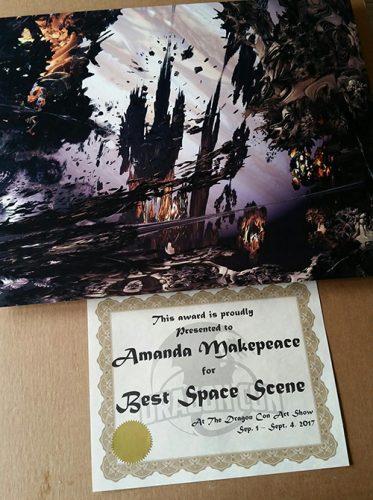 This year will mark 5 years since I began my journey as a convention artist. When I think back, I’m still amazed I was accepted into the DragonCon 2014 Art Show. Since then it’s been like a cascade of dominoes. I followed that with JordanCon in 2015, where I won Judge’s Choice in the Art Show. By 2017, I was hooked on attending conventions as a Professional Artist. That was also the year I won my first award at DragonCon for Best Space Scene. This year I won 3 awards, including Best Space Scene again, and I attended 7 events (plus mail-in to one convention). I’ve branched out to conventions in Tennessee and even one in Pennsylvania.

I have six shows confirmed on my calendar, plus one mail-in convention. There are a couple shows I won’t know about till later, so these numbers could go up. Regardless, it’s going to be a busy year! You can keep track of my convention schedule via my website’s Event Calendar. I’ll be updating it throughout the year.

Right now, I’m preparing for ChattaCon in Chattanooga, TN,  January 25-27. What does that entail?

I’ll share some tidbits from the convention, and any new convention news, in my next post in late January.

Amanda Makepeace is an award winning illustrator inspired by nature, mythology, magical beings, and distant worlds. She is the co-founder of the Bird Whisperer Project, a monthly art challenge focused on spreading the the love of birds and art making for everyone. Her art has appeared in ENnie award-winning games and on the covers popular independant novels and anthologies. Her latest project is the cover art for the Long List Anthology Volume 4, a book featuring Hugo nominated stories. Amanda is a regular at Fantasy and SciFi conventions in the southeast, and an award winner at JordanCon, DragonCon, ChattaCon, and LibertyCon. http://www.amandamakepeace.com
View all posts by Amanda Makepeace →
Tagged  art, art show, ChattaCon, convention, DragonCon, fantasy artist, illustrator.
Bookmark the permalink.