For me, Facebook has become a great resource for finding great artistic talent, and Takeia Marie is one of my most favorite find’s. Takeia’s credits include work done with Food Network’s “Chopped” champion, Josetth “Josie” Gordon, CJ Fly of Pro Era, The American Physical Society as an animation consultant, while also contributing work as an editorial writer for The Hip Hop Speakeasy. Hailing from New York City, this gifted artist recently took time to speak with the Tessera Guild about her career, her process of creation, and how her home city influences her work. 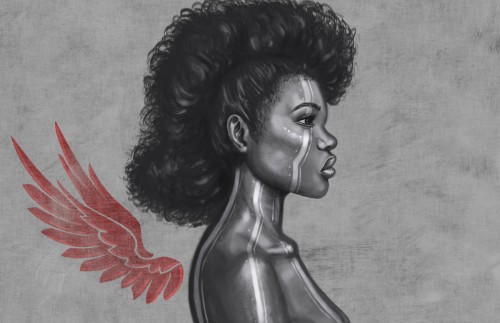 I am an illustrator from New York. I went to school for animation, but found myself more drawn to illustration, developing concepts and storytelling (mostly in comic books). I started teaching myself more about those things and the business behind illustration. I’m still learning more everyday.

The first thing I remember drawing seriously was Sonic The Hedgehog when I was younger. I was a huge Sonic fan from the first time I played the first Sonic game on the Sega Genesis back in the day. I had all the comics and loved the stories.

I always say I’m a hybrid of digital and traditional media when it comes to how I draw. It really depends on what I’m drawing and how I feel at the moment. But for the most part, I’ll use Photoshop or Manga Studio to lay out my work. Could be anything from a rough sketch to something more refined.

At that point, if I want something to be illustrated on paper or a client wants something tangible, I’ll print my rough and lightbox over it. Otherwise, I’ll digitally draw and color everything. If I’m doing graphic design work,

I’ll usually sketch out an idea on paper and then, using my sketch as a guide, create everything in Illustrator. At the end of the day, though, I don’t think any one tool, whether it be digital or traditional, is better than any other. It’s about the artist and how he or she chooses to use it.

Are there themes and/or subjects you find yourself drawn to again and again in your art? Are there any particular artists who inspired you to work in the comic book medium?

The first person who inspired me to draw comics was my cousin. He is an artist too, and is the person I credit with getting me into anime and the comic book medium. Before, I didn’t realize that it was possible to actually draw for a living. From there, I kept reading comic books, studying them, and getting how-to books to learn the depths of drawing comics.

As for themes – the thing is, I’m drawn to anything that has a good story and interesting characters. I get excited about drawing characters who are dynamic and stories with interesting and diverse worlds. For the most part, if  I can get excited about a story or the nature of the characters in it, it really doesn’t matter the genre or particular subject matter, so long as it sparks something that I can relate to.

You’re a native New Yorker. Do you find that your city informs your work in any way, or are there elements throughout your day that you find might creep its way into your work?

I find myself drawn to work that is very sketchy or gritty and energetic, as opposed to work that is super clean. I think that comes from the grittiness of New York, and the kinetic movement you’ll find in the graffiti that has just become a part of the iconic look of NYC. I enjoy drawing odd little things like buildings and streets or the cracks in a concrete sidewalk -anything that feels dirty or imperfect.  I’m also a huge Hip-Hop fan, and I find myself trying to integrate that raw, aggressive energy that you find in the music into some of my work. Growing up in New York has definitely had a big influence on me artistically. 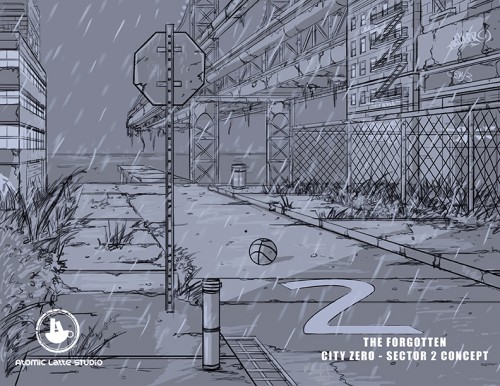 I’ve actually been trying to branch out from just staying in the comic book/illustration world (even though I still enjoy doing those things very much). Right now I’m working with iSojah, a Hip-Hop artist out of Columbus, Ohio, on some of the design portions of his Klasik Media imprint, which will be a go-to place for up and coming hip-hop artists and musicians, fashion designers, and entertainers who need help getting started. 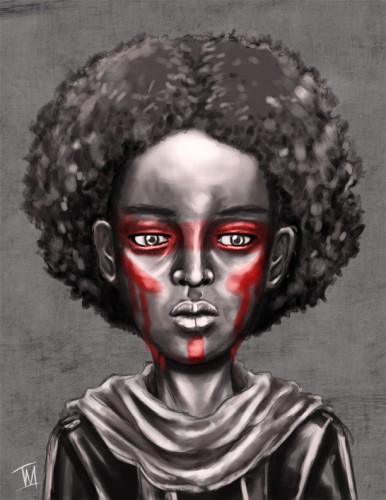 In between client work, I’m also working on my own project, The Forgotten. Something totally unrelated to art – I’m a contributing editorial writer for The Hip-Hop Speakeasy, a Hip-Hop blog that is dedicated to covering independent and slept-on Hip-Hop artists and bringing their music to the forefront.

People can view my work here:

Robert Jeffrey II is an award winning journalist whose work has appeared in such publications as UVC Magazine, JaDore Magazine, BlackSci-Fi.com, and The Atlanta Voice Newspaper. He is currently the Editor In Chief for BlackSci-Fi.com. He is a regular contributor for the Tessera Guild, and his comic book work includes client work for the Centers for Disease Control, and Nitto Tires. His comic book writing includes work on such award winning/ nominated series as his creator owned series Route 3, Radio Free Amerika, Terminus Team-Up, and Soul of Suw. He’s yet to fulfill his dream of pop-locking to save a community center. Head to his website at www.robertkjeffrey.com, and you can follow him on Twitter @SYNCHRKJ, Tumblr @robdawriter , and Instagram @robertk.jeffrey.
View all posts by Robert Jeffrey II →
Tagged  art, hip-hop, illustration, takeia marie, the forgotten.
Bookmark the permalink.