Greetings everyone. The following is an excerpt from the final draft of Dark Moon Daughter, Book II in the Tyrants of the Dead trilogy. The chapter this text appears in is named Dance with the Dead. It has long been of my favorites. 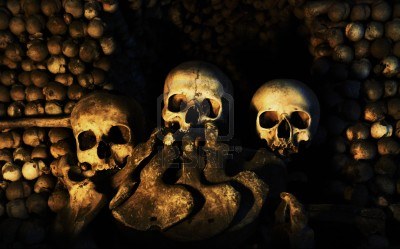 Andelusia awoke when night was at its deepest. The air was cool, the breezes gliding like ghosts over her skin, and the trees still and soundless. The moon, though nearly full, spilled precious little light into the forest, its glow barely bright enough to glaze the topmost limbs with a sorrowful, sallow light. She expected to be blind in the dark, but when she blinked away the last vestiges of sleep she found she could see as though it were early twilight beneath an open, cloudless sky. She did not ask her eyes to do as much. They just do, she thought. They work the way they were always supposed to.

She took a moment to gather herself, brushing the dirt and bone gristle from the front of her pants. Her terror was gone. Her heartbeat was steady and strong. She did not know it yet, but her hair, once the color of rubies and red wine, had turned blacker than pitch during her sleep, while her eyes were the blighted hue of spent charcoal. She was altered beyond her own understanding. I am more alive than ever, she knew. Though not by any natural means.

Her new power pounded through her veins and into her skull, a thousand shadows whispering in her mind. The feeling was fresh to her, too fresh, and at first she felt dizzy with it. When she tried to take a step away from the tree she had slept beneath, she staggered. When she looked to the moon, its light was as blinding as the sun.

After she gathered her feet beneath her and shook the moonlight from her eyes, she stood beside the tree, flexing her fingers and staring into her palms. What can I do with this power? She wondered. So many things.

She shut her eyes and let the night take hold. The world became a murky place, half real and half dream. All sound drained away. After a few breaths under, she opened her eyes and swished the flat of her hand like a dagger through the air. It worked as she knew it would. She felt her skin fade into shadow, rendering her invisible, her body becoming more ghost than woman. I can do this anytime I desire, she knew. If only I had known…

With a flick of her wrist, she snapped her palm above her head. When she did, the moonlight blazing on the nearby limbs vanished. The thickets around her fell into impenetrable darkness, a black darker than any ink, though she could still see through it. I can create night. She smiled. No more broiling beneath the sun. No more light creeping into my bedchamber. The world shall be as black as I dare to ask for.

And then she tried something else.

The idea slipped like a moonbeam into her mind. She cupped her hands as if to catch water from a fountain, and when she did a dark fume began to broil between her fingers. Hot enough to melt iron and burn bone into ash, the black flame smoldered and smoked, and yet she was unscathed. The ebon tongues of fire felt as mutable as clay in her grasp, and more dangerous than any substance in the world. It danced wildly on the tips of her fingers, threatening to leap into the trees until she closed her fist around it, snuffing it out.

When the black fire fled, she quaked and stared wide-eyed at her fingers. What was that? She felt stunned it had not slain her. The voices. I remember what they said. ‘The weapon,’ they whispered. One touch can kill a person. Much more can kill thousands.

She had no more time for experimentation, she knew. She did not understand why her magicks had chosen this moment to awaken, but it does not matter. This night has been long in coming. I have what I need to defeat the Uylen. I must find the Pages.

She left the ancient tree behind. She became one with the shadows. Like a slip of winter wind, she glided effortlessly between the trees, who dozed like the dead, heedless of her passing. She made no sound where she floated, no crunch of dry leaves or snap of sharp twigs, for she was only a passing shade, a blot of ink, a shiver in the night. She might as well have been a spirit, for no living creature heard her, not the crow whose tree she flew beneath, not the bats, not even the Uylen, several of whom she floated treacherously near to.

The darkness was her playground. She roamed an hour deep into the forest, then two, until she came to another clearing riddled with Uylen totems. Ten skulls hung from a thick strand of human sinew, their empty gazes falling upon her like a morbid audience. She was not afraid. She emerged from the shadows and walked right up to them, clicking several with her finger. Everyone in Thillria will look like this, she imagined, if the Uylen have their way.

And then she saw them, five Uylen dozing beside the blood-mottled trunk of a nearby tree. The creatures had a campsite, if it could be called as much. She glimpsed their filthy blankets spread across the wet the loam, a pile of dust-covered pillows, and three white jugs filled with a nameless liquid. The Uylen were skeletal, so emaciated that their flesh puckered between their ribs, which were countable even at a distance. Even as she tapped the last of the totem skulls, their eyes, as useless in their heads as river rocks, snapped open. They are aware of me. She froze. They can smell me.

The Uylen creaked and groaned and rose to their feet. The moonlight shined upon their faces, white on white, their skins livid as dead men. She knew she could escape any time she wanted, so she stayed right where she was. They sniffed the air and clicked their daggerlike nails. Watch this. A foolish thought came to her. Standing in the clearing’s heart, she teased them into coming closer with a snap of her fingers and a cluck of her tongue. Their knees popped and their jaws fell open. They came within ten paces, but then halted. They lost me, she laughed inside. They need me to make another noise.

She exhaled, and the Uylen moved three steps closer. My heart. They can hear it beating…