This is no longer the Darkest Timeline.

We finally got to see the damn sailboat.

I didn’t have faith earlier in the summer.

There have been years where I watched the Atlanta Braves throughout the course of a season and knew, just knew that the team was destined to go deep in the playoffs and end up in the World Series.

That wasn’t the case this year.

So many things seemed to go wrong. And being an Atlanta fan (and Miami Dolphins fan), I can recognize when one of my teams might be snake bit.

After the All-Star break, we literally went two weeks where we’d win a game and lose a game. It set a record.

Even as they started winning I thought, well, maybe we could make a run at the division. Maybe we’ll get to watch meaningful games in September. The way the season had gone to that point, that would have been magical.

And somehow we won the division. I thought, well, maybe we can win against the Brewers. Why not?

And the doubts began to creep in again. The ghosts of sportsball years past whispered their lies in my ear.

Then we were in the World Series. Somehow, someway. And I finally believed it could happen. 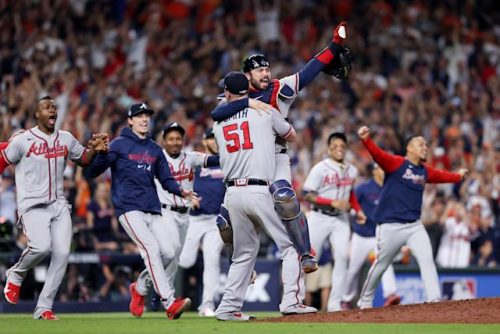 And last night, it happened.

It struck me weird. My wife was jumping up and down, but for me, it got a little dusty in our living room. I wrote about how even with the 1995 World Championship run, I wasn’t focused on the Braves as much as I had been the previous years or how I would be the following years. So even though I felt great about it happening, I didn’t really experience it. I didn’t live and breath and die with every pitch. My heart didn’t threaten to explode out of my chest when they had men on base.

I thought about how I’ve watched all these games this season. The crazy amount of enjoyment I’ve gotten from watching these grown men hit and throw a small ball. It’s silly. And Crazy.

Writer of comics and novels. In 2006 his first short story "The God That Failed" was published by Terminus Media in their debut comic Evolution Book 1. Since that time he has had stories published in Terminus Media's Evolution Book 2 and Evolution Special, Kenzer and Company's The Knights of the Dinner Table, and Four J Publishing's The Burner #3. Currently he is eagerly awaiting the digital publishing of his first creator-owned comic The Gilded Age #1 to be published online as well as his first novel The Dark That Follows later this year.
View all posts by John McGuire →
Tagged  Atlanta Braves, baseball, John McGuire, World Series.
Bookmark the permalink.