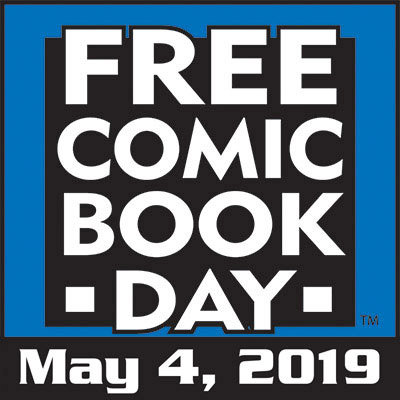 This past Saturday was Free Comic Book Day. Hopefully, you were able to get out of the house and snag a handful of the freebies your local comic stores were giving away.

A few things I realized for those people who aren’t aware of Free Comic Book Day – many people didn’t realize it was a nationwide event. More than one person responded over social media that they were bummed because they weren’t in the Atlanta area. After letting them know that their local comic store was probably participating, I’m hopeful some of them managed to get into a shop.

The other thing that I don’t think plenty of people realize is that just because Saturday is the day of the event, it doesn’t mean that it is the only day to potentially go and pick up free funny books. Plenty of shops order extra copies of some of the bigger books (the Marvel and DC probably leading the pack, but plenty of the more kid-focused ones as well). So even now that it is Wednesday (New Comic Book Day!), there is a decent chance they still have some of the Free books left over from the weekend. No reason that you can’t check it out (even a couple of days late).

As I posted last week, I was participating directly as one of the guests at Galactic Quest’s Buford, Georgia location. 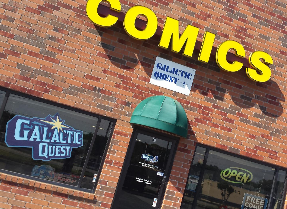 It was a great time. When I arrived to set up around 8:30 AM, there was a line probably 30 people deep waiting to get into the shop when it opened at 9:00 AM. Once the clock rolled over, there was a steady progression of people coming into the building for the next 30 minutes (no let up from the line until that point). Medieval Times had a couple in costume who gave out free passes to those first five people in the line. While there were a handful of comic creators (yours truly included), Galactic Quest also has a gaming area where they had people ready to teach customers about the Final Fantasy Card Game. Next door, there was a live band playing.

The best part of the day is seeing the people who cosplay. I saw a Scarlet Witch and Winter Soldier. A mom and daughter dressed as Little Red Riding Hood and the Big (well, small) Bad Wolf. A little boy in a Miles Morales Spiderman costume along with his friend who was dressed in a Captain Marvel outfit.

For me, the day was a good one, although I must admit that I made a small(ish) mistake. Silly me thought that given it was Free Comic Book Day, that I should have plenty Gilded Age Graphic Novels ready to go. And while I did sell a few, what actually got the most looks were my two novels (The Dark That Follows and Hollow Empire). I only brought 2 copies of The Dark That Follows and they were gone by noon, while I had 5 copies of Hollow Empire to start (and ended with 1 copy left). I actually had to text Courtney to say “hey, if you are still coming by the shop, make sure to grab some copies of both books!” I probably only missed one potential sale by not having more copies with me (my fault, I thought there were more in my bag and didn’t verify). 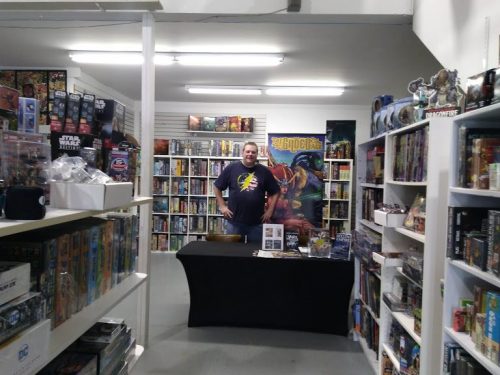 A good problem to have.

The other item I currently have on the table is the Gilded Age Coloring Book. It was one of the stretch goals from the Kickstarter and normally gets the response of “Wow, what a cool idea.” from people who notice it (not that they all buy it or anything, but it is a way to continue the conversation some times). I’m actually down to about two dozen copies and am now wondering if maybe I should invest in some new images for a Volume II…

Anyway, it was a great time and a great Saturday. And I even managed to snag a few comics for myself! Thanks again Galatic Quest!

Writer of comics and novels. In 2006 his first short story "The God That Failed" was published by Terminus Media in their debut comic Evolution Book 1. Since that time he has had stories published in Terminus Media's Evolution Book 2 and Evolution Special, Kenzer and Company's The Knights of the Dinner Table, and Four J Publishing's The Burner #3. Currently he is eagerly awaiting the digital publishing of his first creator-owned comic The Gilded Age #1 to be published online as well as his first novel The Dark That Follows later this year.
View all posts by John McGuire →
Tagged  cosplay, Free Comic Book Day, Gilded Age, Hollow Empire, John McGuire, The Dark That Follows.
Bookmark the permalink.