A few years ago (maybe 2006, 2007) my mom’s side of the family, the mostly Chicago based Stephenson clan, decided to hold a family reunion in Monticello, Indiana. Monticello has great vacation spots/ campsites in the area, including a hallmark of Midwest fun times, Indiana Beach, a local amusement park/ waterpark.

Now if you could ignore the various “Anti-Meth dealing” warning signs we saw on various back roads, this place is one to visit. 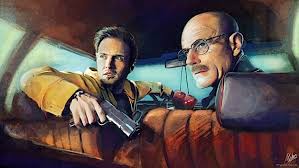 In the surrounding area you’ll find picturesque woodlands, replete with nice lakes, small towns, and great places to just barbeque, and while away the day. We were able to snatch up a set of cabins for the entire family, and spent a five day vacation just catching up and having fun.

Our folks had come from all over to commiserate: Atlanta, Sacramento, San Francisco, Jackson (MS), Los Angeles, Chicago.

Heck, there was some family I hadn’t seen since the second Rodney King trial verdict.

Basically, it’d been a while since I’d seen half of these people.

So being Atlanta based my brother (Brandon) and I decided to forgo the sensible option of getting plane tickets to Chicago, and catching a ride with the family to Monticello which was just a few hours away.

Nope, being the guys that we were (and wanting to have some wheels while on vacation), we’d come up with a decision to load up in my 2001 Nissan Altima, and take the 9-10 hour drive to the reunion. Added to this, with the work schedule that I had at the time, we had two options on when to leave: exactly after I got off of work, which would have been around 9 or 11 pm, or wait until the next day. 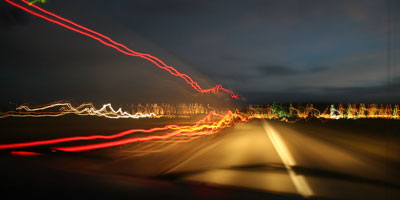 Road tripping how it should be done. At least for insomniac’s.

Needless to say, we decided to tap into our inner insomniac and hit the road, caffeine/ Red Bulled up to the gills.

For me night driving is fun, and a bit relaxing. I enjoy being able to see the world when it’s basically asleep, and just catch the sights as most folks are winding down for the day. Our nocturne route took us through Georgia, Tennessee, Illinois, and then Indiana.

Alternating between blasting OutKast, Kanye West, Esperanza Spalding, and Red Hot Chili Peppers, my brother and I took turns with the driving duties.

It was when we hit mid Illinois that things got interesting.

At the time, I was driving, rolling through moon drenched rows upon rows of corn.

Though I’d gotten use to this from previous road trips to Chicago, to say that endless rows of flat farmland can lull you into a chillastic state is an understatement.

So guess what I had to break me from this stupor?

Police lights ahead of us. A lot of them. Blocking the whole two-lane interstate.

You would’ve thought that damn Dr. Richard Kimble was on the loose with all the lights that I saw. 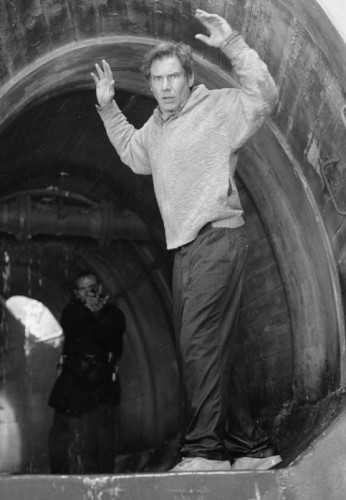 No caption needed. This scene was just all sorts of awesome.

First thought I had: Damn.

Second thought I had: Damn, damn.

Third thought I had: Our current situation playing out like the one from “The Five Heartbeats” when the cops pull the main characters over on a lonely country road

Check the movie out and you’ll catch my drift.

So I wake my brother up, who’s a much cooler dude than I am. He tells me to just chill, and we hit the roadblock.

I rolled down the window and the officer asks for my license and registration. As I’m handing it over I decide to ask why the whole freeway is closed down at the latest hour known to man.

The cop hands back my information and doesn’t give a reason. At all. Just hands it back. Then asks where we’re headed. 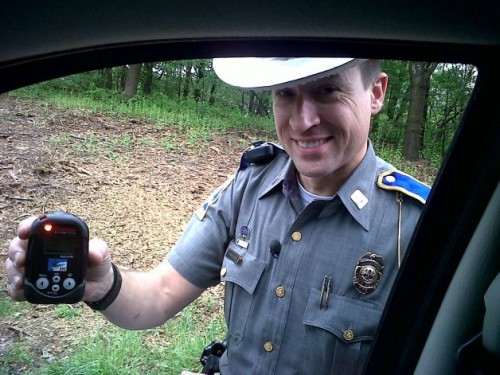 I told him Monticello, and then ask is there an alternate route we can take to get back on the highway we were on.

The cop mumbles something about taking a nearby exit, follows up with something else unintelligible, and then backs away ready to direct the next car in line.

So as I prepared to barrage the officer with more questions, my brother, sensing that this dude wasn’t going to be too forthcoming, instructs me to keep rolling.

So we follow the officer’s “directions”, and all we see are rows of corn.

We drive in another direction, and see rows of corn.

No indication of how to get back on the freeway. None at all.

So this goes on for maybe, 30, 35 minutes max. As far as gas, we’re doing alright, but not spectacular.

I started imagining thoughts of my mom getting a call from the Illinois State Patrol:

ISP: Ma’am, we’re sorry to have to inform you that, well…., ma’am, your son’s got lost and gorged themselves to death on corn.

ISP: The truly tragic thing about it miss, is, well…. there was a McDonald’s not but a step or two around the corner from where their bodies were found.

So as we’re driving my brother points into the distance.

I look in the direction he’s pointing and see a convoy of taillights. A semi-truck convoy.

“Who would you figure might have the best idea on how to get back to the interstate?” Brandon asked.

I figured, heck, we’re not having any success so why not follow them? 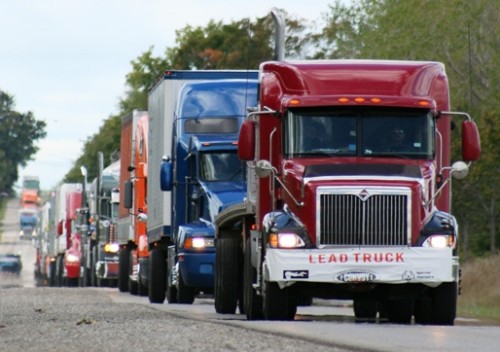 Relying on faith, and the sound judgment of Brandon, we struck pay dirt. Following the truckers lead we rolled through a small town, sleeping neighborhoods, took a bunch of side roads, and within a bit of time, we were back on the freeway.

After hitting the interstate, we were good to go. Heck we even got to the vacation spot before anyone else in the family.

One thing I learned from that situation and in countless one’s before and since, is it’s sometimes good to follow the lead of others. Not those folks who don’t have your best interest at heart, but those who care enough about you to set you on the right path.

On the nerdy/creative front it’s happened a number of times. 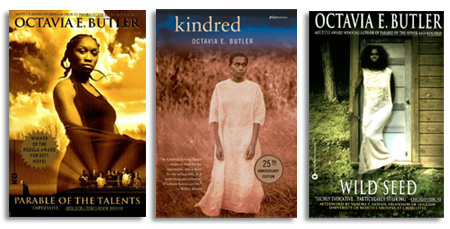 Some of Ms. Butler’s most celebrated sci-fi works.

My Dad introduces me to the awesome work of Octavia Butler, a talented sci-fi novelist to whom I now look for inspiration on the writing front.

One of my closest friends Oscar gives me a copy of Alan Moore’s seminal work, Watchmen, and this writer’s mind is blown. An awesome friend, Patrick, loans me his entire of collection of Preacher to read, and I devour the books in the span of a weekend. 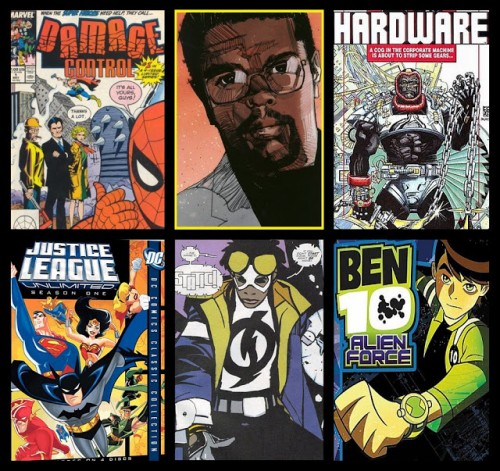 A man of many talents.

One Saturday afternoon I get a package from my Dad in Atlanta, and was introduced to the mind-blowing universe of Milestone Media, and another writing inspiration, Dwayne McDuffie.

My mom picks up a copy of “The Amazing Spiderman” from the drugstore (remember those days folks?), and my world is forever rocked by the exploits of a certain web slinger who often had problems paying the rent on time.

I meet up with the folks of Terminus Media, who teach me the ins and outs of writing/ creating comics, and I’m now a published comic book writer. 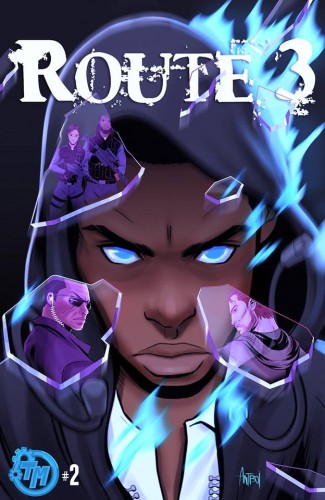 A little comic I created.

Through the instruction, and direction of my editor/ brother from another mother, Dennis, I got a firsthand instruction on what it took to be a successful freelance journalist.

Heck, the often maligned Wizard Magazine got me pushed in the right direction of another writing inspiration, Greg Rucka. 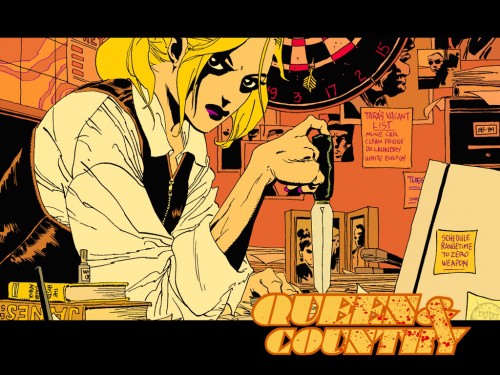 So if you get the gumption, take a chance, and follow the direction of those folks willing to offer a helping or a guiding hand. Makes things fun, heck even easy in some cases.

I’m still doing it, and think I’m all the better for it.

If you don’t you might find yourself stuck in endless rows of corn.

Robert Jeffrey II is an award winning journalist whose work has appeared in such publications as UVC Magazine, JaDore Magazine, BlackSci-Fi.com, and The Atlanta Voice Newspaper. He is currently the Editor In Chief for BlackSci-Fi.com. He is a regular contributor for the Tessera Guild, and his comic book work includes client work for the Centers for Disease Control, and Nitto Tires. His comic book writing includes work on such award winning/ nominated series as his creator owned series Route 3, Radio Free Amerika, Terminus Team-Up, and Soul of Suw. He’s yet to fulfill his dream of pop-locking to save a community center. Head to his website at www.robertkjeffrey.com, and you can follow him on Twitter @SYNCHRKJ, Tumblr @robdawriter , and Instagram @robertk.jeffrey.
View all posts by Robert Jeffrey II →
Tagged  Breaking Bad, Comics, Direction, Dwayne McDuffie, Freelance, Indiana Beach, Meth, Octavia Butler, Sci-Fi, Terminus Media, The Fugitive, writing.
Bookmark the permalink.