Just Another Day in Purgatory

The following is a guest spot from Tessera Guild favorite, River Fairchild. She’s got an awesome new release, Just Another Day in Purgatory, and it’s available. Right. Now. 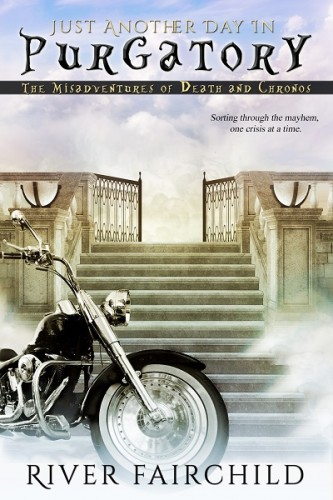 Hi. Death here. I’d introduce you to Chronos as well, but he’s stuck in the ‘80s and doesn’t understand social media.

I’m pleased to announce the release of our new novella, Just Another Day in Purgatory.

What’s it about, beyond the wacky fun and crazy misadventures of myself and my best bud, Chronos, as we keep the universe from imploding? It’s about friendship in the midst of insanity. Trying to find order in the middle of chaos. Living life on the edge and having fun while doing so. It’s about having someone’s back, no matter what.

Come have fun with us as we sort through the mayhem, one crisis at a time. Maybe I’ll even give you a ride on my Harley.

In Just Another Day in Purgatory:

Hell freezes over. Heaven heats up. A resort springs to life on the banks of the River Styx and souls don’t want to move on.

Nothing scares our intrepid immortals—except a run-in with a scissor-wielding Fate after messing up the Great Tapestry. She’s the only one capable of cutting their Life Threads.

It’s just another day in Purgatory for Death and Chronos as they sort through the mayhem and keep the universe from spinning out of control. Be sure to bring along your helmet. You never know when Death might offer you a ride on his Harley.

Step into their world. The afterlife will never be the same.

River Fairchild is somewhat odd, brandishes a dry sense of humor, owned by several cats. Lives in a fantasy world. A fabricator of magic. Makes stuff up and spins tales about it. Believes in Faerie crossings and never staying in one place for very long. Speculative Fiction wordsmith. The secret to her stories? Spread lies, blend in truths, add a pinch of snark and a dash of tears. Escape into her world. She left the porch light on so you can find your way down the rabbit hole.