Sometimes when I get notifications in my email that other people I follow on Kickstarter. They populate my inbox to the point that I can’t always keep up with all of them. But, with some diligence I do my best to at least look at the various projects and see if they interest me in any way. It can be a title or an image or even the cost which grabs my attention and forces me to read further. Regardless, I never know what is in store for me with such a scattershot approach to potentially finding these new indie comics.

Burlap did something though. It kinda stuck in my brain. Not at the forefront, but just at the edges of my mind. That thought of a slasher killer being the potential hero of the story. It’s enough to plant that seed in my mind, telling me to check it out. 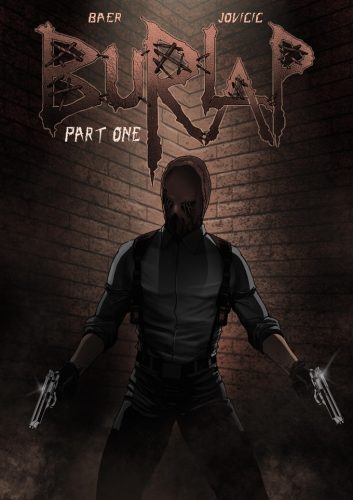 The idea was to take the slasher formula we all know and love and flip it on it’s head. This go around, instead of a silent, masked killer stalking and executing stoned teenagers or long lost siblings our slasher killer is the hero! And our doomed victims are the series villains!

It is fall of 1995 in a small town in New Jersey, where a vicious gang of serial killers, led by the charismatic psychopath Cottontail, are spreading madness and bloodshed. But something happens Cottontail did not intend when he comes face to face with BURLAP, a silent, masked killer with a mission of his own; destroy Cottontail and all of his followers. As the mayhem ensues Cottontail comes to realize this is no random vigilante, but a ghost from the past who will stop at nothing to make Cottontail and his lunatics pay for what they did to him. So begins a twisted tale of murder, revenge ghosts, gypsy curses, forbidden romance…and a homicidal Easter Bunny.

A black and white horror comic that focuses on a slasher trying to get revenge on the maniacs (in masks) who did him wrong. That was enough to color me intrigued. Taking a look at the artwork, there is an unsettling feeling as you see these psychos go about terrorizing a mother and son. The idea that one of them is dressed as a clown who both terrifies and also, somehow, is there to try and help cheer the kid up, tweaks the brain a little bit.

And I think that’s what I’m expecting from the comic – something that is going to tweak my brain over the course of the four issues. 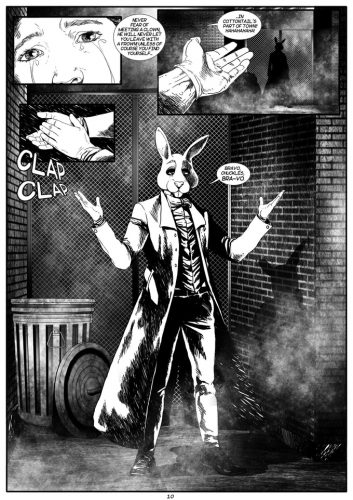 To get the full series will cost you $5 (digital) or $20 (print). As you move up the tiers there are opportunities to get some very unique things. At $125 you get a Custom Made Burlap Mask Bust with Stand. Nothing like having your own slasher movie mask on your shelf! And, it wouldn’t be a horror comic without an opportunity to have a role where you get killed. At $150, you get to have a personal commission where your comic version gets killed!

They have passed their overall goal, which is no guarantee in these times we find ourselves living in. As of this post, there are eight days left for them to run the score up… so to speak. Mostly, I’d say if horror comics are in your wheelhouse, then you may want to check this one out. I know I’m looking forward to reading it. 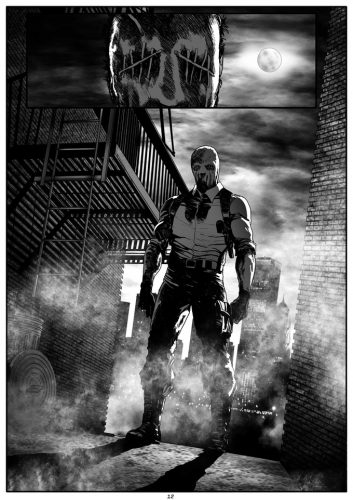 Writer of comics and novels. In 2006 his first short story "The God That Failed" was published by Terminus Media in their debut comic Evolution Book 1. Since that time he has had stories published in Terminus Media's Evolution Book 2 and Evolution Special, Kenzer and Company's The Knights of the Dinner Table, and Four J Publishing's The Burner #3. Currently he is eagerly awaiting the digital publishing of his first creator-owned comic The Gilded Age #1 to be published online as well as his first novel The Dark That Follows later this year.
View all posts by John McGuire →
Tagged  Burlap, Jesse James Baer, John McGuire, Kickstart the Comic, Zoran Jovicic.
Bookmark the permalink.