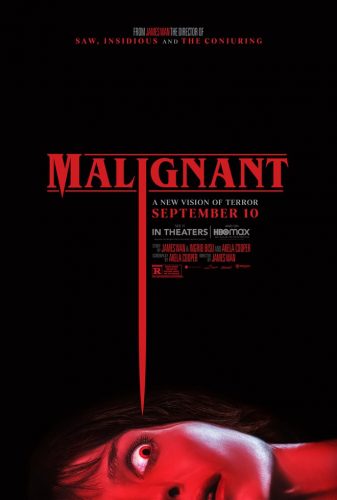 I always tell myself that this is the year I watch a TON of horror movies during the month of October. Yet, sadly, the month begins to dissolve away and before I know it the scary decorations are being put away and Christmas Season comes out in full force. However, this year, HBOMax released the movie Malignant allowing me to get a couple of weeks jump on the Halloween festivities.

Malignant is the story of a woman (Madison Mitchell) who after an altercation with her boyfriend who nearly kills her, finds herself followed by this demon/creature/person/thing. At first the creature seems to want to terrorize her specifically, but as the movie progresses, we see that it appears to have a different sort of agenda. Soon enough others are killed by the entity, with their only connection being our heroine. Even as the police arrest her, the entity continues to taunt them, until we get our final confrontation between the lead and the killer.

Some of the special effects are really amazing. There is a connection between Madison and the Killer so that she sees his kills. As the hunt begins, her world melts away revealing the house or room where the next victim is. The first time it happens I definitely let out a “wow”.

There is a pair of sequences where the Killer interacts with the police, the first time evading a lone cop by doing a crazy amount of parkour-style moves. The second is the battle at the police station, which I almost would say would be worth checking out even if you didn’t watch the rest of the movie. Aside from a couple of weird shots (which actually could be explained by the reveal of who/what the killer is), it gives a very creepy feel to how the thing moves in almost counter in style to what we would expect. The action is all over the place (in a good way), and it manages to get into the more gore side of the horror.

My very first thought after finishing the movie was to wonder whether there was a classification of movies between an “A” and a “B” movie. There are times during the film where everyone is taking the script very seriously, and it mostly works. And then there are the times where the dialogue (and the delivery) makes me wonder if Ed Wood had a hand in crafting it. This makes it feel a bit disjointed like they didn’t know which way to go, trying to do a little of both and not mastering either.

The Killer… he was definitely ugly but not as scary as I was hoping for. Sadly, I figured out what the twist was going to be fairly early in the process which makes me wonder if it was too telegraphed for the audience or not. When the “twist reveal” occurs, instead of being a WTF moment, it was more of a “OK, that’s what I’d thought”. This doesn’t make it specifically a bad or good thing, but I think speaks to the idea of trying to play something a little too coy throughout the movie.

Overall, this is very much a popcorn and candy movie. It doesn’t ask much from the audience and tries its best to be a bit of a throwback to the horror/thriller films of the 80s. It does a good job with the spectacle but the rest fell a little flat for me.

Writer of comics and novels. In 2006 his first short story "The God That Failed" was published by Terminus Media in their debut comic Evolution Book 1. Since that time he has had stories published in Terminus Media's Evolution Book 2 and Evolution Special, Kenzer and Company's The Knights of the Dinner Table, and Four J Publishing's The Burner #3. Currently he is eagerly awaiting the digital publishing of his first creator-owned comic The Gilded Age #1 to be published online as well as his first novel The Dark That Follows later this year.
View all posts by John McGuire →
Tagged  halloween, Horror, John McGuire, Malignant.
Bookmark the permalink.