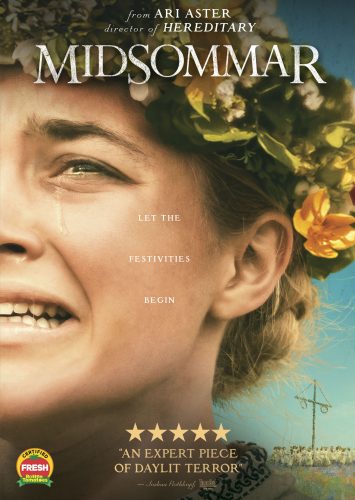 With a movie like Midsommar, I come at it from two different directions based on what little I knew about it. It’s a movie about a group of travelers (friends) who are given front row seats to experience a 9-day festival in a backwoods part of Sweden. Now, with stories like this, we all know that things are never going to be what they appear to be (otherwise it wouldn’t be a horror movie). So the questions we must ask ourselves are twofold:

Is the lead-up to the big reveal of what might really be going on enjoyable?

Is the reveal worth it?

It’s all about execution in these situations, because if you don’t spend enough time in the build-up where we start to get acquainted with our characters, then when bad things happen to them, we just won’t care. However, if the movie takes too long to start showing the weird, then it is very likely to lose our interest before we actually get there.

We begin the movie seeing Dani and Christian going through the motions of being in a relationship. Well, it’s Christian who is going through the motions as he has become clearly disengaged with Dani using him as an emotional support person more than a boyfriend. All this comes to a head when Dani finds out her sister has killed herself and taken their parents with her. This tragedy has forced Christian to remain with her whether he really wants to or not.

Weeks? Months? later, Dani discovers Christian and his three friends are going to Sweden for the midsommar festival Pelle’s home commune throws every year. After being invited to go on the trip with the guys, they arrive and we can begin to see that Dani is not only still struggling with PTSD from her family’s deaths, she can’t even rely on Christian as much (as he’s mentally checked out). The festival begins and while there are some odd eccentricities, overall things aren’t too out of the ordinary.

And then things begin to go sideways when they see two of the elders commit suicide.

I’m not going to go any further with spoiling the movie, but I wanted to mention this key moment because none of our characters, save for Dani, have any kind of realistic reaction to what’s happening in front of them. And maybe it falls into the old troupe of not leaving the haunted house immediately, but both Christian and Josh nearly act like what they’ve seen is as normal as anything else (and what they saw was NOT normal). In fact, it is only Dani, who already has visions of horror in her head, who nearly breaks completely upon seeing the display. And for some reason, it’s only a pair of other travelers who decide they’ve had enough, not our group.

From there, things only get weirder and weirder.

Florence Pugh delivers a great performance and definitely has the most realistic reactions to nearly everything.

The set-up, while potentially dragging things out a little bit too much, does a great job in making sure you understand that while the festival might be odd, it’s still not crazy (until suddenly it is).

The reactions of the other characters to strange things occurring. The elder’s deaths aside, at a certain point people, start disappearing and no one seems to care… at all. Like not even a raised eyebrow.

I get that you need the characters to stay, but I wish they’d found a more plausible thing other than “I’m writing my thesis on this.” Bleh.

It’s not really scary. I had a little bit of dread here and there, but only because I was hoping for something big and bad to happen. We have one kill completely off-screen, which felt like a missed opportunity because as the audience, we knew that character was dead the moment he went “missing”. It’s like the film wants to play coy when everyone knows the punchline anyway, so why hide things?

Another one that could have been trimmed a little bit (probably 15 minutes easily) (I’ve heard there is a 3-hour version and can’t imagine what that would do that the 2+ hour version didn’t already convey). The ending was just… I get what happened, but I’m not sure I “get” it

I’ll take another shot this weekend. Maybe I can find the one then?

Writer of comics and novels. In 2006 his first short story "The God That Failed" was published by Terminus Media in their debut comic Evolution Book 1. Since that time he has had stories published in Terminus Media's Evolution Book 2 and Evolution Special, Kenzer and Company's The Knights of the Dinner Table, and Four J Publishing's The Burner #3. Currently he is eagerly awaiting the digital publishing of his first creator-owned comic The Gilded Age #1 to be published online as well as his first novel The Dark That Follows later this year.
View all posts by John McGuire →
Tagged  John McGuire, Midsommar.
Bookmark the permalink.