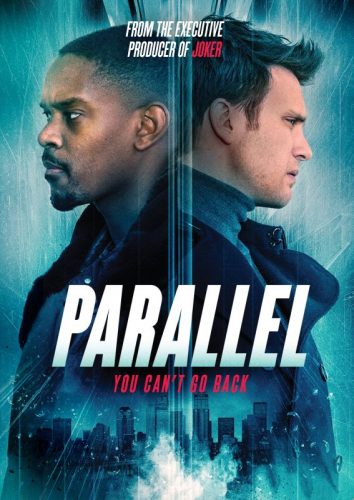 The idea of other versions of ourselves… those who might have made very similar choices to the ones we have made so that their reality and ours aren’t that much different. If that were the case, and you found a way to reach across the veil of our reality into theirs, what could you do with that ability?

That’s the fundamental question at the heart of Parallel.

A group of four post-college adults who are struggling to make their business (app development) a success, find that there is a secret attic space in the house they are renting. More curious than the secret room is that it houses a mirror which when passed through, can lead the traveler to a world nearly their own, with subtle differences to be sure. However, the more important aspect of this parallel world is that time moves much much slower there. Hours can go by in the alternate world while mere minutes pass on our own. Armed with this knowledge, the group of friends begins to use this “extra time” to their benefit allowing them to finish projects in days when it should have been weeks. When they later discover that even though the world at large is pretty similar to their own (down to their own doppelgangers), they find that artistic choices aren’t always the same.

And with those minor differences, they recognize an opportunity to effectively plagiarise these alternate worlds for their developments in technology to increase their own stature in our world.

Opportunity becomes a chance at excess, and the movie begins to change. As these types of stories often do, the darker side of having this power begins to fracture the group to the point that they are no longer sure they can trust the others.

To say more would be to give away some of the middle and last acts twists and turns, but the thing about most movies about the parallel worlds (or tv shows for that matter) is that they normally go for the bigger changes to the timeline. It’s not enough to have a world that is virtually the same, minus some historical footnotes, those films would have us in a world were Rome never feel, or Germany won WWII, etc. This movie focuses more on the characters’ reactions to this newfound power. Really leaning into the whole “power corrupts and absolute power corrupts absolutely” theme.

What makes this interesting is the idea of these nearly identical doppelgangers from the other realities. While our group uses their mirror to ensure their own successes, very little is given to those versions of themselves they are potentially screwing over by: committing crimes, spending their money, and even living out their own fantasies with others. It’s a movie where the mirror is merely a way to tell a story about how easy it is to lose your own identity. As the movie progresses towards its ending, the characters no longer resemble themselves from the start of the movie, making us ask the question of whether or not they’ve effectively become their own doppelganger.

It’s those character moments which will drive the movie once you strip some of the sci-fi aspects of things from the story. What happens when a group of friends discover something to make them rich? How long does it take for that money and power to drive a wedge between them? And at the end of the day, are they even the same people they were at the start. Parallel takes all of that and then adds that bit of science fiction to tell that story while showing us that the grass isn’t always greener.

One other thing, the poster at the top of this blog makes me think more along the lines of a spy vs. spy movie than something to do with parallel worlds. Just an odd thought.

I enjoyed the movie, but then again alternate worlds and living different lives is right in my wheelhouse. In fact, I wrote a book that is definitely in that same vein where a man has to figure out what his own personal reality actually is as he experiences worlds very close to our own, but not his original one.

It’s called The Echo Effect and you can get it here.

Writer of comics and novels. In 2006 his first short story "The God That Failed" was published by Terminus Media in their debut comic Evolution Book 1. Since that time he has had stories published in Terminus Media's Evolution Book 2 and Evolution Special, Kenzer and Company's The Knights of the Dinner Table, and Four J Publishing's The Burner #3. Currently he is eagerly awaiting the digital publishing of his first creator-owned comic The Gilded Age #1 to be published online as well as his first novel The Dark That Follows later this year.
View all posts by John McGuire →
Tagged  John McGuire, Movie review, parallel, Parallel Worlds.
Bookmark the permalink.