My Daily Struggle With Not Giving a F**k

Objectively speaking, our universe is infinite. Our solar system, huge as it might appear, is no more than a tiny pinprick in the fabric of our galaxy. And our galaxy, as absurdly vast as it seems, is just a small puff of gas and dust in an ever-expanding cosmos.

‘You’re a ghost driving a meat-covered skeleton made of stardust, riding a rock, hurtling through space.’

And the other saying? The one by Carl Sagan?

‘The Earth is a very small stage in a vast cosmic arena. Think of the rivers of blood spilled by all those generals and emperors so that, in glory and triumph, they could become the momentary masters of a fraction of a dot.’  – Carl Sagan – Pale Blue Dot, 1994

What does this mean? Well… It means the sum of humanity’s value to the universe is nil. And the sum of an individual human – I scarcely want to mention it for fear of insulting everyone. We’re small. Really small. To call us grains of sand on an immeasurably huge beach is unfair to grains of sand everywhere. We’re tinier than that.

I’ll say it one more time so you know I’m not kidding.

We have no objective value. None. Nada. Zilch. 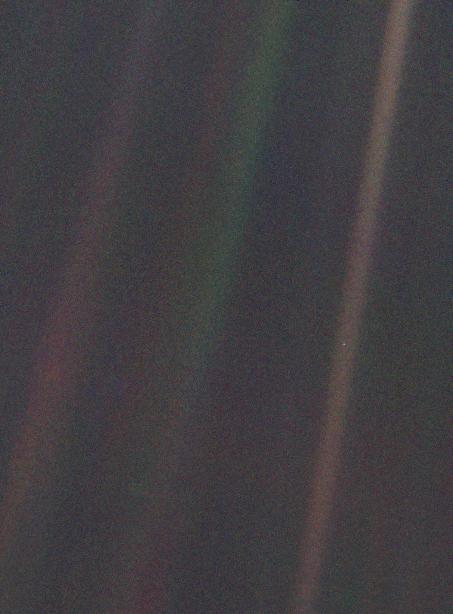 See that tiny speck in the middle right of this Voyager 1 photo? That’s Earth.

Should our smallness bother you?

No. Not really. Go about your life. Have fun. It’ll all work out in the end.

Does it bother me?

Before we go any further, let’s define something:

And yet here I am.

Anymore, waging war against my instinctive nihilism is my life’s defining challenge. I know I’m not alone in this, but I do tend to focus on it perhaps more than the average person. As I grow older and my comfort level with having no meaning deepens, I feel an increasing urge to escape this world. And no, I don’t mean die. What I’m looking for is an escape from society. From people. From places. From things.

But I’ve got two complications. And therein lies the struggle.

Complication 1.  I enjoy this life despite its meaninglessness. When I’m able to forget my smallness (or at least set it aside) life tends to be fun. And while I realize not everyone is as lucky as I am to enjoy life, it feels pointless to carry any semblance of guilt.

Complication 2.  We’ll get to this one later…

Life is fun. Until it’s not. The exhaustive circle in which I’m spinning is often tolerable…except when society’s weight comes crashing down upon me. As an author and artist who makes his living with books and paintings, I’m obligated to have a presence in the world. I have a Twitter feed. A Facebook page. An Instagram profile. And although I pour my daily passion into maintaining these things, they aren’t me. They’re not real. They’re smaller than I’ll ever be, and I’m pretty tiny. They’re more meaningless than everything else, even though that’s impossible.

And when I stare out into the world, whether through the internet’s lens or with my own two eyes, my struggle deepens. I see the world we’ve created and I find it hard to feel this thing people call ‘hope.’ I suffer an existential ache – a deep, dark sense of ‘Why am I doing this? What do I hope to accomplish in this place?’

The politics. The wars. The murder. The rape. The ideologies. The people who talk as if they know many things…

I can’t stomach them.

I can’t make myself care. 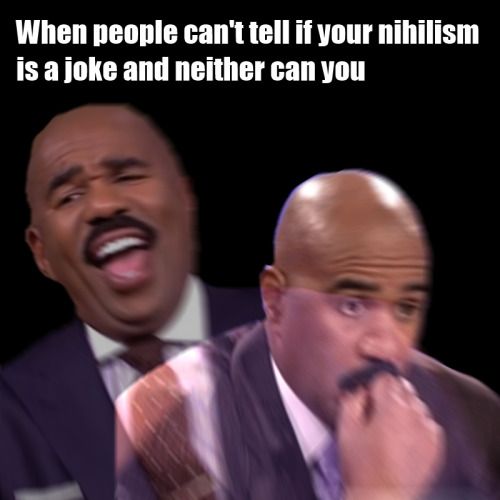 Memes are stupid. And yet…

And so it goes. There’s nothing I can do to stop these things. I can no more slow society’s never-ending march than I can leap across the galaxy and settle alone on a planet far from Earth.

Sometimes, our powerlessness isn’t evident. Lacking meaning, humanity invents things to amuse ourselves, to distract us from our insignificance. We’ve constructed pantheons of culture for the sole purpose of entertaining ourselves. We’ve unearthed every possible form of distraction, to which we flock the moment our daily work of survival is done. And, speaking of survival (which might once have been the truest form of human meaning) most of us really don’t struggle to survive anymore. We’re harder to kill than ever. We’re seven-billion and spreading. We’re able to grow older than ever before, all the while coming no closer to knowing our purpose in this universe.

But for all my talk, for all my desire to wander off onto some far and quiet beach in the middle of nowhere, there’s a reason I can’t. I call it complication number 2, even though it’s not a complication at all.

He’s six now, and he doesn’t know much about this crap-stew we call life. For as long as I can, I’ll keep it that way. I’ll let him savor his childhood. He’ll see none of my cynicism. He’ll not hear me talk about about grains of sand, pale blue dots, or the hopelessness of choosing one side (of anything) against another. He gets to make up his own mind about these things. To indoctrinate him to my thought process would be to kill a part of his individuality.

And yes, I realize the hypocrisy. 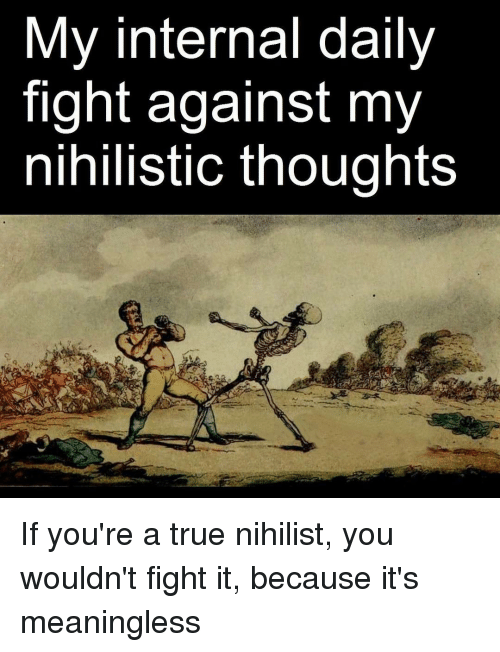 I guess I’m not a ‘true’ nihilist. Or any ‘ist’ for that matter.

In the beginning of this article, I talked about humanity’s insignificance. Yes, it’s true. We’re insignificant, all of us. It’s not a belief. It’s reality, and there’s no going around it. And yet I can’t help myself. When it comes to my child, I don’t want to punish him by teaching him the brutal truth. If he learns it on his own (and he likely will one day) it’s ok. But I won’t be a mentor in this regard. I’ll allow him to invent his own meaning, just as many other billions of people do on a daily basis. If he wants to be religious, so be it. If he wants to dance with the rest of society and listen to Justin Bieber albums all day, ok. I’ll not try to stop him.

In doing so, in playing the part of unbiased, open-minded dad, I’ll struggle. I’ll toe the line between not giving a f**k and teaching my son to genuinely care about the world he lives in. It won’t exactly be pretending. I do care. And I do think the world can be a wonderful place. But at the same time, I’m acutely aware of ‘pale blue dot’ syndrome. We’re small. We’re pointless. The only reason my son has meaning to me is because I decided it would be so. 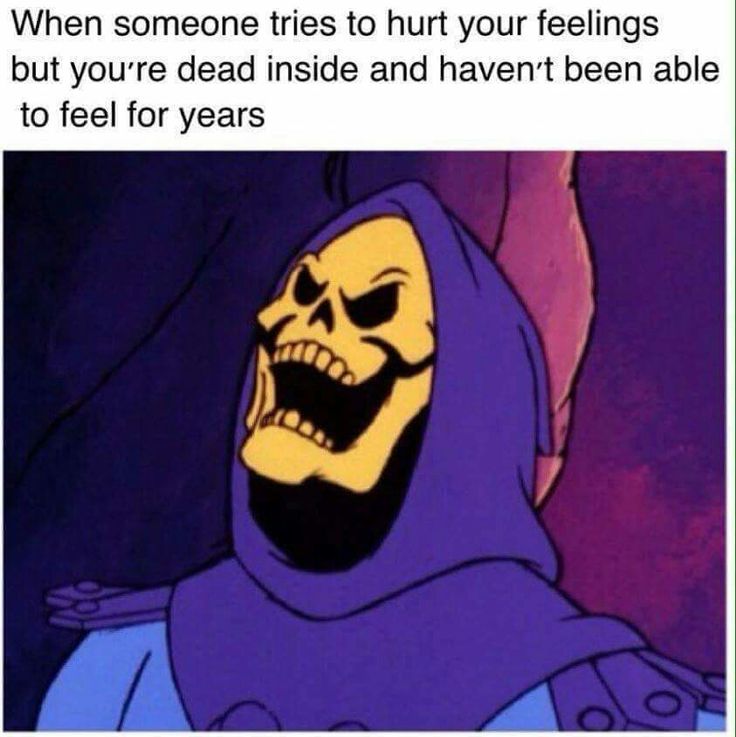 If there’s one thing I hope, it’s that my kid won’t be like me. Not that I’m miserable or full of horrid judgments for humanity – I’m not. But I’d like him to be free of burdens, free to decide what’s meaningful for himself. I want him to give a f**k. And truly, I hope this for all humanity. If for no other reason than life hurts more when we become aware there’s no prize at the end of the game, I hope my son gives as many f**ks as possible.

This is where I’m at. Stuck in the grey space between ‘aware of my meaninglessness’ and ‘willing to pretend meaning so my kid doesn’t become exactly like me.’ It’s an interesting place to be. I get to care, but not care. I get to glimpse hope through the eyes of another, and sometimes pretend his hope is my own.

There’s no meaning but what we make for ourselves.