Notes from a (mildly) successful author

But nor is it insignificant.

So here I find myself, two years after starting my self-publishing journey.

It’s not a terrible place to be, I guess. I’m not beating myself up about it, but nor can I pat myself on the back. To be honest, I don’t know what I expected in terms of success. When I started this journey I didn’t have a well-crafted plan, a true marketing focus, or an end-of-line goal. It was just me, a small pile of fantasy books, and a notion that a few people might like to read them.

And suddenly the idea of mere modest success didn’t sit so well with me.

Let’s jump back in time a bit. Last year I was at a friend’s house party. I was there alone, no date, but most of the others had significant others. As I sat on the couch, cocktail in hand, I people-watched. Cute girls, I observed. Young dudes. But WTF? Everyone is on their cell phone. An idea struck me right then and there. A non-fiction book. Something I’d never even considered before. Something simple to read at parties, break the ice, and pry people’s noses out of their devices. In that moment, the 101 Questions for Humanity series was born. I published the book in less than a month…and all of the sudden sales started to rise. (Special thanks to the UK for buying the hell out of these.)

So. Yeah. A non-fiction book. By a guy who’d only ever written deep, dark fiction. At the time I wrote it, I still didn’t have a plan. But I did have the drive. Know what I mean?

That was about eight months ago. And today here I am, still pounding out words. I’m floating in the grey space between not-at-all-successful and full-time-pay-all-my-bills-writer. I imagine this is where most of my contemporaries sit. We don’t make enough cash to quit our jobs (yet) but nor are we the sort to publish one or two books and sell them only to sympathetic families and friends. We pay our utilities with our royalties, but not our mortgages. Our sales charts look like roller coasters, neither flat-lining nor reaching the grand plateau of holy-shit-I-made-it. 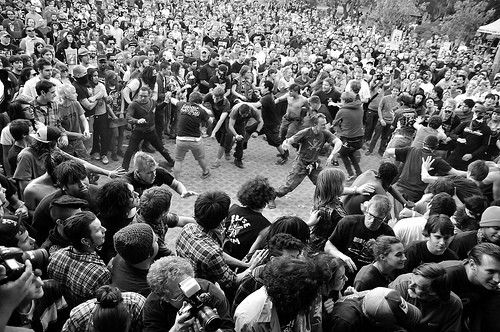 It feels a little like this. Battling for crowd supremacy. Sparring with a thousand other people who want the exact same thing.

I guess, given that I’ve only been at publishing two years, and taking into account I have a kid, a terrible day job, and an aggressive social life, I should probably be happy with being in Middle-Land. It’s not so bad. I could walk away right now holding my head high, thinking to myself, well, I wrote more words and sold more books than 99% of the population. I could probably give up the art and never look back.

But if you know me…and more importantly if you know human nature…sometimes settling for mediocrity isn’t in the cards.

I’m going to write until I’m dead. That’s just how it’s gonna be.

A while back, I penned a piece about enjoying healthy competition with your peers. I launched it with writers and artists in mind, but really it applies to everyone. The idea is this: if you want to be better than everyone else, you have to BE better. You have to live it, own it, breathe it. And when you find yourself swimming with ten thousand other fish and you’re aching to either push on or quit and try something else, you’ve got a tough decision to make. Existing in mediocrity ain’t easy. It’s hard to push yourself to the limit, harder still when you learn the fruits of your labor are smaller than you hoped for. You can quit and be happy. You can keep on keepin’ on, content with being in the middle. Or you can roll your sleeves up and get ready to fistfight the entire world. It’s your call, really.

Look, this is not where I get motivational. I don’t have any advice to speed anyone on the way to success. That’s not really my thing. But…I do have a few observations:

Being in the middle of the pack doesn’t suck after two years. It probably will after ten.

Having modest success feels a half a click better than having none…but ten clicks worse than earning big success.

Consumers of books and art don’t usually need perfection. They want to be engaged. They want an emotional response.

If you can keep giving it to them, you’ve got a shot.

My point is that swimming with the crowd won’t kill you. It’ll sting a little every day you’re stuck in it, but it’s not like swinging and missing completely.

Sudden stops are my kind of thing.