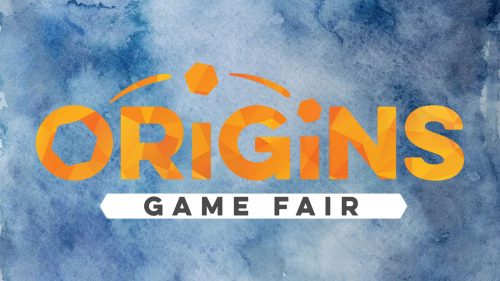 The past few years I’ve been able to make the trek northward to Gen Con. With the pandemic, 2020’s Gen Con was postponed, and after various new dates were determined for not only Gen Con but also Origins, our group made the decision to go to Columbus, Ohio instead. Partially because even at half capacity, Gen Con would still be around 35-40k in attendance, whereas Origins in 2019 was around 20k. It felt like the more prudent option of the two. Thankfully Gen Con allowed us to roll over our badges one more year, so hopefully, we’ll be back in Indianapolis in 2022.

Lee and Egg had gone to Origins a couple of times and reported having a good time. I knew that no matter what, this trip probably wouldn’t give me a complete picture of the convention due to a potentially reduced. 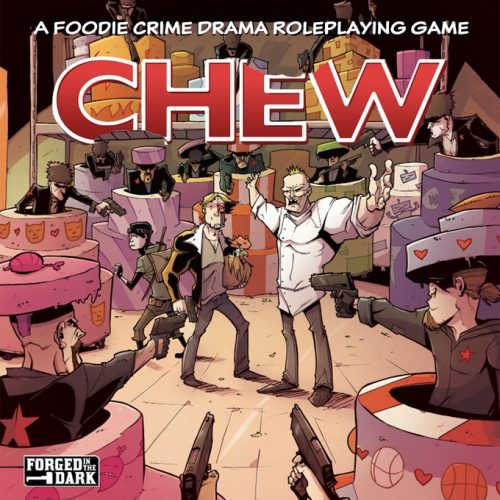 Thursday began with an afternoon game of CHEW, a roleplaying game based off the comic book of the same name. The concept is that you live in a world where poultry is illegal and the U.S. Food and Drug Administration is now the uber-powerful agency. While I am familiar with the comic book, I must confess that I have not really read any of the comics.

There were a number of pre-generated characters to choose from, and after we all made our choices we start our adventure getting ready to go on vacation, departing from the Baltimore Airport. However, we are pulled aside for a special assignment to discover why a nearby research island has suddenly lost 30 of their prized chickens. As we proceed on this mission, we learned that not all is as it seems at the facility, and that, perhaps, the chickens are not merely animals.

If you’re thinking that the premise is fairly goofy, I’d say you’re spot on. At the same time, we had a good group at the table who all leaned into the humor (even when it was at their character’s expense). The game is currently in the midst of a recently (launched on Tuesday I believe) Kickstarter. You can find it here. 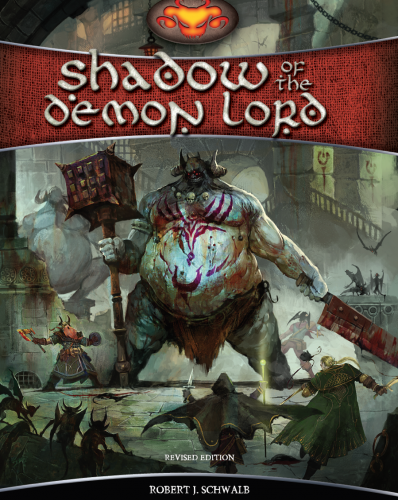 Shadow of the Demon Lord

I remember seeing this game when it was initially Kickstarted a number of years ago, but this was all of our first time playing the game. It is set in a Grim Dark world, where it would appear that the darker forces have succeeded in turning the world into a darker reflection of itself. And while there are those heroes who will rage against the darkness, it is supposed to feel like an uphill battle. For the rules, they were very similar to Dungeons and Dragons in a lot of ways.

For this adventure, it was a twist on Night of the Living Dead, with a bunch of us stopping at the same Tavern just off the road. After finding a dead man upstairs, the reanimated corpses from all around begin to converge on our spot. It was here that I think I misjudged how well I might be able to help with my Clockwork, and ended up taking enough damage to reduce me to one hit point. And while there were opportunities to potentially heal a little bit in between the waves of the dead, you had to make a choice on healing or fortifications or potentially trying a ritual to help put an end to it. Sadly, as the waves became worse and worse, we began to fall before the hordes until eventually, all but one of us died.

During the year when we roleplay online, Egg is notorious for his horrible rolls. I mean, his rolls defy logic, luck, or probability. However, the universe has decided that when he plays during a convention, his dice treat him much, much better. Yet, that terrible luck had to go somewhere… and this time, I was the sacrificial lamb. At one point during the game the GM asked me if I’d actually hit anything the whole session (this was probably 2 hours in). I had early on, but since then I rolled a series of dice that only served to mock me.

I wonder if this was one of those adventures wherein an attempt to show the players how dangerous the world is, they pushed things to make it extremely difficult to survive? One thing I did really like about the system was the initiative where you could choose to act Fast (1 action) and go before the monsters or Slow (2 actions) and go after the monsters. It streamlined things really well, and I wouldn’t mind trying to incorporate it into other games we play.

You can find out more about the game here.

On Friday, we made our way into the Dealers’ Hall to check out the various booths. From what I’ve been told, normally this stretches at least two of the exhibit halls; however, the area with the dealers and companies were confined to about 1/2 of one of the halls. There was still plenty to look at and buy, but I’m sure in a normal year it would have been a whole day to really look at everything, whereas, we probably spent around 5 hours in the Hall all told over three days, and I felt like I’d seen everything (and some things twice). 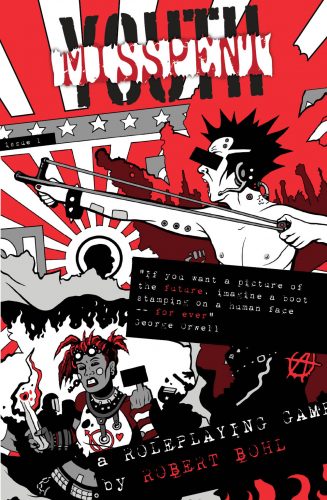 You play youths (between ages 12 to 17) who are raging against the machine… whatever that particular machine happens to be. We started out brainstorming ideas for what the big problem with the world actually was. We ended up in a world where organs are harvested from the poor and given to the rich and old who use it as a way to prolong their lives. They wall off their areas to keep themselves away from the riffraff of the rest of the world.

We were EMTs sent out on our first solo harvest, but the patient we were sent to help had already been harvested. We managed to not finish the poor man off by taking his last kidney, but soon uncovered a hospital where people were being harvested against their will (rather than being paid something for their organs).

What was interesting about this system was that you the story is broken into scenes and you roll 2d6 and place a marker on a list of numbers between 2 and 12. You want to seed it with your own numbers, but the GM is doing g the same to trip you up. If you ever roll one of your numbers, then you dictate what happens in the scene, but if you land on the GM’s number, he narrates it. It was another case where I’d never seen a game do something like that, and I’d love to figure out a way to incorporate that type of idea to other systems too.

You can get the game here.

That’s the end of Part 1. Next week I’ll finish up the convention and reveal the best game I played all weekend.

Writer of comics and novels. In 2006 his first short story "The God That Failed" was published by Terminus Media in their debut comic Evolution Book 1. Since that time he has had stories published in Terminus Media's Evolution Book 2 and Evolution Special, Kenzer and Company's The Knights of the Dinner Table, and Four J Publishing's The Burner #3. Currently he is eagerly awaiting the digital publishing of his first creator-owned comic The Gilded Age #1 to be published online as well as his first novel The Dark That Follows later this year.
View all posts by John McGuire →
Tagged  Chew, John McGuire, Misspent Youth, Origins, Shadow of the Demon Lord.
Bookmark the permalink.