I was thinking about what I’m really doing when I’m writing a story. Obviously I’m putting pieces of a larger narrative together in what will hopefully be not only coherent, but also readable. But really I’m trying to do something else with the stories… I’m trying to answer a question for myself.

Why am I here?

What is my purpose?

What if I could change a decision I made long ago?

If I knew something terrible was going to happen, would I try to stop it… even if that meant putting myself through pain and heartache?

How much free will do we really have?

The big questions, the ones that philosophers have been asking in a much better fashion than I could ever try to do. They are trying to form an answer and so am I. My hope is that as I proceed I manage to gain those moments of discovery about the story but also about myself.

We all play this game in some way or another. We are caught in an endless thought experiment of what would happen if I had handled a situation differently. What if I had asked that person out? What if I’d gone to college in a different state? What if my parents never divorced? What if I never moved? Switched jobs? Fought for a relationship?

What type of person would I be if some of those things changed? Are we determined by our environment or are we predestined to act a certain way? What about the persons whose lives were are impacting? How do their lives change without us in them? 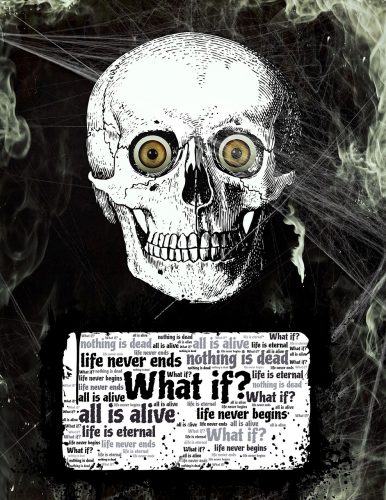 Image by John Hain from Pixabay

I think from the very first time I watched Groundhog Day, I was fascinated by a movie where so many of my questions were trying to be answered by the film. Where by the end of the film, Bill Murray has changed how he perceives the world and his place within it. He’s made himself a better version of what he was.

When I watched something like Mr. Destiny (look it up), we get to see a parallel world where Jim Belousi hit the big home run and his life changed completely.

He changed completely.  And not for the better. He learns that his old life is just fine for him.

When I watch It’s a Wonderful Life, we live Jimmy Stewart’s pain and joy only to see his life spiral out of control because of his good heart. As much as anything, the world around him is less for his absence.

Do you ever wake up to go about your day and feel something is off? It’s never anything you can put your finger on – something is just different. Your house, your car, the world?

Have your friends ever commented about an event as if you were there (when you clearly were not)? And then get mad at you when you say as much? Even going so far as to recruit others to inform you that you had indeed been there, whether you remember it or not.

<And since I don’t drink, that can’t be my excuse.>

Placed your keys in one place only to find them in another place later that day?

What if everyone else was wrong? What if you had fallen, passed through the fabric between parallel worlds? Could that happen?

What is the difference between some level of madness and a truth that is more insane than fiction?

What happens if you could relive your life?

What happens when the people you love no longer know who you are?

Who are you when you have memories of so many other versions of yourself?

I’m hoping you’ll join me on the ride.

Writer of comics and novels. In 2006 his first short story "The God That Failed" was published by Terminus Media in their debut comic Evolution Book 1. Since that time he has had stories published in Terminus Media's Evolution Book 2 and Evolution Special, Kenzer and Company's The Knights of the Dinner Table, and Four J Publishing's The Burner #3. Currently he is eagerly awaiting the digital publishing of his first creator-owned comic The Gilded Age #1 to be published online as well as his first novel The Dark That Follows later this year.
View all posts by John McGuire →
Tagged  John McGuire, Parallel Worlds, The Echo Effect, What if.
Bookmark the permalink.