Slayer, Anthrax, and a sleepy pit in Atlanta

If you’re a fan of thrash, speed metal, or any of the hard, fast, deadly metal bands from the 80’s all the way up to the modern era, it could be said:

These are things I know to be true.

Oct 5th, 2016 was one such formidable night. I was lucky enough to attend a mid-week show at Atlanta’s legendary Tabernacle theater. Slayer headlined, preceded by thrash metal pioneers Anthrax and Death Angel. The evening was cool outside, while the Tabernacle was as smoky and crowded as I remember from ages past.

It had all the promise of an epic night.

And for the most part, it delivered.

First, I have an admission. I arrived late to the show, missing opening act Death Angel completely. Like any sprawling city, Atlanta’s traffic is simply awful. One mishap on any of a dozen major roads shuts the whole scene down. I had every intention of arriving in time to catch every minute of each act, but the highways had a different plan in mind. So…… After two hours in traffic, I showed up just in time to grab two double Jack Daniel cocktails and plant my boots near stage-left, where Anthrax was already taking the stage.

Interesting note: just for kicks, Anthrax allowed the guy who plays Daryl on the show The Walking Dead to crash the stage just before their first song. I don’t know a damn thing about Daryl or his show, but the girls in the crowd did, and when Daryl picked up a bass guitar and pretended to jam, they soaked it up.

And then, boom. Anthrax started thrashing. (Or is it ‘thraxing’?) 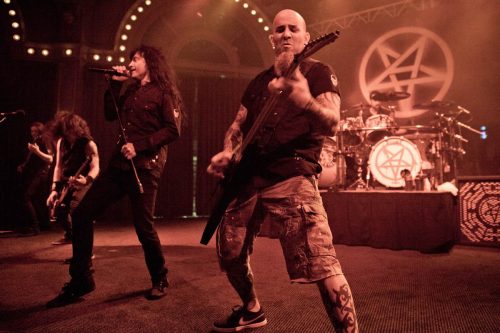 Now it’s true; Anthrax is a much different band than Slayer, so their inclusion on this part of Slayer’s US tour was an interesting choice. Singer Joey Belladonna belts out songs more in line with 80’s hair-bands, only with slightly more ferocity. Some might perceive them as not being as ‘heavy’ or ‘gritty’ as Slayer and other deathier bands. But as for my view, Anthrax’s spot in the metal pantheon is secure.

Anthrax’s set was maybe 45-minutes long. As one of the few ‘singer-only’ guys in the industry (most metal lead singers also play bass guitar) Belladonna hammed it up with the crowd between hooks. The set-list was energetic, especially when crowd-favorite Scott Ian took center stage and chugged through several awesome riffs. One noteworthy thing: Anthax’s style has always been kinda anthemic and sing-along, which is cool. One other noteworthy thing: despite their best efforts, the Tabernacle crowd just wasn’t biting. (More on that later.)

As my first Anthrax viewing (compared to at least six Slayer viewings) I was mightily impressed. Hair-band thrash isn’t exactly my thing, but ‘Thrax did it perhaps better than anyone. In the future, I’d like to see a show they headline.

After Anthrax went silent, and after another Daryl the dude from The Walking Dead sighting, the curtain fell over the main stage. Someone (bravely) had scrawled a bloody ‘Slayer’ logo on the otherwise pristine white curtain, which the crowd appreciated.

And so I drank.

And milled about the crowd.

And again I noticed that despite the promise of Slayer, most mighty of all thrash-metal bands, the crowd was…sleepy.

…with a rumble, a few drum smashes, and a growling bass, the white curtain lifted and Slayer emerged. The crowd erupted (kind of) and the world shook. Tom Araya opened with the title track from ‘Repentless,’ and it get better with each song. Compared to my previous experiences with Slayer (including a show at the Tabernacle back in the early 2000’s) I can say without a doubt Tom, Kerry, Paul, and Jeff Hanneman’s stand-in Gary Holt are still every bit the gods of death. While no one will ever truly replace Hanneman, Gary Holt is more than capable. His solos rattled the Tabernacle, ditto for Tom Araya’s ageless howls and Paul Bostoph’s percussive blasts. 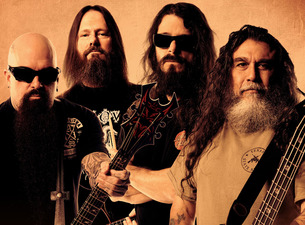 In case you care, here’s the setlist. (I’ve dropped an asterisk to the highlights of the night.)

The Antichrist * A fine, fine choice for the first ‘oldie’ of the night.

Postmortem * Probably the tightest, most energizing song in the setlist.

When the Stillness Comes

Seasons in the Abyss * Personally, I think this is Slayer’s best song ever. Played live, it’s twice as good.

Hell Awaits * I’d never heard this one live before this show. Completely worth the wait!

Angel of Death * Slayer almost always closes shows with this one. And for the last two shows I’ve seen them, they also dropped a tribute banner for Jeff Hanneman just for this song. 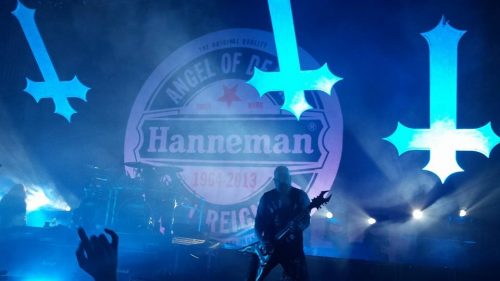 All of this brings me to one little thing that bothered me about the show.

It had nothing to do with the bands. They were beyond good.

It had to do with the Tabernacle crowd. More specifically, the Atlanta crowd. I’ve seen Slayer in several different cities, and yet every time I see them (or any band) in Atlanta, there’s always something about the crowds. It bothers me a little bit, their sleepiness, their reluctance to form a pit and start thrashing, their strange indifference to transcendent guitar play and machine-gun drumming. And on this night, I think Slayer and Anthrax felt the same. Surely the bands noticed the lack of moshing, the high volume of people gazing at their cellphones, and the general malaise pervading the masses.

Are we getting too old for this? I mean…I know I’m not, but are other people?

Is a Wednesday night a tough draw for heavy metal?

Or is there something about Atlanta, something about the specific mix of concert-goers making shows a little less uninhibited? It feels possible, given that I (an old dude) was one of only three people in a mass of several hundred in Tabernacle’s lower area willing to go into heavy-metal convulsions.

Despite Atlanta’s passive approach to headbanging, the show was awesome and the venue as perfect as it’s always been. If and when Slayer or Anthrax return, I’m all in. Maybe I’ll bring a few rowdy friends for good measure.

Next up…Carcass, aka the gods of grindcore.