I ran the streets, hung out at the local movie theater, chopped it up until the wee hours of the night at Waffle House, and eventually crept into the house shortly before the roosters did their morning call.

Ok, now that we’ve got the obvious lying out of the way, let’s talk about what my Friday nights were really composed of.

Homicide: Life on The Streets, and Sliders.

Homicide: Life on The Streets deserves its own multi-part epic post, as being a trend setter for cop dramas which have come since.

And no, I don’t mean that flashy, pop song laden drivel known as CSI.

I’m looking at you Caruso. Take those goofy sun-glasses off, and stop with the tasteless murder scene quips.

Nope, this post will be dedicated to reminiscing about one of my all-time favorite sci-fi television series’, Sliders.

Let’s travel back to a far off time, when sci-fi/ fantasy/ genre network television shows, were kicking butt, and  fairy tale creatures, vampires, or werewolves were nowhere to be found.

In the wake of X-Files, it seemed to a young kid growing up in Decatur, GA that network television was something of the shiznit when it came to providing a platform for fun, dark, and in some cases cheesy sci-fi/fantasy. 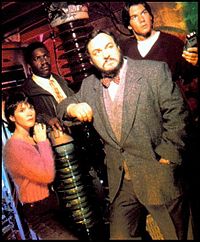 X-FILES. Millennium. Space: Above & Beyond. The Lone Gunmen. M.A.N.T.I.S. The Adventures of Briscoe County Jr. SeaQuest DSV. Hercules. Xena. Star Trek: DS9. Star Trek: The Next Generation. These were a few shows that rounded out my weekly immersion into the awesome depths of genre storytelling.

But for me Sliders, stood out a bit from the pack.

(Separate nerdy note: both Sliders and DS9 were my two favorite sci-fi shows of the 90’s, but today’s Sliders time to shine. 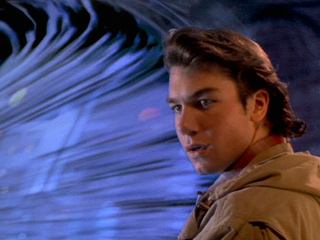 The show told the story of Quinn Mallory (Jerry O’Connell), a San Francisco based grad school physics major, who in his attempt to create an anti-gravity machine, stumbles upon something even more amazing.

See why a geek like me might get excited by this? Or even why the writer in me loved this series?

Imagine a mirror universe of our own, where due to a small change in the course of that world’s history, technological advancements, etc., these parallel Earths might have taken drastically different routes than our own.

The possibilities are endless in terms of storytelling, and viewing potential.

Without giving too much away about the pilot (which I think still holds up even today), Quinn is joined in his 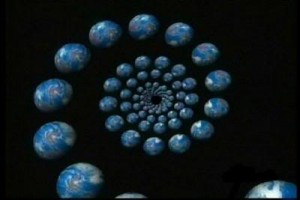 adventures to different worlds by his friend Wade Wells (Sabrina Lloyd), his mentor and teacher, Professor Maximilian Arturo (John Rhys-Davies), and the once famous R & B singer, Rembrandt “Cryin’ Man” Brown (Cleavant Derricks) who is accidentally caught up in the wake of Quinn and company on their first “Slide”.

When Quinn attempts to test his “Sliding” machine for the first time, he and his partners wind up whisked up in a 5 season dimension hopping jaunt. Unfortunately, due to a malfunction of the Sliding device (the timer) during the Slide, the group is caught up in a possibly never ending trip to get back home. 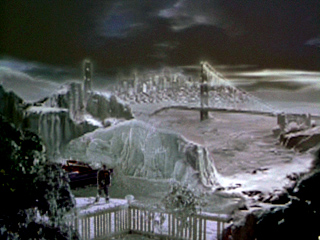 Starting with this solid premise, the original “Fab Four” traveled to such places where the Soviet’s won the Cold War, women were the ruling sex, the British Empire triumphed in the Revolutionary War, American’s were migrant workers who were traveling to Mexico for work, global warming had run it’s calamitous course, and so forth, and so forth. These awesome “what if’s” were what had me coming back episode after episode every Friday.

That, and the growing camaraderie between Quinn, Wade, the Professor, and Rembrandt. Though thrown together by forces beyond their control, these actors seemed like a far flung Swiss Family Robinson of the cosmos. Every actor brought their A-game to this series (even in the face of sometimes questionable writing). This made it all the more nerve racking to wonder if they’d ever get home, as I found myself caring about these folks with every subsequent episode.

A never ending quest to get home…..

Added to both these factors was a fun and healthy sense of comedy, edge of your seat heroics, and adventure which all coalesce into why this series was at times awesome.

Now to say that the show sometimes, or in later seasons didn’t keep the same quality storytelling as in the first two seasons, would be a lie. At one point it seemed as if the screenwriters were just pulling from whatever popular movie was at the local Cineplex. Don’t get me started on “Twister” world, “Jurassic Park” world, “Species” world, or even “Zombie” world (actually, that was an awesome, though silly concept for an episode, but I’m kind of biased, being a zombie nerd).

And there were often times where the possibility of meeting your evil doppelganger happened way too many times. I understand that on a parallel Earth, there might be a douche-y version of yourself, who hates everything. But when you use that trope one too many times, it gets a little tired.

There were other episodes or storylines where I was left scratching my head, in certain instances as “Mad Max/ No More H20” world, “Magic” world, or even the storyline that would dominate seasons 3-5, the rise of the Kromagg empire.

The Kromagg’s were in simplest terms, evil, humanoid primate Sliders who were hell bent on the domination of all parallel Earths. 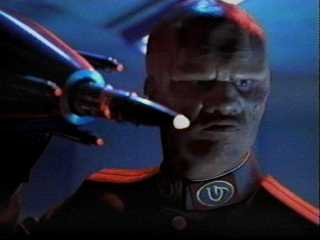 I’m going to pouty face you to death.

So, don’t get me wrong, as with any show, this one had its minuses, in addition to the numerous plusses to be found. Some sources chalk it up to corporate interference by the FOX bigwigs. Others say it was the behind the scenes favoritism/ in fighting amongst the cast and some of the producers of the show that caused a dip in quality.

Definitely do the homework, and you’ll find some doozies in terms of the behind the scenes drama of the show.

But ultimately, as a kid of the late 90’s who wasn’t inundated with all of this extra info, and plopped himself down in front of the TV to watch the latest escapades of the Sliders, the show was a godsend. Cheesy or formulaic though it might have been at times, there were a host of episodes which kept me entertained, enthralled, and just overall enjoying some good sci-fi. 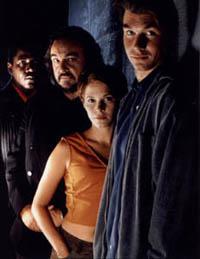 I simply enjoyed the idea of a group of travelers jumping from one different dimension, to another dimension, week after week, with the simple goal of getting home always in tow. Add to that, you’ve got some fun action/ adventure elements added to the mix, and the 13 year old Robert was satiated.

So if you’re looking for a fun sci-fi show to binge watch, check out Sliders on Netflix, Hulu.com, and other streaming providers.