He awoke at dusk.

His first breaths were more dirt than air.

He knew only the sound of the wind twisting through leafless branches.

…and of a woman’s voice roaming through his ears.

He couldn’t see her, not yet, but he felt her presence. She was near, perhaps standing above him, a slender black shape against a backdrop of nothing. The shadows in her eyes were grey and gauzy, and the evening’s light nothing more than spears of silver against the growing dark.

He blinked, but the shadows would not depart.

He tried to speak, to whisper, or even to croak a few clumsy sounds.

Nothing. His voice had not returned.

It was the woman who spoke first, but not to him, nor to anyone. He knew even without seeing that he was alone with her.

Out in the cold.

How did I come to this place?

He could not remember.

“Should’ve waited ‘til spring, you know?” The woman was farther away now, and speaking to herself. “Fingers raw from dirt half-frozen. Shovel full of splinters. Look at these hands. They look like farmer’s hands now. What would mother say?”

She said more, but he heard little. The wind picked up, and with a shiver he realized he was naked. Lying on the ground, half-buried in frosted loam, his helplessness confounded him. Why would he fall asleep in such a state? Why was he half-blind, mute, and smothered with the sense he’d only just been born?

He couldn’t even remember his name.

The woman’s shadow returned. He couldn’t see her face, not quite, but he glimpsed something in her left hand. It looked like a stick, straight and black, sharper than any sword in the world. The woman’s hair hung long over her shadowed face, and he knew it was raven. She, in fact, was raven. Everything about her looked and felt dark.

Or is it just my eyes?

Why won’t they work?

“Well?” The girl squatted over him. “Can you hear me?”

Somehow, he managed a subtle nod of his head.

“You’re cold, right?” she said without real concern. “See? I knew I should’ve done this next spring. I’ve woken you up, and you’re likely to die again by the time the sun goes down. It’s okay. If you do, I’ll just bring you back again. This stick is pretty useful. It fell from the moon, did you know?”

He groaned. Finally, a sound. The woman shifted on her knees, and he swore he caught a glimpse of her eyes.

The woman rose, walked away, and returned with something else in her hands. She draped the dark thing over his body—a blanket, he realized. It did nothing to drive off the chill in his bones.

“You can’t talk yet.” She hovered over him again. “Don’t worry. It’ll pass, I think. It had better, else you’re no good to me. What good’s a warrior who’s blind?”

“Right now you’re wondering who I am and why I’ve pulled your bones out of the dirt,” she continued. “That’s all well and good. Mother said after all this time you might not even remember your life, who you were, the things you did. That’s fine, too. In time, it’ll come back to you. It’s been about six centuries, so really…you should feel lucky I was able to find what was left of you. Did you know you died here? Do you remember how?”

He shook his head. The world beyond the woman came in and out of focus. The night was nearly upon him, and the sky colored with violet clouds and black tree branches.

“I’d warm you.” She leaned closer. Her dark curls touched his blanket, and her lips made the shape of something not quite a smile. “But my magic, you see, isn’t not really for warming. Or helping. That’s not how magic works, you know? It’s all pretty dark stuff. I wanted to believe otherwise as a little girl, but Mother showed me.”

“Your moth…your mother?” he stammered.

She stood up again and walked away. He heard the clatter of things: sticks, something made of cloth, the sound of water sloshing inside a waterskin. He wanted to focus, to remember, but every small noise washed over him as though he were hearing them for the very first time.

When she returned, she began building something around him. She produced a mallet from her satchel and began pounding long stakes into the dirt, all the while cursing the soil’s hardness. Afterward, she unfurled a great dark canvas and stretched it between the stakes.

A tent, he realized. She’s protecting me from the cold.

Darkness claimed the forest. The pale spaces in the sky, swallowed up by shadows, fled from his eyes. She pulled the tent’s canvas tight, and even the black branches vanished.

…just as my eyes were adjusting.

Finished with her work, she sat between his feet. He saw only the shape of her shoulders. All else was midnight.

“There now,” she said. “You’re all set. Normally, I’d turn us to shadow and fly all the way home. But…you’re too fresh. The flight might kill you, and really, the ritual to bring you back is more than a little tedious. And also…well…I guess it’s time to let you know—I don’t have a home anymore. They burned it down. I guess I could’ve killed them all, but all it takes is one lucky arrow, and there’d be no more me. You’ll come to learn the world needs me, just as it needs you, my friend.”

“Mine?” she said. “No. You’re not ready for that. Rest now. Rest, and try to remember your own name. You’ll need it before long. You’ll need everyone to know it. Because…how can the world be afraid of you if you don’t even have a name?”

With that, she left him. The tent flap fell shut, and the woman swept away into the night. Again, she said things to herself.

But he did hear another sound.

The night breaking. The wind rising. And whispers between the trees that were something other than human.

This excerpt is from an as-of-yet untitled piece.

It was to be the very first chapter in a co-authored fantasy novel.

But the idea was shelved, and my co-author turned to other projects.

…should I write this book alone?

…or should I leave this one in the dark?

…the return of darkness is a planned event, a spoke in the universal clock waiting to be ticked…

The Black Moon will descend.

The Ur will rebuild their haunted civilization atop humanity’s graveyard. 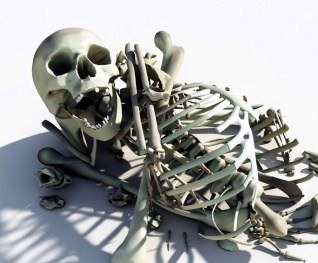 I’ve been so busy of late, I’ve neglected you.

Now that my whirlwind of new releases is over, and now that this and this are darkening the internets, life is somewhat back to normal.

Check that. Life is completely not normal at all.

For so many reasons: personal, professional, diabolical, the corners I’ve turned have led me to a new realm of space and time. My old comfort zone of sit back and write is lost…and a new zone being born. I have less than half the amount of time to write as I used to. My hours of peace and quiet have turned to minutes. Life tugs at me from all directions, popping my arms and legs from their sockets, stretching my creativity to its limit. I have marketing to do…endless marketing. I have a kid to raise, a home to inhabit, and little wars everywhere to win.

My response to this challenge? Do better. Write more. Logic be damned, I will become the machine my inner artist wants me to be. I’ll scrape off life’s barnacles and sail faster than ever. I will, I will, I will.

So then, my two weeks of self-imposed writing vacation are over. Books one and two of Tyrants of the Dead are published. It’s time now for my penultimate project, my coup de fantasy gras. I’ve decided that once I’m finished with book three, I’ll never again write an epic fantasy series. I’ll stick to traditional length fantasy, and I’ll continue branching off into sci-fi and horror…and maybe even *gasp* erotica (though I still need a model to shoot the cover art for that whole idea) but my days of writing 400k word-count epics need to end. For sanity’s sake.

Which leads me to book three: Nether Kingdom. With Nether Kingdom, I expect to knock all my previous efforts off of their darkest novel of all time pedestals. I’m aiming high (and not just word-count wise). I don’t want a nice, clean wrap-up to the series. I don’t plan to mail it in. Just because NK is my last planned epic doesn’t mean I’m not gearing up for it to be my best work ever. I’m trying to redefine the genre, punch every expectation in the mouth, and give Tolkien himself a run for his money. I want my villains to make my readers sick to their stomachs, my heroine to scrape rock bottom, and every character in-between to love and hate as hard as any real-life human could ever dream of. I want to plunk fantasy, sci-fi, literary fiction, and horror into a blender and spin out a liquor so frosty and delicious the patrons at chateau d’ J Edward will never want to return to their dreary days of Twilight, 50 Shades, and the 700,000 varieties of sexy gay vampire steampunk currently drowning the market. 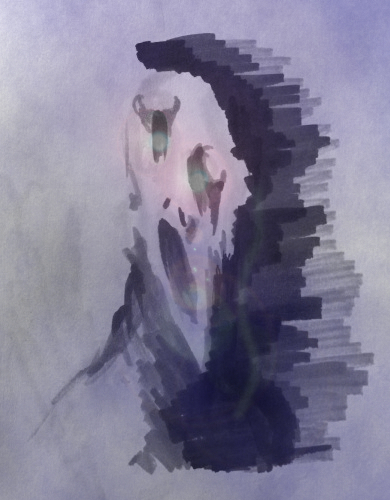 Eileen Herron’s Ur sketch. Aka; a glimpse of the world’s end.

Thus it begins. As of tonight, I’m sitting down to carve up NK‘s 300k words into something less…paper weight-ish. I’ll cast some long shadows, sprinkle some grave-ash, and light some violet Ur fires. I’ll do the same every night for the next six months or until all that’s left of me are bones. I’ll still write for Tessera and over here, and maybe I’ll fire off a short story sequel to this, but otherwise I’ll not be side-tracked. No booze, no sex, no fist fights with hobos or long, slow trips to the beach. I’ll be a machine. I’ll date my characters. I’ll get drunk off the words.

Because…in the end…this is what makes me happy.

Update {March 3rd, 2017} – Nether Kingdom, the final book in the Tyrants of the Dead series, is complete. Read it here.