It’s a common theme nowadays that writers (or any artists, for that matter) aren’t in competition with one another. That we’re all pals in the industry. That we’re fighting on the same side to haul readers into our books collectively. 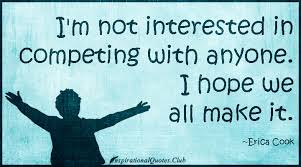 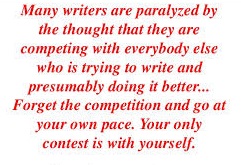 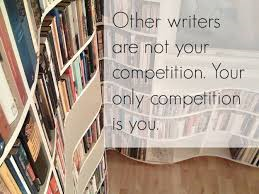 I could probably dig up a thousand of these. And it’d be barely scratching the surface. I guess these are nice sentiments…maybe. They create friendships. They foster collaboration. They bring people together.

And I reject them completely.

Before we do battle, let’s be clear about some lines in the sand. We’re not talking about artists and writers who create for fun. If someone publishes a lone book or series and then wants to wander back into a normal existence, that’s cool. If they want to stop, collaborate, and listen, it’s worth supporting. And we’re also not talking about those wonderful people who create with the intent to be non-profit. If an artist’s goal is to put out a steady stream of awesome simply for the love, who couldn’t support that? It’s free, after all. Those who desire it don’t have to give up any resources. Any cash. Any moolah.

As for the rest of you, I adore you like brothers and sisters. But let’s be clear that we are in fact competing with one another. No…that’s too mild. We’re at war. 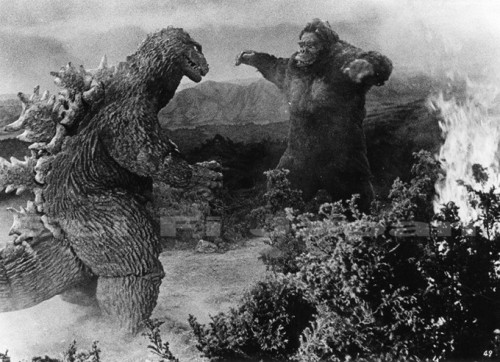 Godzilla vs King Kong. Twilight vs Blade. Plants vs Zombies. Me vs YOU.

In any given market, any segment of any economy, there’s a little thing called market share. You’ve heard of it. If there’s X amount of money available to be spent on resource Y, companies A, B, and C are all gonna fight each other to the death to control Y and earn X. Sure, they might be pals after hours. They might drink together, hit the golf course as a foursome, and sleep with each other’s spouses. But when they’re on the clock, make no mistake. They’re gunning for one another’s throats.

To counter this argument, the artist might say to herself, “But J, you poor malcontent, in the world of art and written words, Y is limitless. Art has no boundaries.”

Nada. Negative. Nope. Y is not limitless. Art created with the intent to make a living has boundaries. These boundaries are malleable. They move. But they exist. And moreover, despite the fact that every living human seems to want to write a book these days, there is a limited supply of quality available.

More to the point: just like in all other markets everywhere, X (money) will always have a finite value.

And X is exactly the hill we’re fighting to climb.

Look. It’s true. I savor artistic collaboration. It helped things like this and this see the light of day. It keeps artists talking, moving, and colliding. Sharing other writers’ works is a great endeavor. The best conversations happen between those with a similar purpose, whose visions align, and whose swords are sharpened at the same millstone.

Think on these, fellow artistic warriors:

Those of us who give a damn, who really want a career out of writing/painting/sculpting/fighting, want to be the best. And nothing less

We want to be the mofo who makes it, not the one forced back into a boring ‘real’ job

We want the fruits of our labor front and center, and we desire to dethrone the Twilights, the Mockingbirds, and the 50 Shades of WTFever

We care more. We work harder. We don’t do easy satisfaction

And though we may smile for one another’s successes, we tend to get a little green when we see it

If you’ve no idea what I’m talking about, be at peace. This battle isn’t for you. Walk the tranquil path of creating without fear. That you desire to make beautiful things just for the sake of it is commendable. It’s enviable. It’s sublime. But for everyone else, everyone fighting for Y and X, don’t be deceived. Don’t lull yourself into a false sense of we’re-all-on-the-same-team. Reject any meme suggesting you need to be BFF’s with other writers or that you shouldn’t at least try to out-write, out-paint, and out-create the fuck out of everyone else. You are in a competition. You don’t want to be the third-string quarterback, the benchwarmer, the artist sitting on the sideline.

So stop kidding yourself.

You’re committed to this battle.

And when the world ends, you want to be remembered.

If that was too harsh, try something fun.

If it wasn’t harsh enough, this might be for you.