Imprisoned as a little girl, Lys awakens in the world’s lowest prison.

She’s to become a concubine to a faceless noble in a land far from her native home. But when fate intervenes, she seizes her only chance at freedom.

To save her long lost caretaker, she means to cross the wasteland of Vhur, in which the diseased Iritul have hunted humanity near to extinction.

Even if it means a confrontation with the deadliest man alive – The Heart Stopper. 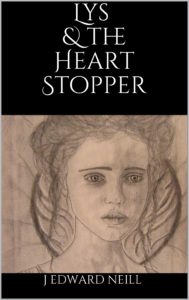 Lys & the Heart Stopper is a standalone short story in the Hollow Empire – Night of Knives universe.

And with the cold season’s arrival, it’s time to gather ’round the fire and read until the world thaws.

We’ve got just the remedy:

The sexy matte-black SOFTCOVER. A bounty of fantastical tales to steal your nights away.

The electrifying E-BOOK. Drown in the deep, dark waters of your Kindle.