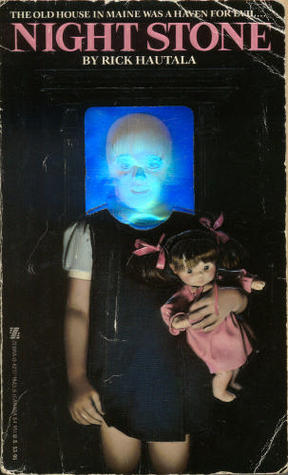 When I first caught the reading bug in my early teens, it was horror fiction that grabbed hold of me and changed my life. I use to be one of those kids that hated reading. It was torture. A kind soul introduced me to Stephen King and it was then I realized I’d just been reading the wrong books.  In 1990/91 I stumbled across a copy of Night Stone by Rick Hautala. It was the paperback edition with the holographic image. I can’t recall now where I found the book, but it looked creepy so I decided to give it try. The book ended up giving me nightmares. But I kept reading! I suppose reading a scary book just before bed, on the floor, peering under a large bed with darkness creeping across the your blanket, could have played a role.

I read Night Stone while my grandmother was visiting and when my grandmother came to visit I always gave up my bed. Was it just the timing of it all? Reading a horror novel and imagining monsters under the bed? I’ve decided to see if the book that scared me silly back then would do the same 24+ years later. I no longer have the paperback, but the book is now available for Kindle. Look for my verdict next month! 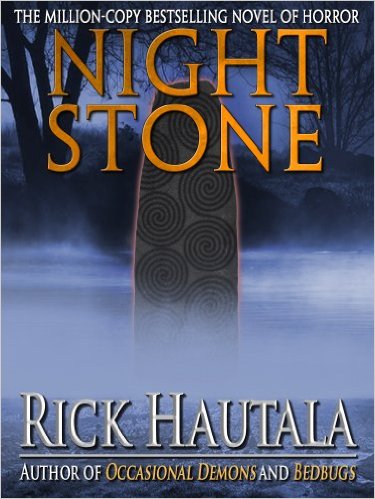 The old house in Maine gave Beth the creeps. She couldn’t believe they were really moving in. If it weren’t for the wooden doll she had found in the closet of her new bedroom, she would have been miserable. But the strange hand-carved figure fascinated her, and she sensed with a child’s instinct that she had to hide it from her parents…

It was a house of darkness and shadows, but with her secret doll, Beth wasn’t afraid. Not even when she heard the scratching and whispering at night. Not even when the tall, massive stones of her dreams began to ooze with blood. For as she stared into the eyes of the wooden doll, she heard it call to her and felt the force of its evil power. And she knew that it was about to tell her what she had to do…

In 2010, I created my first digital painting in Photoshop CS4, with only a mouse. The painting began as pencil sketches I meant to refine and then use for a watercolor, but everything was put on hold when I needed surgery to remove my gall bladder. As oftentimes happens, my gall bladder woes were sudden and severe. I went to the doctor in pain on a Thursday and ended up in surgery on Monday. Let me say too, just because it’s a simple surgery doesn’t mean you’re ready to run a marathon afterward. Surgery is mega painful. Maybe more so in my case because I cannot take those wonderful pain medications everyone loves. Hydrocodone and anything similar to it or more strong triggers intense nausea, dizziness and vertigo. The day of my surgery they nearly kept me overnight because I was sick–from the damn pills. I convinced them I was okay, that I could go home and of course they gave me a prescription for the pills. But I didn’t take them. So the day after my surgery and the weeks after were difficult (that’s an understatement if you weren’t sure). I couldn’t take anything but Tylenol. I spent a lot of time in my recliner and that’s where I created this painting for the EBSQ Spam and Trout Show. 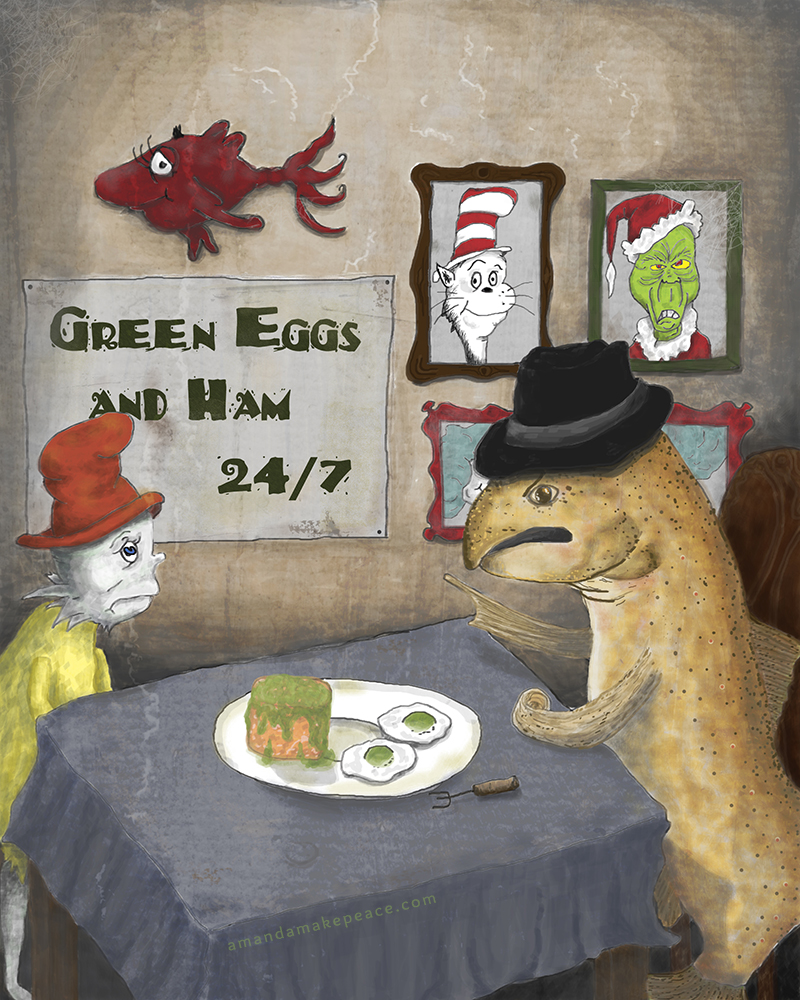 After a long day of chasing leads, all P.I. Terry Trout wants is his green ham! Did the Seuss Lounge really think they could disguise Spam with a green sauce and nobody would know?

My determination pushed me to finish this painting in time for the online exhibit and that hard work paid off. My painting, Green Eggs and Spam?, won Member’s Choice. Looking at this painting, I can’t help but snicker. I’ve come along way with my digital skills since 2010. 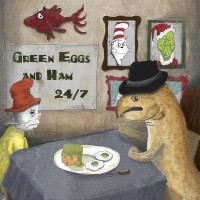 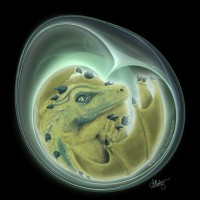 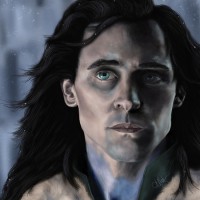 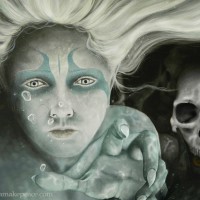 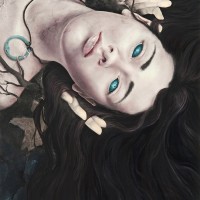 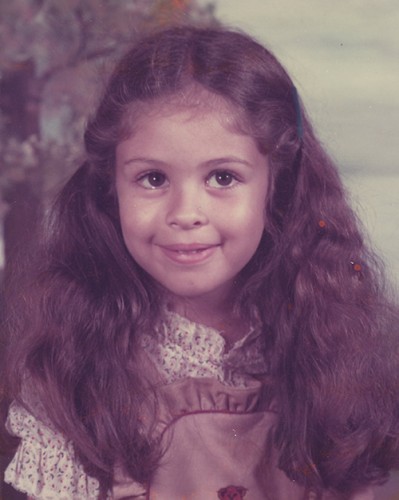 We all have our own path to follow, but the rate at which we reach various checkpoints in our lives is influenced by our determination, perseverance, and sometimes events we cannot control. I’ll be honest. I’m not where I’d like to be in my life. I try my best not to dwell on that, instead I focus on pushing forward. But here are the facts:

Cancer at 17 (and the fallout after) was out of my control. The health issues that followed after were and are out of my control. They set me back. When I was a senior in high school I didn’t have time to focus on applying to colleges. I was fighting for my life. With or without those obstacles, there are some pieces of advice I wish I could have told my younger self.

1. Don’t let one bad experience stop you from learning and growing.

I had an awful teacher for art in middle school. This woman should not have been teaching, let alone spreading her ugliness to impressionable minds. The experience soured me to art classes. I loved art, but stayed away from classes till my senior year high school, when I needed an easy class I could take while on chemotherapy. When I graduated, that teacher lectured me on not taking art all 4 years–not what I needed either. But it was my choice to let those experiences stop me from growing as an artist. I did eventually get over that chip on my shoulder.

2. Don’t avoid drawing the things that scare you, tackle them head first.

When I was a kid I loved drawing horses and after that any and all animals. I avoided drawing people like it was the plague. I recall thinking, I’ll never be able to drawing a human face. Never. So I avoided doing it and then I took drawing in college and was faced with a self-portrait a week (on top of our regular assignments). I did it and realized it wasn’t the nightmare I thought it would be. I could have saved myself a lot of stress and anxiety if I’d just given it a try earlier. 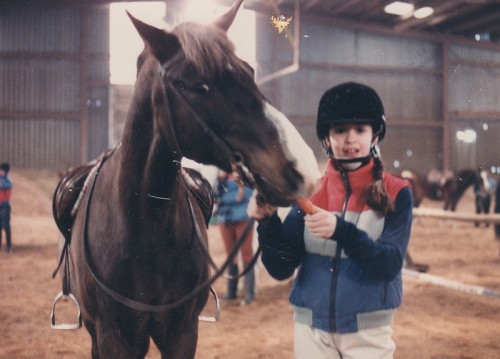 3. Don’t paint from just the surface of yourself, but from your entire soul.

I’ve always had a passion for nature, fantasy and horror. I grew up on Star Wars, Labyrinth, The Last Unicorn, The Hobbit (animated) as well as, Alien, Terminator and old Vampire films. I spent a lot of time riding horses and wandering the woods in our neighborhood. I kept snakes, salamanders and toads for a day in my aquarium. I loved all these things but for many years my art rarely touched anything fantastic. I’m still not quite sure why fantasy was not part of the equation, but once it was, I felt complete and my art began to be something more. Don’t limit yourself! 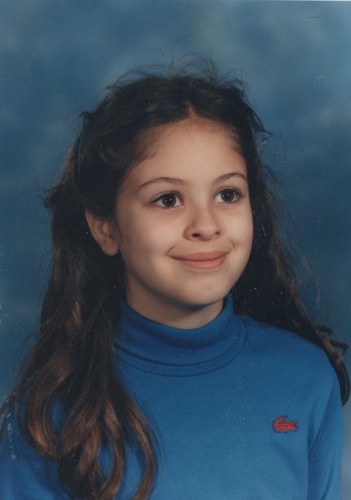 4. Don’t listen to people that know nothing about art.

We’ve all come across the person on Facebook who feels they have to inject their unqualified opinion into a conversation. Those people exist offline too. Always be careful who you let sway your path. Are they giving you a valid critique or are they toxic? Good advice from a professional is invaluable, but bad advice you didn’t even ask for can set you back.

5. Don’t ever think it’s too late and don’t make the mistake the comparing yourself to other artists.

Everyone seems to be in a race these days. I’m 39 and there are times when I feel anxious that I’m not farther along. But I know a few artists in their 20’s that feel this way too. We spend too much time comparing our art and our careers to our peers. Don’t fall into this trap. It’s never to late to make art your career. Keep pushing ahead. Keep growing. Keep creating.

I began reading the Harry Potter books when my daughter was three or four years old. They weren’t books I had to think my way through. I read them to laugh, to escape, to have fun.The first four books I read before I moved to the UK 2004, another two while living in London and The Deathly Hallows when I returned to the US in 2008. Several memories stick out over course of those eight years.

In 2002 I graduated from the University of Georgia, a few years off my original target but I graduated nonetheless. I’d left college in 1997 due to a slew of bad choices, then married and had the child doctor’s weren’t sure I’d ever have. After my short attempt at marriage ended, I wanted to finish my degree, not something all single mother’s would have the courage to attempt, but I beat Cancer, it couldn’t be as difficult as that, right? The trip to Paris was a gift from my mother and step father for beating the odds.

The seats, on my first international flight, had monitors built into the back of the headrests. When I found Harry Potter and the Sorcerer’s Stone on the movie list I could hardly contain my excitement. I’d not seen the movie because I didn’t have anyone I thought would want to see it with me. I wasn’t as brave then as I am now. With the earphones plugged in, I escaped into another world. It was my half contained giggles throughout the movie that eventually pulled my mother into the films too.

2. I took my daughter to see The Prisoner of Azkaban in London.

My daughter wasn’t reading the books yet, but she’d caught onto the Harry Potter craze. (Up until a couple months ago we still had our VHS copies of The Sorcerer’s Stone and The Chamber of Secrets.) When we moved to London in 2004 The Prisoner of Azkaban was still out, little did I know how creepy the Dementors would be! But it didn’t phase her one bit. She’d obviously inherited my iron will. This also happened to be our first movie going experience at our local Odeon on High Street Kensington. I’ll never forget it.

3. My daughter and I read The Deathly Hallows together (or rather simultaneously).

When we moved back to the US in 2008 my daughter decided it was time for her to read all of the Harry Potter books; which is an easy task for a child who can read a 300 page book in one sitting. I’ve seen her read three such books in one day! While she caught up, I re-read The Half-Blood Prince. Then we both read The Deathly Hallows. Until Part 2 of the film released, we both felt as if we belonged to a secret club. My mother has seen the movies, but not read the books. Yes, she’s one of those people. My daughter and I were careful not to give anything away, but when she wasn’t looking we gave knowing smiles. We knew the truth (about Snape).

And now, you know the truth. It was my fault. I sucked my entire family into the wizarding world of Harry Potter!

What better Throwback Thursday than a flashback to Thanksgiving with The Muppet Show!?