Everyone is a Philosopher

I’m not sure what I was thinking when I said, “Yeah, I’m in.” I mean, I’m at least ten years older than everyone else here, probably more than that.

I’m also single. I’m dressed like a douche. I’m tired. And I’m the only one in the room not glued to his phone.

Yeah. That’s the truth. I’m in a house with twenty people, most of them strangers, and everyone except three little kids is nose-deep in their phone. I count four Xbox controllers lying dormant in front of a paused game on TV. I see plates of half-eaten food and abandoned drinks. Even the music, probably something-something by Justin Bieber, thumps a little quieter in the background.

It’s as if the Biebs himself is ashamed to be heard at a party at which no one is talking, flirting, or looking up from their phones.

I figure I have three choices:

Leave. It’s not as if anyone will notice.

Drink a ton. And then hope a beautiful woman walks in the room in time for me to make a horrible first impression.

Or option three: wake the zombies from their phone-induced slumber.

The way I see it, one and two are boring.

Option three is where it’s at.

In a room full of twenty-somethings, I clear my throat and crack the overwhelming silence. People I’ve never met look up as if to say, “Who the hell are you to distract me from Facebook?” It’s ok. I’m not shy. I’m running on four Krispy Kreme donuts and three Solo cups of liquid courage. There’s nothing in the universe capable of embarrassing me now.

“Anyone here ever heard of the train question?” I blurt out.

“You know, the train question,” I continue. “If you pull the lever, a mother and her son get smacked by a runaway train – if you don’t pull the lever, five random strangers get run over by the same train. Anyone know what I’m talking about? Anyone?”

At first, only a few people in the room start mumbling. Sure, they’ve heard of the train question. It’s just that no one has asked them anything philosophical since…ever. In this case, it’s the party’s host and his wife who chime in. Yes, they’ve got answers. She says pull the lever because only two people will die. He says, “Nope. Not pulling it. If I divert the train, I’ve directly killed five people.”

The room doesn’t know it yet, but they’re hooked.

Everyone is a philosopher.

That was three years ago. The night turned out better than expected. People’s shells were broken. Phones were put away. Conversations – real conversations – happened.

And that’s what it’s all about, right?

Anymore, we spend so much of our time talking about weather, about news stories, politics and television shows, we don’t talk about life anymore. We pay attention to what other people are saying, and we miss out on our own stories.

Just under the surface, we’ve all got a story.

And it’s probably more interesting than we assume.

Dusk approaches. I’m feeling a little fat after devouring a dinner of pasta and bread with my little one, the G Man. In truth, all the food inside me is a good thing. Like pretty much everyone else, I operate better with a full belly. In this case, a little extra full.

I’m sitting in my house. It’s a small suburban bachelor pad, all mediocre art and empty wine bottles. Tonight, my drink of choice is a Hook & Ladder pinot noir. It doesn’t have the most nuanced flavor, but I’m a fan nonetheless. Not all that long ago, my favorite bartender Sam suggested I try it, and I was sold from sip number one. Sam’s the type of human I really like. She serves a mean drink, carries conversations better than anyone, and served me cake at her kid’s birthday party.

We should all have a good bartender in our lives.

We should all have a Sam.

Sam’s bar, which we’ll call the M, is more or less my haunt. I’m not sure if people have haunts anymore, and I’m doubly unsure whether most people know what a haunt is. What I am sure of is that I spend a lot of time at the M.

I’m quite literally the guy whose name everyone knows.

The guy who helps other patrons with drink selections.

And the guy who’d prefer to dine at the bar with strangers than at a table with friends.

In my experience, plenty.

If we exclude the obnoxious types and people who are deadly serious about not being spoken to, we’re still left with a huge population of interesting bar-hopping strangers.

There’s the hopeful loner, awaiting someone, anyone, with whom to strike up a conversation.

There’s talkers, the types who will happily invade your conversation and let you invade theirs.

And we’ll find friendly couples, storytellers, broken-hearted romantics, and slightly-too-tipsy people. Most are willing to offer way too much information about their personal lives.

You just have to know how to spot them.

And so I shall.

At least two cocktails per chapter.

…to soften the senses and open doors long-shut.

‘Sequel’ to Reality is Best Served with Red Wine 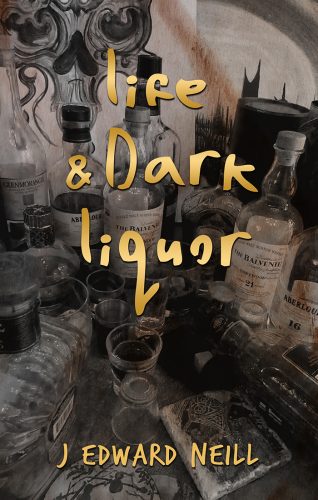 Having survived winter in the Chicago suburbs, J Edward Neill descends to Atlanta, where summers are mercilessly hot and every evening invites new adventures.

In the Deep South, he discovers new places, new friendships, and new cocktails.

Alternatively calm and stormy, exuberant and lonely, his latest bounce between bottles digs into the life of an ordinary author living in a strange and unpredictable world. Life and Dark Liquor is both a memoir and philosophical piece, ranging through topics both small and grandiose:

Holding on to relationships.

Marriage, divorce, and the hardest parts of being human.

No cocktail is spared.