Tapping Into My Inner Harley Quinn

Tapping Into My Inner Harley Quinn

Cosplay….if you’ve ever attended any sort of Con, you’ve heard this word.  If you know what it is, you most likely have your opinions on it and especially on those who throw themselves into the cosplay world.   What is cosplay?  Basically they took the words “costume” and “play” and turned it into a subgenre.  Folks who like to dress as specific characters that inspire them in some way, or make others laugh.  One of my favorite forms of cosplay is when someone takes two different characters and meshes them into one well-combined antithesis.  This photo I took at Dragoncon last year is one of my favorite examples. 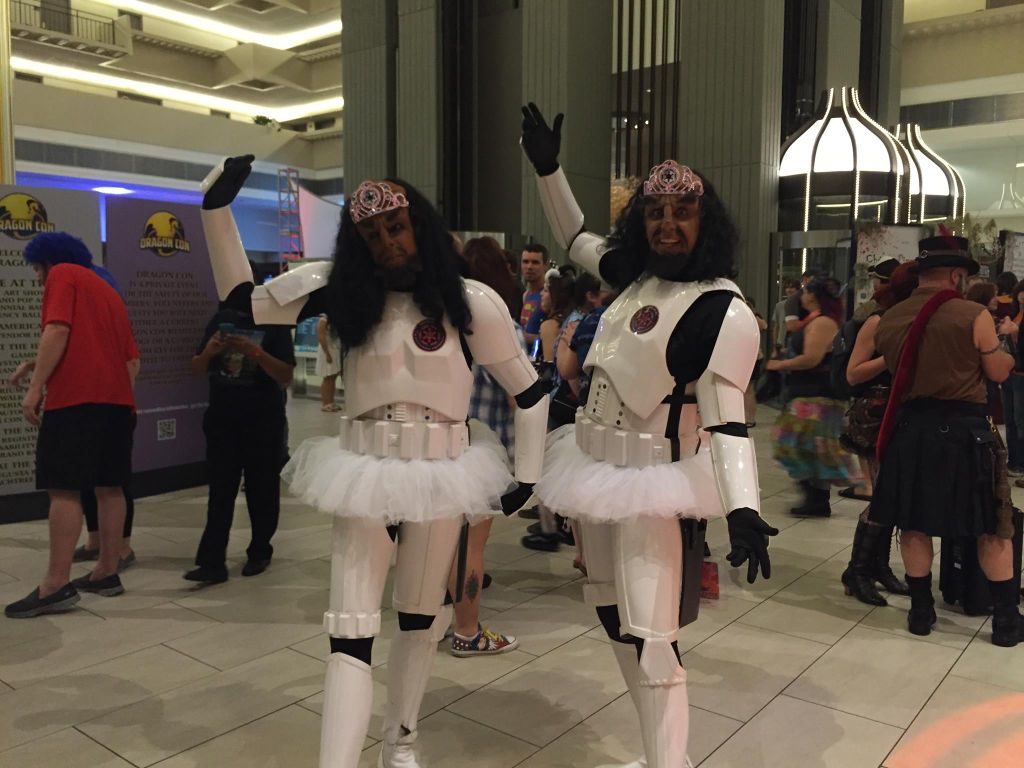 I’ve never really thought of myself as one of “those people,” someone who spend copious amounts of time crafting and putting together the perfect recreation.  But recently, I’ve decided to look at things in a new way, and change a lot of who I am.

In Atlanta, which is where I live, every Labor Day, close to 80,000 people descend on our already crowded streets to participate in Dragoncon.  Dragoncon is the second largest sci-fi convention in the US.  Every fan boy/girl can pay $80 for four days of hot sweaty geekiness.  During this time, you will be crowded into a hotel room – if you were so lucky to win that lottery.  Walk the hot Atlanta streets with wings hitting you in the face and swords poking into every orifice of your being.  Wait in line for hours to possibly make it into a room that is holding a panel of your favorite tv show.  Eat overpriced bad food.  Take in a drum circle.  Then party all night to roughly six am if you’re so inclined, get a couple of hours of sleep, and wake up to do it all over again the next day.  It is four days of geeky magic and I absolutely love it. 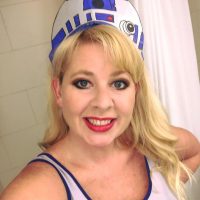 This year, I did things a little differently.  I actually cosplayed.  Now, I love to dress up for Halloween and have done so since birth, but I have never cosplayed before.  I belong to Metro Atlanta Geeks, and was going to be attending the con with my fellow MAG friends.  They cosplay and love it.

The last couple of months have been about doing things different from my norm, so I decided I’m going all in and have the full Dragoncon cosplay experience. 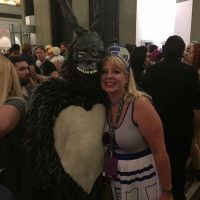 I’m blonde, and one of the major deciding factors for me with Halloween costumes is choosing a “blonde” character.  I HATE wearing wigs and refuse to do so.  So this past Halloween, I wanted to be Harley Quinn before the movie came out.  Of course there are many versions of Harley.  I’m a gamer, so when I saw the Harley from Arkham costume, I ordered it.  Some context about me, I’d been working on my weight for the past year, and though I had lost a lot at this point, when I got the costume, it was not enough.  So plan b.  Harley harlequin costume I found online that looked larger.  It came – same problem.  Plan c – purchase items and put together Harley from Suicide Squad.  This worked.  I found the shirt, chose a sexy skirt instead of her little red and blue hot pants, and no costume I wear is complete without my hooker boots.  Cool Halloween costume overall.  Sprayed the hair red and blue, made the “Goodnight” bat – the whole nine.  But it wasn’t perfect. 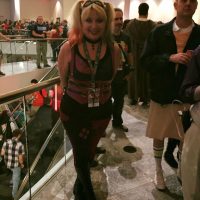 So skip ahead – Dragon Con.  Still working out almost daily.  I’m in process of moving to a new apartment (week before Dragon Con cause that’s smart) and I found my old costumes.  Not thinking they would fit, I tried them on – both fit perfectly!  I was very excited.  So I decided to ramp up my Halloween Suicide Squad Harley and get the hot pants and Puddin’ choker.  I was ready.  Each night, I would be a different Harley. 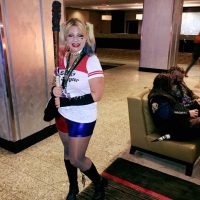 I arrived on Thursday night – which actually turns out to be one of the best Dragoncon nights.  Everyone is over the top excited and it’s not over crowded.  I had purchased a R2D2 dress from Amazon and handcrafted an R2D2 headpiece.  That’s the beauty of it – if you can build it save your money for other fun!  So I drew my headpiece on very heavy card stock I had left over from art school, wove a ribbon through it, and wa-la I had Thursday night’s costume covered.

Friday, Saturday, and Sunday were my Harley costumes.  Friday: Arkham Harley, Saturday: Suicide Squad, and Sunday: Sexy Harlequin Harley.   For each, I had my hair in pigtails, two nights with the black and red, and Suicide Squad with the blue and red.  I whitened my face, put on heavy dark black eye makeup, and of course, blood-red lipstick.  It was surreal.  People were coming up (guys mostly) and asking to take pictures – of me!  I posed with a million Jokers it seemed.  Deadpools seemed to really like me – we’ll look past the whole different franchise thing….  The best was the little kids that wanted to pose with me.  Adorable!  I have never experienced something like that before in my life.  It was fantastic.  I got to be a sexy villain and pose like I was a celebrity.  I don’t know that I’ve ever had that much fun.  Walking along the Atlanta streets decked out, swinging my “Goodnight” bat.  For a moment, you really are your character.  Thankfully, there were no store windows with any shiny purses that caught my eye! 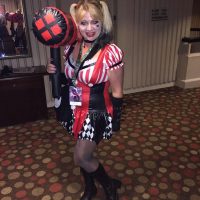 And yes, cosplay world, you won.  You got me.  Though I made fun of many of you who took it so seriously in the past, I am now addicted, and already trying to decide what blonde sexy characters I’m going to create for next Dragoncon.  I’ll keep ya posted!

Rebecca J. Bozarth is a the owner of Fotografia Film & Design in Atlanta, Georgia, where she is a web and graphic designer and photographer. She’s an artist, gamer, and film nerd, and loves fantasy, scoff, and horror.

Writer of comics and novels. In 2006 his first short story "The God That Failed" was published by Terminus Media in their debut comic Evolution Book 1. Since that time he has had stories published in Terminus Media's Evolution Book 2 and Evolution Special, Kenzer and Company's The Knights of the Dinner Table, and Four J Publishing's The Burner #3. Currently he is eagerly awaiting the digital publishing of his first creator-owned comic The Gilded Age #1 to be published online as well as his first novel The Dark That Follows later this year.
View all posts by John McGuire →
Tagged  cosplay, DragonCon, rebecca bozarth.
Bookmark the permalink.