The Day I Decided to Start Running

I remember one Friday.

A smoking hot Friday in the dead of July.

A hazy Friday.  A humid southeastern US Friday.  A Friday that promised to be hotter than Lucifer’s jockstrap.

Most Fridays like this one, I’d have been busy in my workshop painting. Or writing. Or mashing buttons on my Xbox controller.

But this Friday was my first truly free day in a long time. My son was away at summer camp. I didn’t have any plans. Any lunch dates. Any ideas. Somehow, someway, none of my borderline-alcoholic buddies had rung me up for a long afternoon of pounding scotch and making fun of my non-existent dating life.

In short, I had no effing idea what to do.

I guess maybe I should’ve known it was going to be a different sort of day.  I’d woken early – long before the crack of dawn. And I never wake up early. Bright-eyed and bursting with directionless energy, I’d trotted outside my tiny apartment and breathed the already-warm air.

I’ve been locked up in here too long, I thought.

It’s time for something different.

Flashback to a few years prior. A ex-girl of mine, a marathon runner, had mentioned a trail she liked to run. “In Suwanee,” she’d said. “Beautiful, wooded trail. Eight miles one way.” Back then I’d never cared much about running. I mean, I worked out and all, but usually in my garage. Or my attic. Or in an overpriced, sweat-scented gym. It’s not that I didn’t like the outdoors, just that I’d never much cared for sprinting along smoking hot sidewalks in the brutal Atlanta heat.

It hit me then.

I’d no idea why, but the idea of running bounced into my thoughts.

I remembered what my ex-girl had said. No, not that time she said I was an ‘real sh*thead.’ I remembered something else. The trail she’d talked about. The Suwanee Greenway. The place runners go to run when they don’t want to pound pavement.

And I realized I lived in Suwanee now. I’d just moved there. Not two weeks prior.

I gotta find this trail.

When I get ideas into my head, I go overboard. It’s either a fault, a virtue, or maybe both. Like that time I started a foam-sword fight club behind my house. Or joined an MMA gym and pounded my hands against heavy bags every day until they bled. So now, as I realized I might live near this fabled Suwanee running trail, a new idea took shape:

I want to run.

I crashed into my computer like a breaking Pacific wave. My fingers moved like the wind, my search terms as sharp as seagulls’ beaks. ‘Suwanee Greenway running trail’ I hammered into the keyboard.

I’d had no idea. I was pretty much an idiot. Sitting outside my apartment door, not a hundred meters beyond the stand of pine trees behind my parking lot, sat the Suwanee Greenway trail. It’d been there all along.

In a flurry, I popped into my ugly orange sneakers, slid into an even uglier tank top and shorts, and sped out the door.

I’d never been a runner before. I liked to keep active, don’t get me wrong, but I’d never felt the urge to run. Not in the summer heat. Not in the woods. Not alone. There seemed no reason to run other than to feel my heart hammer against my ribs. To get shin splints. To hurt.

And then I found it. I found the Greenway. The fabled land of trees, creeks, and north Georgia swamps. 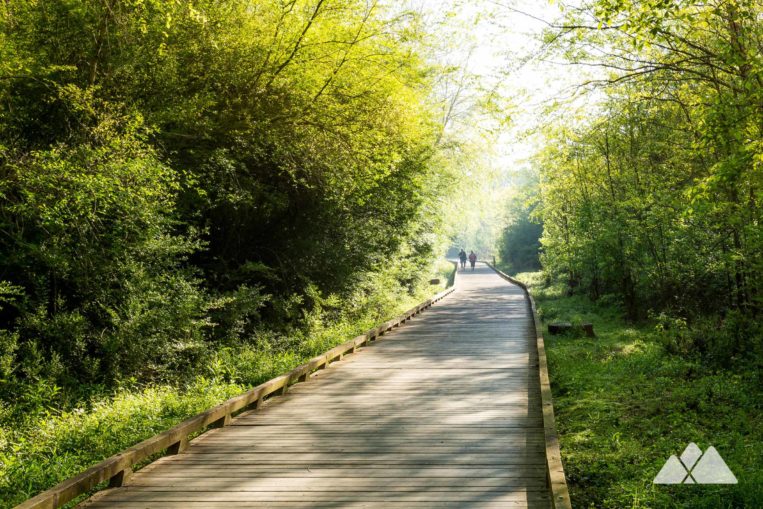 The Greenway. A few hundred yards beyond my door.

You know those disclaimers? The ones saying ‘Consult a doctor before beginning any new exercise routine?’ Nah. I don’t listen to ’em, either. My feet hit the trail and within moments I’d forgotten everything else about my week. About my plans. About my life.

Yeah, it was hot. And yeah, the humidity made me feel like I was a macaroni noodle tumbling in about-to-boil water. But I didn’t care. Suddenly, as if my sneakers had worked some strange magic, I felt the pendulum move inside me.

I want to be a runner.

I overdid it on that first fateful day. I ran six brutal miles in one direction, and walked six miles back. By the end, my breaths were ragged, tortured things. My calves were knotted up like old oak trees. My skin, which I’d forgotten to cover in sunscreen, sizzled the same as bacon in a cast iron skillet.

But I felt good.

No, not just good.

Let’s talk about the Greenway. It’s a place I wished I’d found a decade earlier, but was happy to discover when I did. They call it the Greenway because all eight miles hunker beneath the trees. In some spots, in the heavy shade beneath birch trees, the air is a full ten degrees cooler than in the sun. In others, the trail is almost dark even during midday, and the leaves so dense as to blot out the sun entirely. Parts of the trail are paved in wooden planks, and others with a softer-than-concrete asphalt/rubber hybrid. And in many places, the Greenway runs alongside creeks, small rivers, and a sopping wet marshland stocked with geese, ducks, bluegill, herons, and even the occasional beaver. 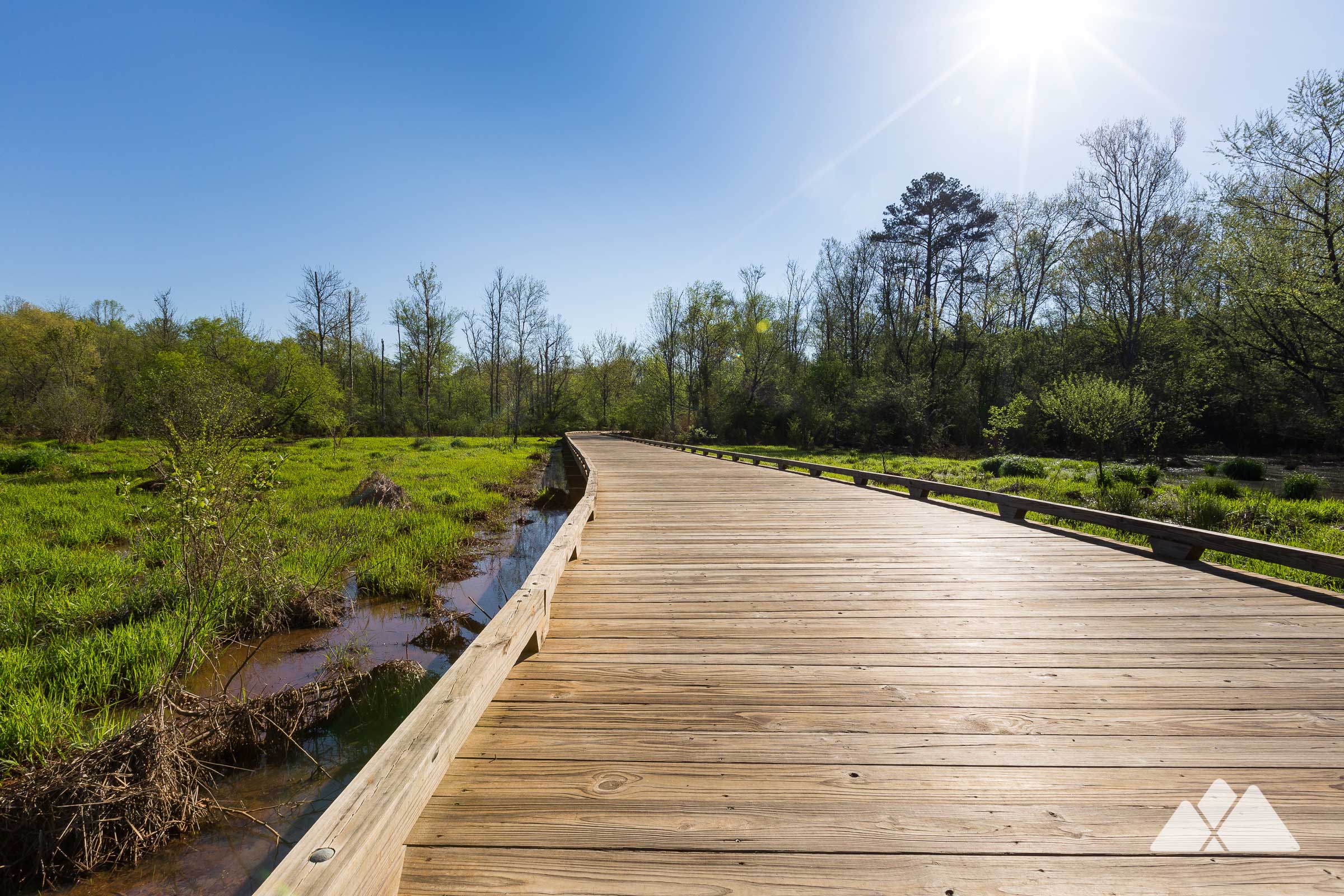 The Greenway – flanked by marshland on both sides.

Twelve miles later, I spilled back into my apartment. My body ached. I was cramped, hungry, thirsty, and tired. But I also felt sublime.  The ‘runner’s high’ my ex had talked about turned out to be a real thing. I felt as if I were floating among the clouds, my sneakers like Hermes’ winged shoes, my muscles singing with pain and pleasure.

Sure enough, not long after I finished my first run, a buddy called me. I rehydrated…and then spent the rest of the evening out on the town committing treason against my liver. I’m sure I didn’t once shut up about my experience on the trail. To my buddy’s credit, he just smiled and nodded.

On that day, something had changed.

It was as if I’d reached back into my childhood and stolen some of the freedom my ten-year old self once experienced.

Out there on the Greenway, I’d been in heaven. No phone. No bills to pay. Not a care in the world beyond the next place my ugly orange sneakers landed.

Since that day, and for the last four years, I’ve been out there running. I use the Greenway most days, but also a number of other nature trails. In autumn, when leaves blanket the ground and the wind begins to bite, I’m alone in a season of my own. In spring, when every bird in the universe descends onto the marshes, I run to their raucous music of their honks, quacks, and cheeps. Most times I keep moving fast. But some days I stroll along without a care. Some evenings, I’ve only got enough daylight for three little miles, while others I head out early to conquer the entire trail. I prefer to run when I’m alone, but on particularly pleasant days I’ll find other people running with me, walking their dogs, or wheeling their twin babies along in awesome bicycle/stroller hybrids (here’s to you, bicycle/stroller guy.)

The absolute best days are the first days of the Atlanta winter…just before twilight…when crickets, owls, and leaf-stomping squirrels surround me. No one else is on my trail. No one else exists in the entire world. It’s just me and the road ahead.

And I’m as close to Heaven as I’ll ever be.

I run, and I also drink wine.

Join me on my bounce between bottles right HERE.