It’s funny the things we decide to care about.

It’s curious the flow of socio-political liquid through the masses.

Do you ever wonder if, a thousand years ago, the hashtag causes would’ve been #SanitationMatters, #PeasantsMatter, or #ArrowsDon’tKill but #ArchersDo?

During World War II, if Twitter had existed, the Allies’ causes would’ve been obvious (Sadly the Axis’s would’ve been, too.) But what about during the American Revolution? Would it have been #IndependenceMatters, #RedcoatLivesMatterToo, or simply #FuckKingGeorge?

Nearly every day of our lives, we see someone or some group expelling causes across the internet. Seems everyone has an interest in telling everyone else what should be important. ‘You should care about this,’ they shout. ‘This is important, #TheseLivesMatter,’ but, ‘That shit over there doesn’t matter.’ These days anyone with fingers and a computer has a soapbox. Some folks choose not to stand on it. But a crap-ton of other people are happy to jump on and start talking/typing.

But talking ain’t the same as doing.

And while a hundred-thousand people might appear to agree with a common cause on their Facebook pages, ultimately they’re all just individuals. With their own lives and problems. Most of whom don’t actually give two shits about the cause beyond clicking ‘Like.’ 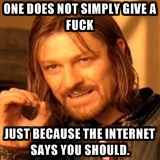 If a tree falls in the forest and no one’s there to hear it, did it make a sound?

If shit goes down and no one’s there to care, did that shit matter?

Every day globally, thousands of humans die. Some from sickness, others by accident, still others by war, suicide, and foul play. Every hour, people are wronged. People are robbed, kidnapped, assaulted, maimed, and abused. Now imagine all these terrible things if no one reported them. No news. No weather channel. No 60 Minutes specials. No hashtags made up to gather attention. Without media coverage, the only ones who’d know about localized suffering would be the survivors, the perpetrators, and a handful of observers.

Compared to the way things are now, the world would be quiet. It might even seem peaceful, even though it wouldn’t be.

Because…without the media storm surrounding the modern world, we’d never know about all these terrible things. Not even the good things. We’d never care. #NothingWouldMatter because we’d never hear about stuff. We’d be the same as most people were a few hundred years ago. The only things that would matter to us would be those affecting our village, our clique, our small sphere of stuff we could actually see, hear, and touch.

Now, I’m not going all nihilistic on you. To say #nothing has any value at all would be a tough sell to most people, especially those with children, lovers, amazing friends, close family, or even pets. However…if we peek just outside our bubble of people and things that matter, what’s out there? What’s really out there? Good stuff. Bad stuff. But mostly just stuff. Stuff that doesn’t affect you. Or me. Or anyone other than the people directly involved in it.

Pretend you and everyone you knew got really pissed off at how refugees in a faraway war were being treated, but none of you actually went out to fight the bad guys oppressing these refugees. So. Did the refugees matter to you? As in really?

Let’s say you actually did get up and fight the bad guys, but that one generation later, the refugees formed a country who started doing the same terrible things that had been done to them. Did your involvement matter?

If a city a hundred miles away vanished overnight and all its people were lost, but no one you knew had ever lived there, would it matter to you? Honestly?

What I’m saying is; for all the things a person really, really cares about in their life, they’ll fight like lions to defend. They’ll make huge sacrifices, they’ll go to war, they’ll spend all their money, they’ll invest their heart and soul. They’ll die to see it done. It’s that important. #ItMatters.

But for everything else, they’ll just go online and ‘Like’ it.

…or talk about it at the water cooler.

…or catch in on the news right before watching their favorite tv show.

We can only really care about the things closest to us.

And that’s just the way it should be.

Want to start a few hot debates with all the guys and gals in your life? Click here and here.

Want to sit in the shadows and read about people who have it way tougher? Right. Here.