The Reason Why – The Crossing

Along with Time Travel stories, Parallel Worlds are one of my favorite science fiction subjects. I think we all have had moments in our lives where we wish we could see the path not taken. Those What If moments can plague us if we aren’t careful. It’s very easy to believe you are in the Darkest Timeline if you look for the right (or better yet, the wrong signs). To find a way to peer beyond the veil of our world to see where things would end up. To know if we really did make the right choices. Or perhaps we were just scared.

The idea was that Robert Jeffrey and I would come together to co-write a comic book. So we each brainstormed some ideas and then met up to start breaking them down. Mine was a futuristic apocalyptic comic about surviving after the end of everything. A sort of Mad Max in space.

Really, that’s all it took for me to be on board with the premise. A sort of “you had me at parallel” moment.

You see, even before we’d ever met, the two of us shared a love of a television show that somehow managed to make 5 seasons across two networks: Sliders.

And yes, it was goofy at times, trying to come up with some random worlds that could possibly exist, running into your doubles (a fair amount), and just stumbling through the multiverse. 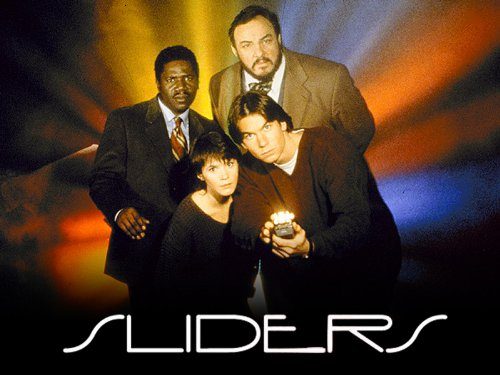 But… that idea is a good one. And our mutual love of those types of stories led us down the path to developing this story around a pair of fathers and daughters. An idea based around wanting to protect the ones you love, but not always being able to do everything that you can. We looked at it as asking a few fundamental questions:

How far would you go to save someone you loved?

How far would you go to get your loved one back?

How far would you go to prove yourself?

How far would you go with your lies?

We built everything from there. Assembling the building blocks to the point where we could get the amazing artist Sean Hill involved with the project. It was then about bringing all the love for the world jumping and wrap it in this grounded, human story. Luckily for us, 133art thought highly of it as well.

And while it is a little slow going with releases, it doesn’t mean we aren’t pushing things as much as we can. This is a story, I feel, that will be worth the wait.

Fugitive Dr. James Kincaid is running for his life. Years prior he was the most accomplished physicist in the realm of Crossing, but due to his own mistakes (professional and personal), he lost everything. Now, in a last-ditch effort to fix things Dr. Kincaid runs afoul of powerful US Senator Christopher John Rice. Kincaid steals Crossing tech and escapes into the multiverse. However, Sen. Rice will stop at nothing to get what he wants, so he enlists renowned Crossing physicist Jun Patton and FBI agent Kayla Cooke in a covert mission to hunt him down.

The first issue of the Crossing can be purchased here: 133art.

Writer of comics and novels. In 2006 his first short story "The God That Failed" was published by Terminus Media in their debut comic Evolution Book 1. Since that time he has had stories published in Terminus Media's Evolution Book 2 and Evolution Special, Kenzer and Company's The Knights of the Dinner Table, and Four J Publishing's The Burner #3. Currently he is eagerly awaiting the digital publishing of his first creator-owned comic The Gilded Age #1 to be published online as well as his first novel The Dark That Follows later this year.
View all posts by John McGuire →
Tagged  133art, John McGuire, Parallel Worlds, robert jeffrey ii, The Crossing.
Bookmark the permalink.