I have designed a “sustainability flag”. The rainbow symbolizes the diversity of the entire world regardless of, race, religious beliefs, nationalities, political standpoints, gender, and sexual orientation. We are all connected to the same planet, and hopefully everybody wants earth to be habitable for generations to come. 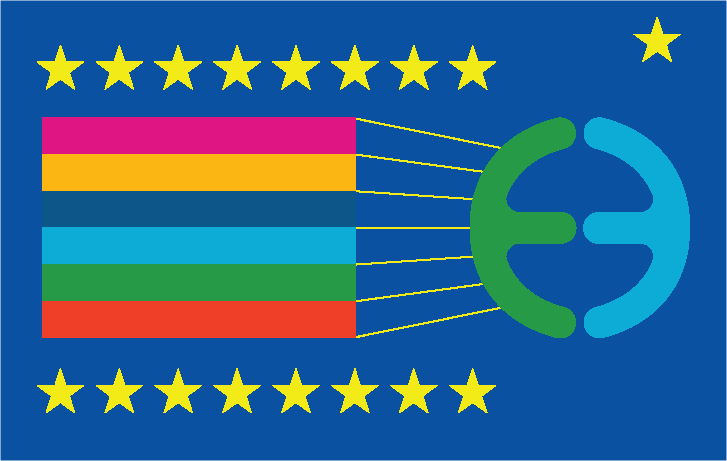 The colors of the rainbow resemble the colors in the 17 UN sustainable development goals, the SDG’s. The mirrored E’s are Earth, and stand for Equality, Environment, Eco-friendly, Energy, circular Economy. The green E is land and forest, the blue E water and air. There are 17 stars in the flag, which resembles the 17 UN SDG’s and the lone star in the upper right corner  is my guiding star, the 17th UN goal, and it is supposed to tie everything together, in knowledge-sharing and good governance named Partnership for the goals.

The journey Begins, firing up the Iron horse.

I can’t find the words to describe how it feels to fire up a motorcycle, jump on it, and twist the handlebar. If you haven’t tried it yet, I can only say the famous words “just do it”. The feeling of ramming toward an unknown horizon on a distant highway with a 1480cc 110HP twin engine pounding underneath you is exhilarating.

Pura vida is what comes to mind, not much in life beats that feeling. Now stop don’t give me the “giving birth and seeing your child for the first time” cliché, then you surely haven’t tried it. I have on the other hand done the seeing thing, but fair enough not the giving thing. Anyway, back to what really matters!

Yesterday was the first real day of my journey, me alone on a bike driving into the unknown, with the hot wind blasting against my skin, my nostrils filled with the smell of fresh cut grass mixed with a scent of manure , coming from the thousands of cattle, greasing alongside the road in the Uruguayan country side, I find myself almost alone out here, cars are far and in between, the same with the shattered villages I pass by. I am filled with sense of utterly freedom, And I scream it out but nobody listens , I don’t know if it’s my Viking blood that boils within me, or maybe I am just a curious gypsy, a nomad that become alive when facing adventures ahead.

I got a tattoo on my shoulder, it’s a Rune meaning “look into the horizon with an open mind, and hereby experience expanded consciousness” it really sums it up for me, always be curious and humble in you quest for knowledge, and never stop looking, never stop trying to better yourself, through the perspective of strangers. you will find is an abundant well of wisdom.

The good the bad(surprise) and the Ugly

The Good, I got my bike through customs quite painlessly, it took some time in the cargo warehouse at the airport, 2 hours to be precise, but it was really hassle free, the shipping agent and the customs handlers was extremely helpful. The shipping agent Oliver drove me to the airport, he helped me pick up some gas on the way, since the MC was drained, it would have been hazardous flying it here with a full tank of gas, he even paid for the gas at the service station, which by the way all have full service in Uruguay.

I find it kind of cool, since being a gas service station helper was my first job, literally 4 decades or more ago. People waiting fir their own shipments at the cargo warehouse, was very curious about the Harley and a bunch jumped in to help to unpack it.

The bad (surprise), when i unpacked the MC I realized that both tires were flat, especially the front tier was totally without air, i tell you a HD Softail heritage classic is VERY heavy on flat tires, impossible to push alone. I was wondering if it was something the shipping company in Miami would have done, to be able to fit the bike in the case, or maybe it was the change in pressure in the cargo room of the plane that had coursed it to lose all air?

On top of that the battery had died, when I turned the ignition key there was not a single spark, I was afraid the battery had gone bad, but then again it was brand new, and a good quality Lithium battery. Once more the wonderful Uruguayan people jumped in to help, I didn’t even ask for help, they realized the problems I was facing, and without asking they found jumper cables, together we got the bike charged and started up, but of course I couldn’t drive it anywhere on flats, without totally destroying the brand new tiers.

The resourceful truckdrivers arranged for a makeshift build wood ramp, that enabled me to slowly drive my bike up and into a van, luckily there was a side door that could slide open, remember I couldn’t turn off the bike, because the battery was dead, I had to let the engine run to power up the battery again. Here I was sitting on my Harley in the back of a van with the engine running, looking out of the sliding door gasping for fresh air, while hoping the driver didn’t drive to fast or hit a bad bump on the way to the gas station, I had a firm grip on the handlebar front break and both legs planted firmly on floor of the van, trying not to tilt.

We arrived safely to the gas station and wit a little muzzle and wriggle, got the HD out of the back of the van without anybody or anything got damaged. after that it was just a matter of pumping up the tiers, and off I went, of course not before I had given a huge thanks to the driver and shipping agent for helping out.

And the Ugly, Cheap perfume, my senses was challenged beyond, it’s everywhere in Montevideo the cheap chemically stinking perfume, the first experience with it was in the taxi from the airport, that’s not really a surprise, most taxi drivers now a days take baths in horrible cheap perfume, and that’s everywhere I guess.

When I arrived at the hostel and walked in to my private room, it hit me again this time thousand fold, the entire room stunk in the most nauseating manner, I couldn’t escape from it, the sheets were clean, but it must have been washed the cheapest possible detergent. I decided to unpack my sleeping bag and put some of my dirty laundry on top of the pillow, crawled into my sleeping bag and indulged with pleasure my head into my sweaty T-shirt.

I woke up with a pounding headache, and eyes I could hardly open. The stink evaporated from my room, after a full day and night with all windows open, but I never escaped the smell, everywhere I went it stuck to me, or that was the feeling I had anyways, because it was literally everywhere, the hand soap on the bathrooms, walking the damn streets, first I was wondering if it was a scent from the abundance of street trees , but I realized it wasn’t, it came seeping out from every house and store.

I don’t know if you can imagine how liberating it was to hit the highway and take in the fresh smell of grass and manure.