There’s no such thing as ‘indie’ 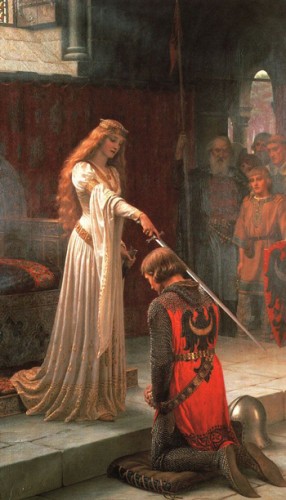 Be like this guy…and afterward stand up and take the damn sword.
The Accolade –
Neo-Gothic – Edmund Blair Leighton

Disclaimer: This article was written with artists, authors, and musicians in mind, but I think it applies to everyone…

Humility – A modest or low view of one’s importance; diffidence

Confidence – The feeling or belief that one can rely on something; especially one’s self

There’s a famous saying. It goes something like: “Confidence without humility is better known as arrogance. Yet humility without confidence will ever be viewed as cowardice.”

Ok. That’s not a real famous saying. I just made it up.

But it feels true.

Anymore, seems there are two sorts of people trolling the earth. On one hand you’ve got your Narcissists. Yeah. You know ’em. I’m convinced these folks don’t even know about their self-centeredness. Maybe when they were three years old, mommy and daddy didn’t teach them how to think; they taught the poor kid what to think. And now they’ve got it all figured out. They talk in absolutes, oblivious to the idea that their point-of-view is but one of billions. Narcissists are everywhere. We’ve seen them, heard them, bumped into them, and probably at one point or several during our lives, we’ve been them. It’s ok. No big deal. Kinda the world we live in now.

On the other hand, you’ve got your Humblists (Yeah, made that up, too.) This is the group we should care about. These are well-meaning people. They don’t assume they know everything. In fact, they’re fine with not knowing everything. Odds are, if you’ve read this far, you’re probably a Humblist. You think stuff. You know stuff. You do stuff. And yet somehow you’re pretty positive the world doesn’t revolve around you.

But perhaps, Lord and Lady Humblist, it should.

…once in a while.

The Little List of Artists’ ‘Humble‘ Habits I Want to Stop Seeing Forever:

Procrastination due to self-doubt. If you’re going to not do something, find a better reason than self-doubt. It’s miniature suicide. Every time you convince yourself you can’t do something, you kill 367 of your own brain cells…and 30 of everyone else’s, too.

Undervaluing your artistic work. First, I understand if artists want to pitch a one-time sale or freebie offer. That’s part of the bizniz. And I also understand artists who want to do it all for the love and never make a dime. That’s cool, too. But I’m talking about you, starving artist. Yeah…you. If you’re going to sell your stuff, sell it. Charge more than $0.99 for your f’ing awesome fantasy novel. Earn more than $50 on that amazing painting that took you three weeks to finish. If you’re in it to win it, tell discounting to suck your ____.  Charge what it’s worth, and not a penny less.

Posting crap tons of other authors’ quotes. Make up your own quotes. They’ll mean more to you…I promise.

The phrase self-published. Lose it. If you’re published in any form, you’re legit. Whether you blurted out a tiny lil’ book of poems via Amazon or you’re J.K. Rowling blasting our faces with more Harry Potter-ness, you’re the real deal. The words self-published sag beneath the suggestion that if you did it yourself, you’re somehow not legitimate. BS.

And finally…any reference to the word indie. Indie authors, musicians, painters, f’ing flag-football players. You’re not indie. You’re the real deal. If you’ve done anything in life, anything at all, you didn’t do it indie. You didn’t indie mow your lawn, did you? You didn’t indie cook dinner. Your work is just as valid as those getting paid to do it professionally. It might lack the polish or talent of well-marketed artists, but then again, it might be way fucking better.

I don’t know what else to say. I guess I’m done.

Like fun, quizzy, party books you can leave on your coffee table forever? Check this.