Recently I took a little vacation to the Gulf Coast of Florida.

In contrast to some of my lavish vacations of yesteryear, I did this one quick and cheap.

Which turned out just perfect.

This is my journal for four days and three nights in Palm Harbor, Florida.

On a sunny, warm morning, I drove my kid (the G Man) to his school. After releasing his groggy, five-year old self into the waiting arms of his cranky teacher (she always gives me stink-eye) I wandered back to my car. Decisions, decisions… I knew a 7-hour solo drive awaited me, and that if I didn’t get some exercise, I’d regret it. You see, my body rebels at long car drives. Without space to move around, my muscles tense up and everything starts to hurt. It’s pretty much the worst feeling ever. So instead of immediately settling in for the long drive to Florida, I went on a four-mile run.

It’s probably worth mentioning I never get to run in the mornings. And after Tuesday’s little sprint, I remembered why I love early running so much. It’s cool outside, usually mildly breezy, and in the deep woods of the Suwanee Greenway, I get to be alone under the trees. This particular run was especially wonderful. I mean…not having to instantly go to work afterward meant I got to stand under the leaves and breathe deep.

…and then drive  eight-and-a-half hours to Palm Harbor.

Some of the billboards seen on the way:

“Only Jesus can stop the Zombie Apocalypse!”

and my favorite pairing: 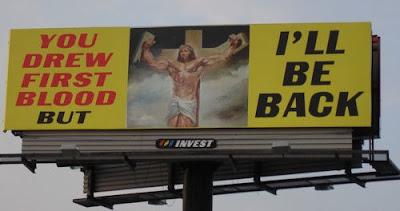 After a loooooong drive, during which I listened to the Mad Max – Fury Road soundtrack at least twice, I arrived in Palm Harbor at about 5:30 PM. I was half-starved, having consumed only a Muscle Milk and a Babe Ruth bar since breakfast. 🙁 Luckily, my buddy Danish Mike (more on him later) arrived from Fort Lauderdale at nearly the same time. We met for an early dinner, and the eating was on.

Now, the thing about restaurants in Florida is this: if they’re anywhere near the beach, they’re all the same. They look the same (weathered pastel paint and crumbling roof) their clientele is the same (tanned seniors) and the menu is pretty much the same (crab cakes and rum runners.) The place we chose was exactly like any other place we could’ve chosen. The food was cheap and hot, and the drinks were cheaper and cold.

I sat down with Danish Mike (think Arnold Schwarzenegger with a tan and long hair) and our buddy Greg (local musician and philosopher.) We slurped down about 4,000 calories each while catching up and planning a three-evening destruction of Palm Harbor. It was the perfect way to start a relaxing trip.

Oh, in case you wondered, Palm Harbor is a mostly residential town wedged between Tampa and Clearwater. It’s flat, crisscrossed with narrow waterways, and quiet. Not sure any of this matters. Just thought you should know.

So there’s this restaurant on the Gulf Coast of Florida. It’s in Clearwater, about 100 yards from the shore. Clear Sky Café – not quite a dive bar, not quite high end. It’s pretty much a mandatory go-to spot every time I’m in town. After rising early, Mike and I hopped in my truck, turned up some realllllly loud, obnoxious death metal, and sprinted down to grab some breakfast. We planned on a quick meal and then whatever, but naturally, as it always happens, we stayed at Clear Sky for about two hours. Nope, not chasing local girls. Nah, not drinking. Somehow we started talking politics.

And it turned out we did so in an ocean of hardcore Trump fans. Yay! 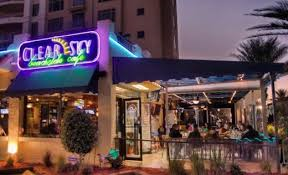 I suppose some people’s idea of relaxation is different than mine. Most of the people I know would define relaxation on the beach as: lying in the sand, wading in the ocean, reading by the pool, and generally chilling completely out.

Me and Danish Mike…not so much.

For about nine hours on Wednesday, we played volleyball, swam in the ocean, ate more food than an entire third-world nation, and…played more volleyball. Now, when I say we played volleyball all day, I don’t mean to imply we found eight random people to play five versus five. Nah. Not our style. We scoured four different beaches (and four different bars) to find some hardcore competition. We found and played against: an Italian woman and her Andre the Giant-sized Brazilian husband.  A group of super friendly weekend warriors. A beautiful South American girl and the overbearing guy trying to impress her. And a bunch of young dudes eager to destroy us. We played them all, and for the most part, we won….despite being sauced with rum & beer and playing with full bellies. 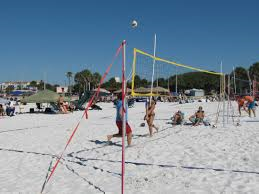 The Gulf Shore is home to (not kidding) thousands and thousands of volleyball courts.

Exhausted and covered in a pretty gross sunscreen/sand lather, we drove back into town, ate our sixth meal of the day, and collapsed. What a day!

It’s turns out Clear Sky Café isn’t the only good spot to get breakfast on the Gulf Coast. There’s also another chain called First Watch, a little family-friendly spot with tons of offbeat breakfast and brunch fare. After Wednesday’s high level of exercise and consumption, we decided to play it healthy. If you’re ever in the Palm Harbor, Tampa, or Clearwater area, I suggest First Watch. While it’s true most of the wait-staff is either high or realllly high, the food is fantastic.

Plus, I really like pancakes. Sue me. But theirs were amazing.

Our musician/philosopher friend, Greg West, had the perfect solution for our mid-Wednesday malaise. He suggested ocean kayaking, which…if you’ve never done it, is really a transcendent way to spend an afternoon. So it’s kayaking we went. We loaded up between three little islands (Holiday, Caladesi, and some other island I can’t remember.) It was just three dudes and a buttload of sunscreen out in the relatively shallow water between islands.

What’d we find out there in the beautiful blue water?

We came across a ship marooned on a sandbar. We speculated the ship’s captain must’ve been drunk as hell. The boat was pretty big, and yet somehow Cap’n Genius McIdiot managed to pilot it into two-feet deep water, where it’s been stuck ever since. The cool part: some pretty cool fish made a little reef out of the ship’s far side, and it’s there I plucked out a handful of beautiful shells to bring home to my kid.

We saw a shark (black – about 5′ – 7′ long) feasting on fish near a patch of stumpy mangroves.

We rowed within five feet of a dolphin pod. They didn’t mind us at all. We approached them calmly on our little kayaks and watched them jet through the shallows. Meanwhile, everyone on shore lost their minds. Based on their over-the-top screaming, I’m not sure any of the screaming teenage girls or drunken frat dudes had ever actually seen a dolphin before…or any wild animal…ever.

We spotted two manatees. They’re faster than you think.

Greg stepped on a crab, which bowed up at him as if to challenge him to a claw fight. Lacking claws, Greg backed down. A wise decision, we all agreed.

And then the tide rolled in. Somewhat reluctantly, we rode the rising waters back to shore and treated ourselves to beers and snowcones. Honestly, kayaking in the ocean was the most fun we’d had all trip. After proposing to our server, eating a buttload of fresh shrimp, and trying to force feed Greg in order to make him gain weight, we fled the islands and crept back onto the mainland.

So it’s true. A while back I committed to not watching any NFL football all season long. And yet…on Thursday, game one of the season (Panthers vs Broncos) happened to be playing on every TV everywhere. “Fine,” I thought. “We’ll watch it. Let’s go. Just don’t tell anyone.”

And so it went. A group of us (our clan had somehow swollen to five people) shambled over to a local Taco Mac-like spot to listen to Greg jam and to torment the waitresses. We watched Serena Williams lose badly, the US hockey team spank the EU team, and the Panthers blow a 10-point lead. Somehow we did this while barely drinking or spending any money. I think, being a local celebrity, Greg’s presence allowed us to camp out without emptying our wallets. It’s good to have friends, people. It’s even better to have friends who play guitar. Remember this.

In the middle of the football game, the bar fired up some trivia. We didn’t play (we should’ve; we’d have won easily) but we did witness one table cheat over and over again. You see, there were these five meatheads who busted out their phones for every question, and yet…somehow…didn’t win the trivia tourney. My theory is that if you’re gonna cheat, you’d better win. Just my two cents. Mediocre, meatheads. Mediocre.

Exhausted from rowing, waitress-tormenting, and talking about the end of the world, we retreated to sleep once again.

I suppose the hardest part of any vacation is dealing with the fact that at some point, it must end. This is doubly true for short trips, and triply true when a looooooong drive awaits at trip’s end. When I awoke Friday morning, I let out the world’s longest sigh. I wanted to go kayaking again, to play volleyball all day, and to go back to the bar with the rubber ducky racing lagoon. Yes, I’m serious. And yes, I’d picked the purple duck to win. And yes, he lost.

So after a quick breakfast, Danish Mike and I headed down to Clearwater Beach to fit in some last-minute volleyball. But it turned out our hearts just weren’t in it. We knew we couldn’t commit to a full day of fun, and so, much like pouty kids, we just lounged in the ocean and judged all the people walking by. It was pretty relaxing, at least until Captain Blonde Dude McWhatever hopped on his waverunner and tore off into the deeps at 500mph. I’m not afraid to admit we both wished his waverunner would explode.

We crawled out of the water. We listened to Greg play a few songs at the Rockaway (another bar filled with tanner-than-everyone seniors.) And we drank the nastiest pineapple juice ever.

And then, after a hug and a fist bump, we got in our vehicles and drove away.

There’s something about driving solo over long distances. After a while, it becomes a meditative experience. To pass the time, one tends to fall into one’s thoughts. For the first few hours, I listened to loud music and drove wayyyy too fast, but after a while I slowed it down. I dreamed up a few offbeat book plots, not unlike this and this.

But then I started thinking about new marketing strategies. You see, on the long stretch of road between Palm Harbor and Atlanta lies a string of quiet (and mostly dead) towns. And clustered around these towns are some of the most entertaining billboards I’ve ever seen. They range from simple and poorly-worded to straight-up weird.

I seriously need to invest in some of these billboards. Can you imagine, sitting between a thousand signs for pecans, adult toy shops, and Jesus, a huge banner for a crazy dark fantasy novel? 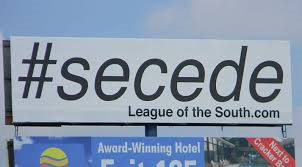 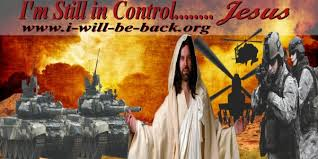 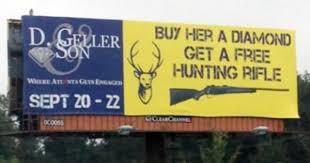 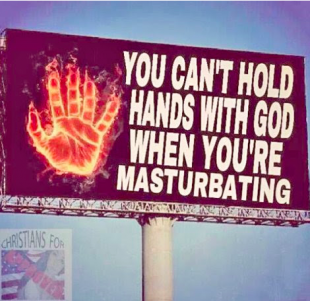 Exactly how a vacation should end.

I’m back home now. I’m listening to music on my couch and contemplating what flavor Ramen noodles to eat. As for my time in Florida, I loved it. I’ll not soon forget kayaking on the clear blue water, eating pancakes while discussing the end of humanity, and zombie-Jesus billboards.

These are the things vacations are made of.

Like Loading...
Tagged  Clearwater Beach, Fun in the Sun, Seven hour drive, Vacation Diary, What I talk about when I talk about.
Bookmark the permalink.