Why I gave up watching television

I just couldn’t do it anymore.

I had to walk away.

One way to murder your creativity is to spend all your time embracing other people’s creations.

And that’s just scratching the surface. 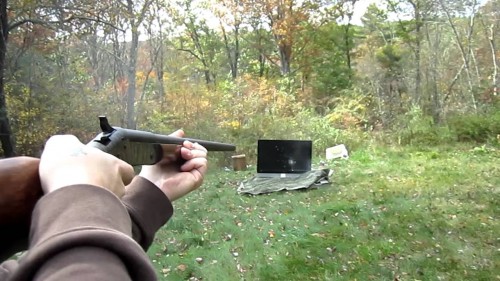 I can’t really remember when it started. Maybe when I moved out of my house as a teenager. Possibly even earlier. Some of the big shows of the early 90’s were stuff like Law and Order, The Simpsons, Full House, Martin, Coach, et cetera. There was nothing wrong with any of these. They were funny and engrossing, mostly. I watched plenty of them, and I enjoyed myself when I did.

But even back then, a thought process had begun to grow within me. It was subtle, but it was there. It itched, but not bad enough to apply any cream.

It went kinda like this: I begun noticing things about our culture. Small things. How people’s sense of humor seemed to start and end with whatever they’d seen on a little flashing box. How families set up their schedules in order to catch certain shows. How more and more channels sprang up, specialized channels, catering to every possible desire. How news and journalism felt engineered, not discovered.

Now this isn’t to say the shows themselves weren’t entertaining. Of course they were. Hell, The Simpsons is still funny (and Martin Lawrence still isn’t.) And yet it seemed every year more and more of each TV time-block became commercial time. An hour-long show was really only a 37-minute show. My friends’ conversations changed from being about the shows…to being about the funny new commercial, the hot new car, or the news clips they’d caught only a few seconds of but wanted to discuss as if they’d actually been on the scene.

I still watched TV, but less and less. It wasn’t really a conscious decision. It was more like I wandered off. Like I’d forgotten.

And then I got married.

And TV came back into my life.

I can’t remember how that happened either. The TV coming back…or the getting married thing. Whatever. If there was a part of me that rebelled against watching TV, it got shoved aside. Suddenly I was watching game shows, sitcoms, Seinfeld, and some show about six douchebags I’d probably murder if they were my Friends. It wasn’t the wife’s fault. She was just doing what most Americans did: go to work, get home, and flip the TV on until bedtime. No biggie.

Except I hated it. I didn’t even know I hated it, but I did.

During those years, I didn’t paint much. I wrote books at a glacially slow pace. A full third of my conversations with everyone on the planet could be Kevin Baconed in two steps back to whatever show we’d mutually seen. My creativity felt stifled. My dreams were dulled. The situation wasn’t life-threatening, but even so. There was something about it that sucked. A small, dull suck. But definitely a suck.

And then one day I ‘forgot’ to pay the cable bill. The TV went off, and I awoke from a decade-long hibernation. At the time I didn’t put two and two together. I just felt…liberated. I didn’t know why. I guess I probably didn’t care. And when the wife ‘fixed’ the situation and got the TV back on, it stopped being a thing for me. Stopped dead. Shows I used to watch came on, and I walked out of the room. I heard laugh-tracks in the background, but I tuned them out. Entire wars in the Mideast came and went, and I missed the newsfeeds entirely. I’m sure this probably contributed to friction with the wife; after all, TV time had once been together time. But it didn’t matter. Not anymore. It was more than cold turkey. It was as if a surgeon had come into my bedroom one night, carved out the part of my brain that wanted anything to do with parking my ass on a couch for 2-3 hours every night and not creating, and left without billing me. 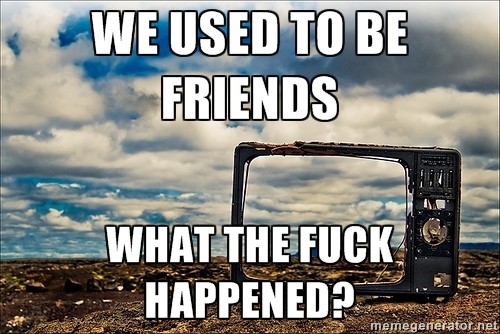 Now it’s true this little renaissance came with its share of problems. Friends I used to talk to would start chatting about TV, and a voice inside me would say, “If you say one more thing about American Idol or Bones, I’ll kill you and all your offspring.” Coworkers I liked would hit me up for my opinions on world news, and the first thing I’d think was, “When can I slap the shit out of you?” And naturally, whenever any TV would flicker on anywhere, I’d have to check myself so as not to judge the people watching it. It wasn’t easy. I suddenly had this asshole living inside my mind who thought judgy, nasty things about totally normal people. I didn’t like this asshole. But it’s clear he wasn’t going anywhere.

And so there I was, partnered with a huge inner-jerk. Sometimes I resisted him. Other times I’d completely give up on friends because of their talking-about-TV habits. And I get it; that’s not cool. But it’s what happened. I’d shut down whenever people talked about their fav show. Or when they talked about their TiVo lineup. Or programming their DVR. And after my divorce, I’d immediately rule out any girl who mentioned ‘Netflix binging’ as an acceptable date-night. (Actually, I still stick to this rule.) Harsh, right? But like I said, the asshole wasn’t leaving. He and I had to coexist. No getting around it.

During all of this, my last island of TV-interest lay in sports. Specifically baseball, hockey, and football. I still watched them once in a while, and I hated myself a little for doing it. Look, it’s true; I love me some Chicago Cubs, Blackhawks, and Bears. And for many years I justified watching them over sitcoms, reality TV, and news. “They’re different,” I convinced myself. “Sports aren’t like other shows.” “They’re real.”

But wait a second.

How does a 60-minute NFL football game take 3 hours and 15 minutes to watch?

How many commercials will I endure if I watch even half of my beloved baseball team’s 162-game schedule?

And why the fuck isn’t hockey on TV at all?

And now here I am. For the last two years, I haven’t had cable. Or satellite. Or Netflix. Or whatever the fuck Hulu is. I rarely even watch sports anymore. If there’s a huge event I have to see, I call a friend and go to the bar…and usually completely ignore the TV in favor of drinking Long Island ice teas or Balvenie 17. It’s utterly freeing. I’ve no urge to ever watch anything. I save hundreds of dollars and thousands of minutes every year. And let me tell you; my creativity has never been more alive. Removed from the electronic influence of other people’s humor, stories, and art, my imagination is free. The time I once spent watching TV is now spent creating. Hundreds of hours per year…reclaimed. Just. Like. That.

And better still, the inner-asshole is gone. Dead. Deceased. The only time I even remember him is when someone starts talking about The Walking Dead, a show approximately 900% of my friends adore.

Speaking of undead, here’s something WAY worse than zombies.

And speaking of ruthlessly invasive entertainment, here’s something WAY, WAY worse than TV.