Not so long ago, I lost my dreams.

Meaning; I stopped having them.

I think I know the reason why. But reasons aren’t always important. Instead I think I’ll catalog some of the ones I remember. For my sake. And hopefully for your entertainment.

A lot of people describe having falling dreams. I can’t remember ever having one of those. But I used to have falling ‘up’ dreams. As in I keep falling toward outer space. I don’t die out there in the stars. I just keep going. Trippy.

Remember the cool spherical submarine James Cameron took down into the ocean deeps? I dreamed that. Except the sub went way, way down. Not just the seven miles into the Marianas Trench, but a hundred miles deeper. I can’t really recall what I saw down there, but it was fascinating…and terrifying.

I once dreamed I met two men in Israel. They each offered me a different power, but the catch was I’d have to use it to help them do nefarious things. One power was to slow time for everyone else besides myself. The second was to become as heavy (in terms of weight) as I desired, while maintaining the same size. Both would make me unstoppable. I did bad things. I chose the weight power, then used it to steal the time power from the other guy. Oddly enough, this weird little dream inspired my new book, A Door Never Dreamed Of.

Ever seen the movie, The Fountain? Pretty good flick. I dreamed I was the dude in a space bubble, and I dreamed it fifty times, maybe more. I was utterly alone, forever floating. I was immortal. It was kinda cool, and supremely lonely.

I had a baaaaad nightmare when I was eight. My recently departed grandfather visited me, only he was rotting, eyeless, and nasty. His guts were hanging out. He looked like the dude from the old Metallica video, The Unforgiven. Yikes.

Less a dream and more an observation. I’ve never heard music of any kind during any dream I’ve ever had. Is that unusual? Do you guys hear tunes while you sleep?

I used to have a specific night terror as a boy, then later as a teenager (after several years of not having it.) In the nightmare, a skeletal shadow hovered over me as I slept. It woke me, whispered horrible things to me, and promised one day it would destroy me. Not just my body, but my soul. I decided later in life to make this critter the bad guy in my way-too-F’n-long fantasy series, and haven’t had the nightmare since. Hmmmm…

I had a recurring dream about a genie in a bottle. No…not the Christina Aguilera song. The genie asked me what my one wish was. (It was BS I didn’t get three.) My answer was always the same: The Power of Persuasion. Meaning anything I suggested to any person, they listened to. It was the ultimate Jedi mind trick. Sometimes I used the power for good. Sometimes just to get laid. Other times I took over the entire planet, upon which I established a seriously dark, tyrannical empire. Fun!

First dream I remember having: I’m in a car driving down a long road I’ve been down before, but can’t remember where it is in real life. Graveyards sleep on either side of the car. It’s not scary at all. There’s someone singing to me in the front seat. It’s soothing, but kinda dark.

The worst nightmare I’ve ever had (worse than rotting grandpa and shadow demon) was definitely this: I’m relaxing in my childhood bedroom. I have earphones on, but no music is playing. I’m at peace, but suddenly every single light in the world starts going out. I can sense the lights dying one by one. And then the outage comes to my house. It’s slow. It’s agonizing. And when the last light dies (a lamp beside my bed) I expire.

I dreamed this one almost exactly as I ended up writing it. I’m a boy at a zoo for aliens. I’m with my family. Everything seems fine, until it doesn’t. If you care, the story is here.

Ever played the game Metroid? Basically it’s a story about a woman alone on a planet full of things that want to kill her. For almost a year, I had a similar dream. Earth needs me to go to this weird planet and blow it up. No one can go with me. After training, I land on this eerie place and wander into some caves. Sadly I never get to finish. I like to think I completed my mission. Guess I’ll never know.

In a completely non-sexual way, I had a recurring dream about a red-haired woman. She was like my sister or something, and I was completely obligated to follow her around, protect her, and to not under any circumstances fall in love with her. All of this I did in a medieval setting. No modern conveniences at all. The girl later became part of the inspiration for the heroine (Andelusia) in my dark fiction series. 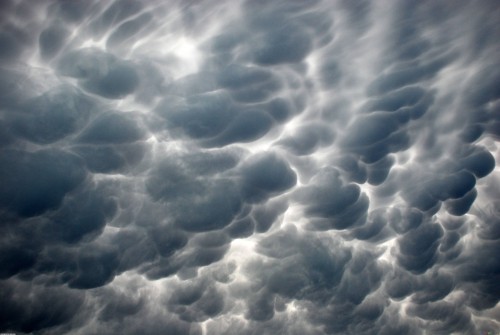 In one of my favorite dreams, I soar through clouds that look much like these. I’m utterly free, no cares in the world. I like to think we’d all love this dream.

I dreamed once, maybe twice, of a great, dark city. The city was newly-made, shiny and black. It wasn’t really modern, but nor was it from the old world. The city lay on a black shore upon which oil instead of water washed up in waves. I wandered the city for years. And found no one. So I painted it here.

Had a dream that the Russian government asked me to end a war. All I had to do was assassinate the president of their rival nation. I did terrible things in this dream, but perhaps the saving grace is that I never got to the end. The Russians didn’t win, and I always had the sense that they were the bad guys to begin with. (Disclaimer: I don’t believe this in real-life.)

I used to have persistent (and weird) dreams of being Lucifer from Paradise Lost. I fight God, lose, and fall. Except Hell in my dreams isn’t scary or hot. It’s peaceful, albeit cold.

Ok. Yes. I’ve had the typical I’m the best NFL quarterback in the world dream. I mean…it’s been a while. Forgive me, ok?

This one sounds like a nightmare, but it never really was. As a ghost, I wandered the world for hundreds of years after my death. I couldn’t touch or really affect anything. I figure I should’ve been lonely, but somehow I wasn’t. It was kinda interesting observing how humanity evolved. I only wish I could’ve remembered all the cool tech I dreamed up. 🙂

The last dream I remember having before my dreams stopped: walking through the rain on a forested mountainside. So very peaceful. If that was the last one I ever have, I’ll take it.

Here’s a book that wasn’t inspired by any dreams.

And here’s one almost entirely dream-made.