I passed by the magical/terrible 40 year mark this past weekend. The point in your life you are surely supposed to question all your decisions and really hold onto your regrets until they eat you up from the inside.

Oh, and buy a sports car, and go nuts in about 1 million other cliché ways.

Sadly, that sounds like a lot of work, and I don’t want to do all of that.

Instead I thought I’d provide some nuggets of information (whether you wanted it or not). A peering into some of the events, 40 of them, that put me in front of this computer typing at this exact moment on this exact night. 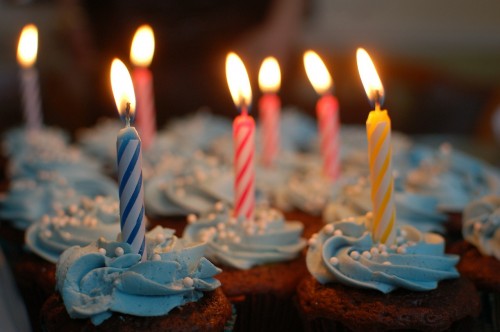 1 – From around the age 7 to the age of 11 I was sick every year on my birthday. For a while there I dreaded the day.

2 – At some point growing up my Mom baked me a strawberry birthday cake. 30 some years later and my wife still wonders if I might want to have a different cake this year (the answer is always NO).

3 – By the time I was in the 8th grade, I’d moved 6 times that I was old enough to really remember. I thought this was a ton of times… and it probably was, but when the teacher asked the class who had moved the most I raised my hand and said 6 thinking I’d “win”. Sadly, there was another person in the class who’d moved over 10 times (I’m guessing it was some sort of military family). That actually bummed me out (losing, not that they’d moved so much).

4 – One of my biggest What If moments will always be not making the 8th grade basketball team. At the time I didn’t understand it, and if I’m being really honest, I still don’t understand it. I still don’t know how it happened as I know I was one of the top 12 or so players in my class. There was some kind of weird point system the coach used over the course of the week tryouts and on Thursday morning I was in 1st place, and by Friday I wasn’t in the top 14. Thursday afternoon’s tryouts went poorly IF you were only looking at points scored. If you looked at blocks and rebounds (I played center), then even if I slipped in the standings a little, it shouldn’t have been by so much. Not making the team crushed me. And I think that not making the team put me at a disadvantage going into high school tryouts the next year (if only by having the extra practice time/game time).

5 – My parents had me when they were 19 years old. They had my brother 11 years after me. In between they divorced and then remarried about 10 years later. It is because of this that I believe Love never truly dies between people. It can be lost, but it is always there… waiting to be rediscovered.

6 – I started reading comics almost 30 years ago. I now own just under 10,000 comics. I don’t think I had any clue of what stories lay ahead of me when I walked into that convenience store and bought those first copies. 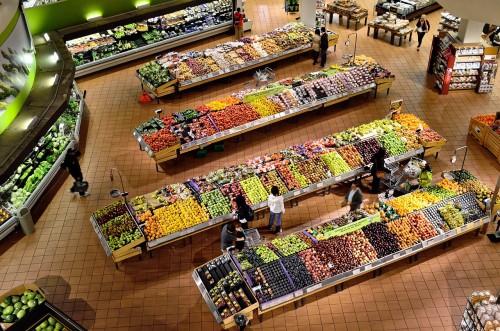 7 – The only reason I ever worked at Kroger was to get my parents off my back about getting an after-school job. It was literally the first and only place I went to. I had the interview that day and started the following week.

8 – Once I became a cashier at Kroger, I was often stuck on the Express Lane. And yes, I hated when people who had 50 items tried to check out through my lane (read the damn sign!).

9 – I met my wife while working at Kroger. Yes, we are high school sweethearts (awww).

10 – I was one of two baggers to win the bagging challenge at our Kroger and got paid to go participate in the district competition.

11 – I don’t drink alcohol (though I had a taste of some over the weekend… and by taste I literally mean 2 swallows). While some of my circle of friends did drink, my future wife couldn’t because of medicines she took, and other friends were effectively “Straight Edge” (and therefore didn’t do drugs or alcohol). So it really was a reverse sort of peer pressure that caused the decision.

12 – I had/have a Kermit the Frog hand puppet. Senior year of high school I brought it out in Computer Science class. The words “John, put the frog away.” might have been heard for the first time ever at Parkview High. 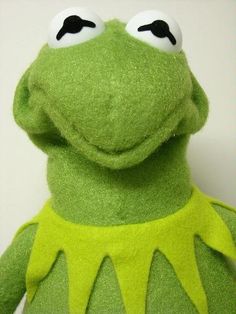 13 – In all of high school I only skipped class 1 time and only had detention 1 time. I was/am definitely a rule follower.

14 – I was a Jehovah’s Witness for much of my pre-college life. I have gone around at 9 in the morning on a Saturday and knocked on doors. I also didn’t want to be awake if that’s any consolation.

15 – When I started college I tried to keep my high school “after school job” at Kroger. However, they wouldn’t allow me to have 2 to 3 weeks off to get settled in. So I was “forced” to quit. Not really sure why I thought keeping that job was a good idea at the time since it would have required me driving back and forth from school.

16 – I was a DJ in college for my freshman year. But I don’t mean in the club. I worked a couple of shifts at the Ga Tech radio station where I learned that lots of the stuff we played was not very good. But the ones I liked, those got played every chance I could.

17 – I maintain I was screwed out of housing my senior year at Georgia Tech. When you co-op, you’re not taking classes and so are a little out of sorts with campus life. This is less noticeable during the winter months (I co-op’d Winter and Summer quarters), but during summer it truly hits home. In an attempt to be aware of the due dates for the various payments needed for classes and housing, I called at the beginning of summer to find out the due dates. Wrote them down in my planner. And when the time came, called up to pay for school… and was told I’d missed the deadline by a week or so. I wrote down what they’d told me. Tried to be responsible, and still got hosed.

18 – I have had the distinct pleasure of walking in on college roommates while they were… being intimate with their girlfriends… twice.

19 – My landlord (after the Georgia Tech housing SNAFU) actually became my boss about 1 1/2 years after I moved in. He was a civil engineer as well.

20 – I am not good with tools. And while I can follow instructions when putting things together, there was a long time that I didn’t know what a Phillips Head screwdriver was (why don’t they just call it “the not flat one”?).

21 – I know absolutely nothing about cars either. Another one of those “guy” things where I just have to smile and nod and hope no one sees through my half-hearted smile and asks me a question about it.

22 – However, I do love sports. I can bond with my fellow guys over football, baseball, or basketball. But never soccer.

23 – My one fear is probably heights. Luckily it is the one I don’t have to test all that often.

24 – I think I have a mild form of OCD. If I misplace something, I cannot focus on anything else until I find it. I can’t do anything else, and I certainly can’t go to sleep. 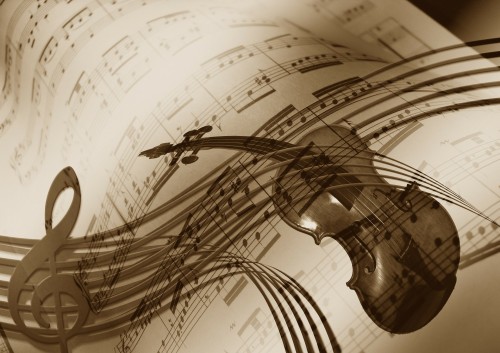 26 – I saw Limp Bizkit open for Korn prior to their big breakthrough. I’m still unsure at what moment it became uncool to listen to them. It still feels like one week they were cool(ish) and the next everyone had sworn they’d never liked them in the first place.

27 – I like a myriad of different music. If you were to search my iPod you’d find Slayer, Bryan Adams, Pearl Jam, Boys II Men, and the Misfits among many others. Though if I had to pick the music I listen to the most would either be Grunge or Nu Metal.

29 – I love stage magic. I love the idea that someone is trying to show you something which you know is not true and yet you want to be true. And I hate the fact that when you know how the trick is done, a piece of that hope is dashed.

30 – I’m not always the best friend I could be. I don’t always pick up the phone to call someone else, but instead wait for them to call me.

31 – However, I’d like to think that when the shit hits the fan, I’m the person you want beside you. At least, I hope that’s true.

32 – In the last year I have fallen back in love with watching wrestling. I blame my nephew.

33 – I started wearing glasses in the 3rd grade. However, in those first weeks I would forget them at home and my Step Father would have to bring them to me. After I finished writing “I will not forget my glasses at home any more.” about 500 times, I stopped leaving them behind.

34 – After my senior year of high school my parents moved to Richmond, Virginia. But since I was going to go to Georgia Tech and the house wasn’t sold, I effectively lived by myself for much of that summer.

35 – I am a Professional Engineer, which means that I have the ability to actually stamp plans saying they are good to be constructed. However, I have only stamped 1 set of plans so far (and I’ve had my stamp for about 10 years now).

36 – Before I started dating the girl who would eventually become my wife, I’d never been on a real date with a girl before.

38 – I am a sap. Give me a tear-jerker scene or anything with an animal dying and I will lose it (no, those aren’t tears, I just have dust in my eyes).

39 – I once saw The New Kids on the Block with a friend. No, we were not being ironic. He had an extra ticket, for some reason, and I said I’d go (must have hit my head). I remember the squealing of the teenage girls more than any of the music they played.

40 – My all-time favorite concert was Pearl Jam at the Fox Theater April 3, 1994 (the one they broadcast). Sadly, I didn’t get to see those whole show as we left when the house lights came on not realizing they were going to play one more song that way. Since then I stay a little longer than I probably should at shows to ensure such a thing never happens again.

Writer of comics and novels. In 2006 his first short story "The God That Failed" was published by Terminus Media in their debut comic Evolution Book 1. Since that time he has had stories published in Terminus Media's Evolution Book 2 and Evolution Special, Kenzer and Company's The Knights of the Dinner Table, and Four J Publishing's The Burner #3. Currently he is eagerly awaiting the digital publishing of his first creator-owned comic The Gilded Age #1 to be published online as well as his first novel The Dark That Follows later this year.
View all posts by John McGuire →
Tagged  40 things, Georgia Tech, John McGuire, Kroger, pearl jam, What if.
Bookmark the permalink.