There are three ways I pick out the RPG Kickstarters that I intend to cover:

This week, it’s fan review and there are some excellent games to check out!

“A new version of the Iron Edda RPG, powered by Fate Accelerated™.

Ragnarok is here! The Dwarven Destroyers bear down on your holdfast. A cult dedicated to Loki foments deadly mischief within your walls. The local seer envisions young warriors throwing off clan ties, merging with the spirits of giants to save their holdfast. Fight, bleed, sacrifice, and save your people for as long as you can. Welcome to Iron Edda Accelerated!

Backers get access to the Early Release version of the rules (edited but not laid out) as soon as they back this campaign.

Iron Edda Accelerated is a roleplaying game about the heroes of a Viking holdfast during Ragnarok. They battle threats from outside and within for honor, glory, and clan. The game draws strongly from Norse mythology — although its focus on holdfasts allows for telling a variety of stories:

The Dwarves of Svartalfheim invade the surface with metal machines, monstrous and terrible. The gods fight against the end of existence. Holdfasts burn. The seers foretell the coming of the Bonebonded: young folk who’ve thrown clan aside to merge with the spirits of deceased giants, providing the power to retaliate against the Dwarves in the form of skeletal giants. The Runescribed use their terrible powers to keep everyone alive a little longer. Other holdfasts seek any advantage in these desperate times. The world hurtles toward a chaotic ending, while a smiling Loki sits in the shadows watching Yggdrasil burn. What will your story be during the end times?

Iron Edda Accelerated invites a wide variety of stories against the backdrop of Ragnarok. The Holdfast Creation system lets you take the elements presented, ask questions about the holdfast, and uncover the rest through play. While answering those questions you also draw a map of your holdfast, providing a visual representation of your experiences. The map functions as a play aid and reminder of your holdfast’s environs, the problems arrayed against you, and the places you’ve decided are important.

Iron Edda Accelerated explores the problems of an oncoming apocalypse against a backdrop of mythic storytelling and Norse culture where clan is thicker than blood. The heroes of the holdfast feel pressure from everywhere as they solve the problems assaulting the holdfast.

“Necrotopia is a pen and paper role-playing game. We are releasing a complete 30 page color rule-set book with original artwork. #RPG

Necrotopia is an Apocalyptic RPG where you and your friends battle through multiple Apocalypses. Faced with invasion of evil forces through portals, travel across worlds after you master use of portals. Original story and art with unique characters and settings.

Uses a D6 game system with move creation that is simple and highly customizable. Create a character in 5 minutes and play a session within an hour. Fun for veteran RPG players and new players.

Necrotopia is a role playing game written and developed by Keenan Dunham. This is an independent project of a combination of ideas and stories Keenan has created. Our goal is to release the first 30 page stand alone rule-set book, and expand the Necrotopia Universe after that with more campaign books.

With the limited time-frame of the first kickstarter we will only be releasing the 30 page rule-set book along with some special bonuses. Artists are being paid up front for original art used, not from promises of future money.  Some art used is public domain.

The game itself is meant to be a beginners pen and paper role-playing game that can appeal to anyone. It is simple and highly customizable. Here is a sample of the story from book one: “Necrotopia’s story begins with sparks of an invasion of demonic and inter-dimensional forces attacking Earth, initiating a battle for survival and conquest. There is a battle between Heaven and Hell brewing and you and your friends are caught in the middle. What happens depends on you with one person taking the role of Game Maestro and the rest taking the roles of role playing characters.” We hope you and your friends have a ton of fun with this game!

Keenan Dunham is the writer and creator of Necrotopia: Handbook to the Apocalypse. The idea actually came from a book he was planning to write and the game will include many characters from those ideas. The book may get written if Necrotopia is successful. Other writing projects Keenan was working on got merged all into a greater world of Necrotopia, and it makes for a lot of fun. Expect a growing universe of characters and places to come. Thank you!”

I covered the first run of this Kickstarter here. In the new iteration, it has a higher goal and has raised more dollars towards it.

Check out the Kickstarter page. I didn’t copy it, but the pages shares a lot about the game’s mechanics so you can find out exactly what you’re getting with your pledge.

“Bronze-Age Sword and Sorcery roleplaying, inspired by TORAH and ILLIAD, GILGAMESH and ACHILLES, CONAN and THE DYING EARTH.

Joshua A.C. Newman’s The Bloody-Handed Name of Bronze is a tabletop roleplaying game of those who speak the secret Language of Names that spoke the world into existence. When you portray one such Namedealer, you will make treaties with anything bearing a name — and you will thrive and suffer from the consequences of those promises.

…And it is a game of fated heroes, driven by their long-dead ancestors — and their own great passions — to pursue their destiny for the benefit of the dead, and to die bathed in glory.

It is a game of passions and cunning, of tricksters and hard-found justice.

It is a game about flight from the consequences of your promises, and the power that comes from both lies and the truth.

It is a game about charging toward that against which you have been commanded, and the power one has to turn against an abuser.

The World of Names

Above the World is the Vault of Heaven, holding back the Waters of Heaven.

Beneath the World flow the Waters of the Underworld.

Between them is the World, and all in it is made of clay, given being with names, spoken into existence with the first breath.

All that has a name, has a will. Every child, every river, every constellation, every fang of bronze discovered in the rib cage of a storm-revealed skeleton, scoured by the desert. Seek and explore, for in the quest lies your destiny and your doom; your redemption and your failures. 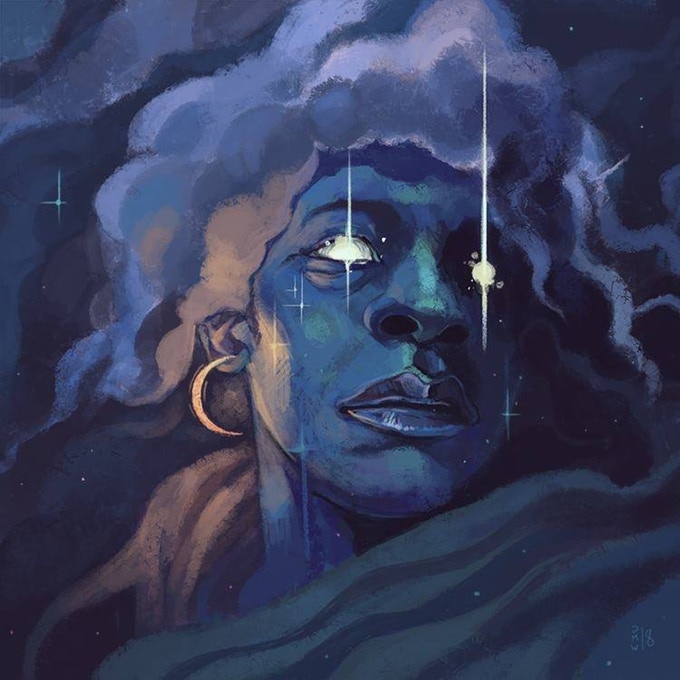 Jabari Weathers – Not art from the game but a great example of Jabari’s work.

The game sounds interesting as an experiment. The Kickstarter is intimidating, meant to show its artistry and poetry to give a solid feel for the setting (I feel I get the setting based on the imagery that is shared in the art and writing). Yet, the campaign keeps its mechanics shrouded in mystery. As best I can tell, you’ll draw from two pools and roll them together to accomplish your goal. If the fantasy of these previews can be infused through the book, this will be a winner.

Add to that, there’s Jabari Weathers art! I met Jabari online, loved their art, and, ran into them at Gen Con 2018 twice (we happened to be in the same hotel). Jabari is an exceeding friendly individual and I wished I’d had time to sit in on one of their games at the convention. With this project, I’m eager to see all of Jabari’s work cause it will build this setting.

What are we doing here?

L’gat’s Tome of Amazing Creatures Volume 2 is the next release in a trilogy set of 5th Edition Dungeons and Dragons supplements. Produced by Power Up Gamers Roleplayers for Accessibility, artwork will be done by the talented Jon Pintar.

What’s in the book?

Much like the first volume, we plan on releasing 26 homebrewed and re-skinned monsters with rich lore, culture, and history sections, several tables including a d100 magic item roll table, and a section containing 12 locations with sights, sounds, and sensations specifically designed  to cater disabilities. Each Location will also have a trap, a puzzle and a riddle along with monsters from the series that might be found there.The Supplement will have a full color cover with black ink sketches of the monsters inside.”

This is “26 new, flavourful creatures for the fifth edition of Dungeons & Dragons, this time focusing on the fantastical non-hostile denizens of L’Gat’s Prime Material Plane.” So, you’re getting the nice creatures and you’ll need to see volume one for the bad folk. These are monsters by Disabled DM Jarin DND, who reached out, sent a press release, and has been very accommodating of my questions. One of the main ones I had was about the Writer’s Room Visit, a part of the $35 and up rewards that include PDFs of both volumes of L’gat’s Tome of Amazing Creatures and more. If you’re curious what the Writer’s Room Visit involves, Jarin from Power Up Games shared this:

“The Writer’s Room Visit is where our backers can sit down with our production team with an idea of their own and we will help them with the process of taking a basic idea and writing it out into a usable pdf format…of course with time being limited, we obviously can’t teach them all the ins and outs in one session but we will teach the basics of the process as well as give some guidance for resources etc. We currently plan on these sessions being between 2 and 8 hours per session depending on what the supporter needs.”

For $35 (or more), you’re getting 5e games, updates, and a chance to talk gaming ideas with individuals that have already taken the plunge and published their creations!

Over and above the gaming, PUG is on a worthwhile mission to create “ways of making their games more accessible to a wider variety of people, especially those with sensory impairments and learning disabilities. This is done by suggesting language and methods that evoke the senses as well as outright descriptions of the beasts and their habitats.” Their mission is inclusive and it’s done in a way that benefits all gamers – by offering more detailed monsters. This is product is going to be a win!