A Crap-Ton of Comedy for Twelve Bucks

A few months ago, I stumbled upon a true Atlanta gem.

There I was, sittin’ at my computer, when a message popped up from someone I hadn’t talked to in a while.

Not being a true beer aficionado, I was skeptical. The snob in me wanted to sip cocktails in a traditional comedy setting…whatever that is. And yet I was curious. The ad promised several hours of local and traveling comedy talent – usually 8-12 comics per night. It promised me a ton of Sweetwater beer, which…even though I’m not a beer nut, made me say, ‘hmmmmmmm.’ It even promised a souvenir pint glass, of which I just happen to collector.

“F**k,” I thought. “Twelve bucks for two-plus hours of comedy, six beer samples, and a pint glass? It’s too good to be true. Right?” 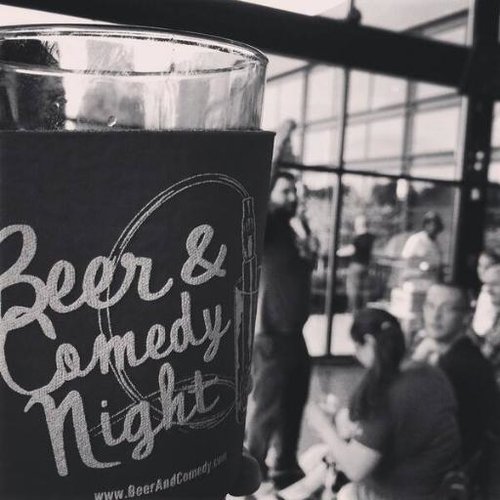 And so, on a cold winter’s night, after stuffing my belly with treats (and maybe one little Long Island) at Brookhaven hot spot Kaleidoscope, I hauled my skeptical self deeper into Atlanta. The rain pummeled my passage along the dark streets, and the cold crawled into my skin. At nearly 7PM, I shambled alone into Sweetwater Brewery, paid my twelve bucks, and hopped up the stairs into a wide-open bar.

I arrived early that night. Prime seating was mine for the taking. I wandered up to the huge L-shaped bar, ticket in hand (Each ticket has six punch-outs; each punch-out gets you a half-pint of beer) and I sampled a light but flavorful pineapple ale. Reminder: I wasn’t a beer nut, but I liked the pineapple ale so much I used half my ticket getting refills.

So there I was, all alone. I was probably the oldest person in the brewery, and definitely the only one who hadn’t brought a date. Both of those truths were just fine with me. People-watching was (and still is) among my favorite pastimes, and I’d always thrived on flying solo. After some thumpy music from local DJ Durrty Martinez (including a sing-along of 80’s cartoon show Duck Tales) the crowd quieted (slightly) as a shaggy dude in a weathered beanie took the stage.

And off we went.

Six half-pints (in truth, they gave me mostly three-quarter pours) of better than average beer.

My expectations had been pretty low. I’d figured for twelve dollars, I’d get some beer and ‘meh’ comedy. And while it was true some of the ten comedians were hit-or-miss, for the most part the crowd laughed their asses off. As the show ended, I snapped up my pint glass and wandered back into the rain. I felt like I’d just robbed a bank. One doesn’t get a ton of beer and quality comedy in Atlanta for $12. Most spots, I’d have dropped at least $50. 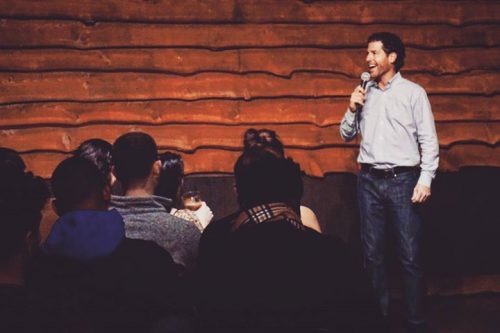 Ever since that first night, I’ve been hooked. I’ve gone to a dozen shows, and I’ve enjoyed them all. Friends I’ve invited felt likewise. While it’s true the crowd can get pretty loud at times, and also true a small fraction of the comedians aren’t quite ready for prime-time, it’s still worth twice the price of admission. The two hosts (Pettis and Mesi) are legit hilarious, and the talent keeps getting better. Local comedy goldmine Ron White has even been known to show up now and then…and it doesn’t hurt that he’s my favorite laugh-maker alive.

So there you have it.

In Atlanta on Monday? Cool…join me at Beer and Comedy. I’ll buy you a beer or two.

And when you get home from the show, do this.