I want to try something for the blog. I’m not 100% on how it is going to work, but… I like the idea of demystifying things. So how do you come up with the stories you write? Just like this: 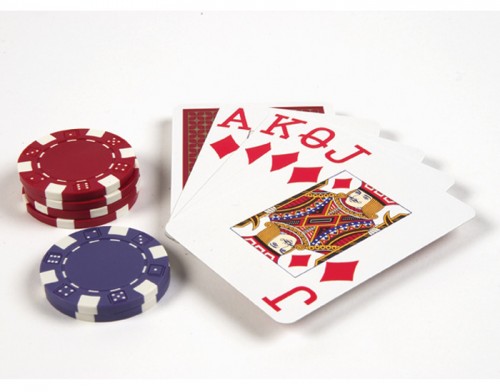 My wife and I play poker at one of the local restaurants nearly every Sunday evening. It works out well because it is something we are decent at and enjoy together. But I had a lot of time to think about Luck when a hand didn’t go my way (“Bad” Luck) and suddenly I was out of this week’s tournament. In my mind the fact that my opponent ended up winning the hand when (once we got all the chips in the middle) he only had about a 25 % chance to win tells me I had some bad luck in that hand.

Sometimes I wonder if I don’t just have bad luck in many other hands. But as many poker players (and more than one mathematician) would tell you, sometimes you are just in a bad stretch, but eventually things will regress back to the mean. Or to put it simply, things will average out. 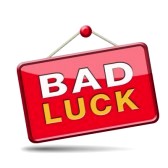 But let’s face facts, we remember the bad beats in cards and in life more than we remember the times when we got “lucky”. It is very easy to bemoan our fates when those negative thoughts keep coming up. When we know that the other shoe is bound to drop. We’re the types of people who when you say bad things happen in 3s, we are quick to point out items 4,5,& 6.

We compete to figure out who has it worse. We’ve all been in those conversations:

You – “Yeah, my car wouldn’t start today, so I ended up having to call in sick. And after repairs and everything I’m out $1000.”

Though, let’s be honest. I’m going to talk about some other instance of something bad happening to me today while I was at work, because I cannot concede defeat that easily, right?

It’s the same in stories. One of the ideas I’ve heard is when you are writing figure out what your character wants and then put an obstacle in front of them. So maybe they have to get across the state for some meeting of the minds which will solve all their problems… oops! your tire blew, and because you didn’t have a spare you missed the meeting and now the aliens are going to invade (or something). In a lot of ways it seems like Bad Luck is almost the thing that can keep your hero from winning their story.

But I think the other side maybe works too well. Sometimes it is too much good Luck running amuck. It’s gotta be believable. It’s gotta be something where you don’t scratch your head because the solution was not just impossible, but beyond lucky.

Star Wars – If you were a character who didn’t understand the Force, but knew the events that led to the destruction of the first Death Star, wouldn’t you think that Luke was literally the luckiest man alive? I mean he closed his eyes and took the shot. “One in a million, kid!” What a stroke of luck.

Of course, we the viewer, know the truth of the situation.

The Hobbit – Bard ends up hitting Smaug in the one spot where he is vulnerable. Yes, maybe he is just “that good”, but I know  when I read the Hobbit, that was my biggest problem with it. So one arrow fired by someone not in the main group was going to be the thing to end the evil of this dragon? How lucky!

So there is a fine line to walk. You must make it so that your character has to struggle a bit, perhaps they bemoan their fate (their Luck), but most of the time they are going to triumph in the end. Overcoming the odds.

Overcoming the odds… sounds like they got lucky to me.

Something else that puzzles me about luck… Is it possible that there is an amount of luck that each person has? Can it be measured? Is it like matter in that it cannot be created or destroy, but merely transformed?

There’s an 80s movie with Richard Dryfuss called Let it Ride (a personal guilty pleasure movie). In the film, he’s a compulsive gambler (horse racing in this instance). There’s a line in that movie that’s always stuck with me:

That’s a profound thought. What if we have some amount of luck which ebbs and flows on a daily basis? What if we could predict when those cycles were so that we only played poker or craps or blackjack on the days when our own personal luck meter (for lack of a better term) was in the positive rather than in the negative? Maybe that’s why there is something to be said for the idea behind “beginner’s luck.” Those are people who have not burned through their luck for a particular luck based game. So that first time they play… well, it’s like they can’t lose because they really can’t.

I have a friend who I have joked with over the years about his luck. I’ve seen it in action before to the point that it is now a matter of fact that it will happen. It’s like he has a super-power where he can manipulate the odds into something a bit more in his favor. And obviously it doesn’t work every time, but it works enough for me to notice. It works enough for me to wonder if there might not be something to it.

Here’s the key thing, he doesn’t waste it. When we play games of chance, he isn’t always winning. In fact, he probably wins at an average rate. What you might expect any person to win who plays Settlers every once in a while. Does he know what he’s doing? Does the Luck?

I think there is something to all of that. Could I steal someone else’s luck? What would that look like? How might you go about taking something like that? Is there such a thing as taking too much? I mean, if you reduce all their Good Luck and only leave the bad… well, they’d probably get hit by a random object from the sky (oh, and if you are going to do that, make sure that you are nowhere near them afterwards).

And this is how ideas begin to form. A bad beat in poker becomes something more… but where to go? This feels like there is something there. Buried underneath, waiting for a story to be told. The only question now is whether I can exhume it anytime soon. Or perhaps it is destined to be filed away for a while.