When last we left our intrepid heroes, they were cruising away from Juneau onto their next port of call with a mind full of dancing humpback whales and bald eagles everywhere.

Day 4 (Skagway) – This was the longest day at any port. Took a tour bus into the Yukon which meant going through the Canadian Border Patrol at Fraser, Canada. Now I say Fraser and you think “town” (well, maybe you think Cheers or even his spinoff), but what you should envision is about 3-4 houses, a border patrol building, and the train station where you can ride the train back into Skagway (which is what we did). Apparently you should not run to the bathroom on the bus when you are about to go through the passport check, the Canadians and Americans don’t seem to like this very much (luckily I did not have to experience any issues like that).

But we were warned both coming and going. And here I thought we were all hugs and kisses with our friends to the north.

In the Yukon (this is back in the 19th Century), listen I understand that there was a gold rush and all, but they had to institute a rule (the Canadian government did this) that in order to pass by the border to look for gold you had to have 1 TON of supplies with you (https://en.wikipedia.org/wiki/Chilkoot_Pass) because people just didn’t realize they had a good chance of just out-and-out dying. You know, no big deal.

I actually have a picture of the full list… 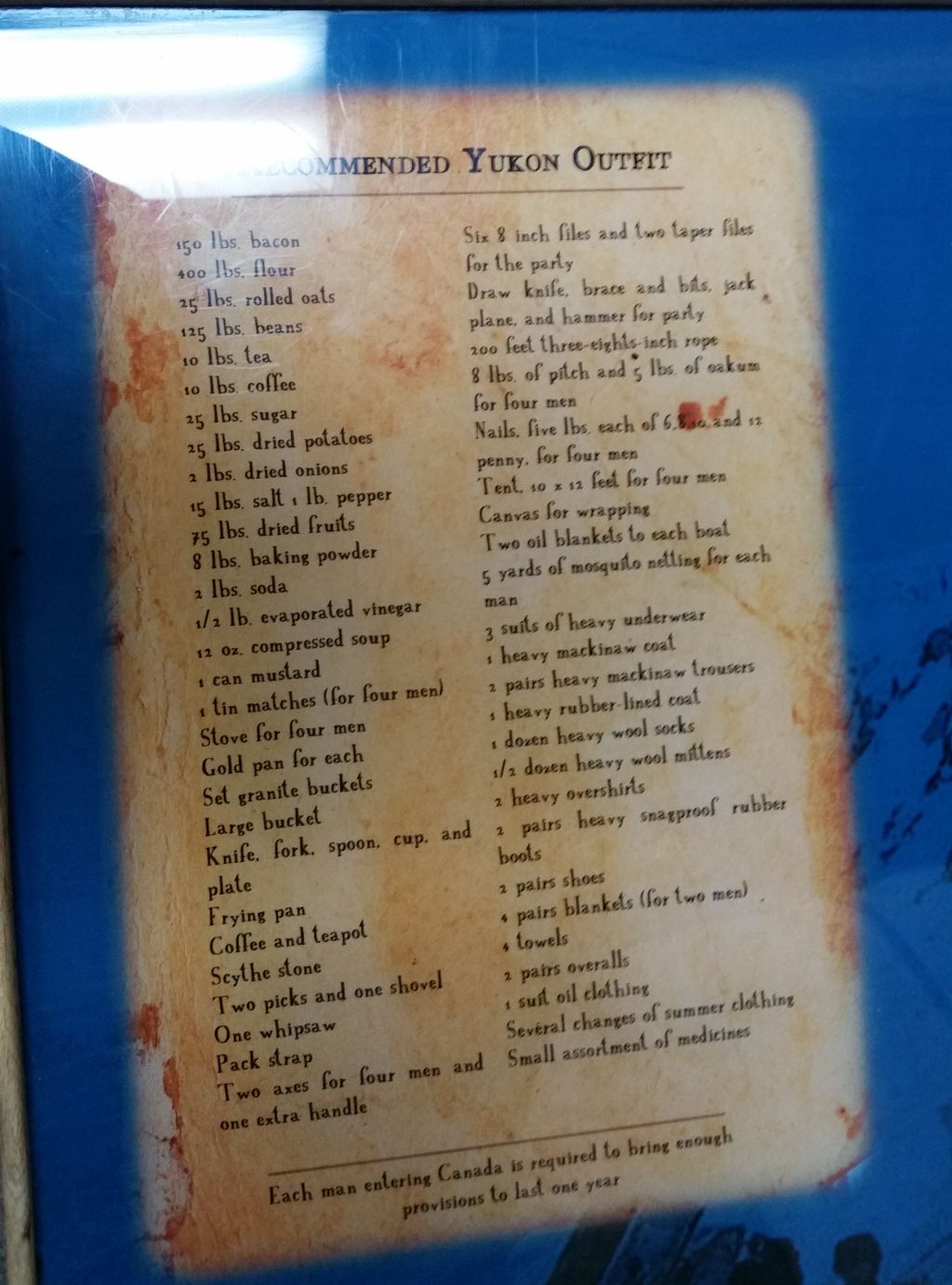 Sorry for the glare at the top.

The train ride back was very cool, but there is only 10 ft of “road” up there, so you really are on the edge of the cliff. Literally. The rail line was finished right after the gold rush was basically over, so it ended up not doing much good. (https://en.wikipedia.org/wiki/White_Pass_and_Yukon_Route) We also went to Carcross and Caribou Crossing in Canada which were effectively glorified touristy places, but definitely had that whole “in the middle of nowhere vibe going on. Even got to pet some sled dog puppies which was cool. I thought about the myriad of ways I could possibly stick one of those dogs under my jacket and get him back to the ship. And name him Buck.

Sadly, I did not go through with my plans.

Day 5 (Glacier Bay) – Woke up to a huge sheet of ice. It is amazing how big it is, how far it used to be only 100 years ago (noted from the explorers maps from that time). We hung out for over an hour taking pictures and just experiencing being there.

This along with portions of Skagway were what my mind had built up as Alaska, not the rainforests (how naive of me).

The rest of this day was really spent hanging out with my parents. It was effectively an “at sea” day, so you really have make sure to fit in Breakfast, 2nd Breakfast, Lunch, snack, dinner, and some late night 4th meal. It’s hard work.

Day 6 (Ketchican) – The rain capital of North America or something like that (I thought that’s what I read or heard). The town is right next to the port, and again is somewhat contained by roads that don’t lead to other places. We did a rainforest sanctuary and totem pole excursion, which helped to answer the age-old question:

The answer is yes, by the way. And they apparently like to do their business on the trail paths as well. You know, just to let you know they were out there (I did not take any pictures of those piles… you can use your imagination).

We didn’t see any of the black bears, but we were told by our tour guide that “they were more curious this year than normal”, which I’m not 100% on, but I’m pretty sure you don’t want to hear those words… ever.

Probably the highlight of this trip was when we got to see a bald eagle as up close as you could ask for (like 2 feet away) because he has an injured wing and is a permanent resident of their sanctuary. He just hung out, very much the superstar, probably thinking about freedom and how he’s so glad that the turkey didn’t get to be our national bird.

Day 7 (Victoria, British Columbia) – Very beautiful. From what the tour guide told us it effectively has a Mediterranean climate. Approximately 10 days of winter a year, but only about 10 days of summer as well. Sadly, we arrived at 6 PM and only had 5+ hours before the boat left, so while we opted for the city tour bus there was only so much time to see what we might have wanted to see (the bus tour is the way to go, but after 6 PM they don’t do the get on/get off aspect they do during the day). There is a castle in the middle of town (like in the middle of the neighborhoods) (https://thecastle.ca/).

And the history of that castle was crazy in that after it was build the Dad died and the children didn’t want to pay the land taxes on the place, so they tried to sell it, but NO ONE wanted to buy it. So they came up with a scheme where they’d put all the resident’s names in a hat and the winner would “get” the castle. And that person didn’t want it either.

At some point the City of Victoria bought it.

It was cold on the tour bus… might have been the coldest we’d been on the entire trip (temps were high 50s/low 60s for everywhere). By the way, packing for this kind of trip is not the easiest. You need a jacket or two (but not FIVE like my wife), but there were days that a hoodie was all I really needed. However, the reason Victoria was the coldest had less to do with the temperature and more to do with the fact we were on a double-decker bus, on the top-level, and it had rained earlier that day.

My wife opted not to sit in a wet seat and put her coat down. A few minutes into the drive she was freezing, but waited almost 30 minutes to put on the jacket due to not wanting to stand up while we were in motion.

Of all the times not to bring the heavy jacket… 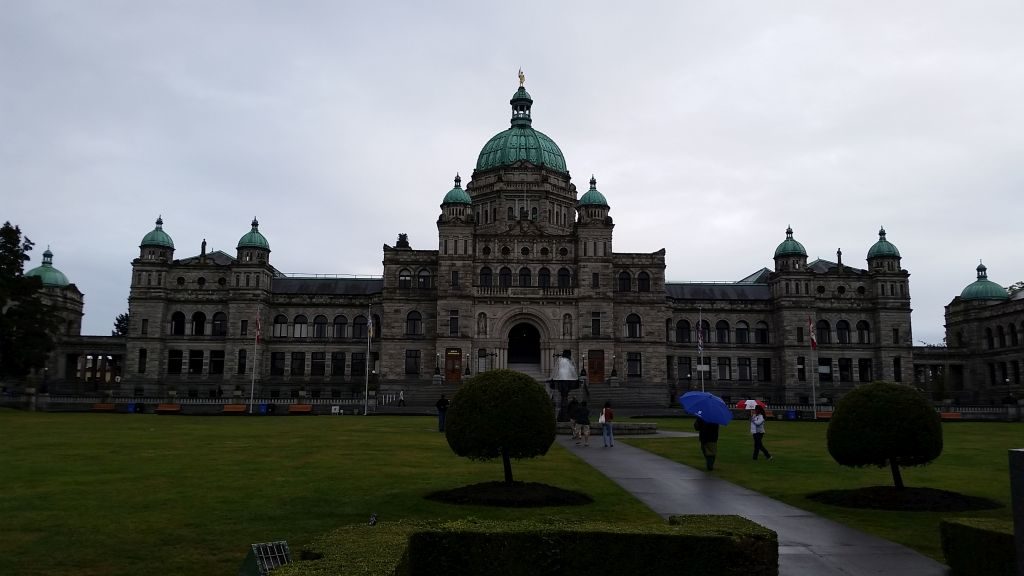 Day 8 (Seattle) – Back to Seattle, get off the boat, taxi to the airport (since the subway station was a hike from the Port). Got to the airport legitimately 4 1/2 hours early. One of the things we kept reading was if the ship gets in before noon then DO NOT book a ticket home earlier than noon… that’s a kind of stress no one wants or needs in their lives. Of course, being in the airport for that long was a bit longer than I might have wanted, but I’d rather that than end up running through the airport because the ship was delayed by storms or something. Plus, it kind of worked out as our flight ended up being 30 minutes shorter than the estimated arrival time (gotta love those tailwinds).

Day 9 (Georgia) – Veg all day. Laundry all day. One thing you realize about packing for this long of a trip, you start to run out of clothes, and then when you get home it takes all day to clean everything. And you’re a little jet lagged. And you realize your dad had it right all those years when he took 2 weeks off for vacation. The first for the actual vacation and the second week to recover from said vacation.

I don’t have that kind of time, so I took one extra day (Monday being Memorial Day and all), and did my best to get into work for a shortened Wednesday to Friday week.

Thus ends our trip. Most of the time on vacation I’m always amazed at how quick the time went, but this trip wasn’t like that. Maybe I managed to stay “in the moment” more than a normal vacation. I’m not sure that makes a lot of sense. Regardless, I felt like I experienced it, and it was the exact correct length.

Writer of comics and novels. In 2006 his first short story "The God That Failed" was published by Terminus Media in their debut comic Evolution Book 1. Since that time he has had stories published in Terminus Media's Evolution Book 2 and Evolution Special, Kenzer and Company's The Knights of the Dinner Table, and Four J Publishing's The Burner #3. Currently he is eagerly awaiting the digital publishing of his first creator-owned comic The Gilded Age #1 to be published online as well as his first novel The Dark That Follows later this year.
View all posts by John McGuire →
Tagged  Alaskan, Bald Eagle, Glacier Bay, Ketchikan, Skagway, vacation, Victoria.
Bookmark the permalink.