On one of my various adventures down the rabbit hole that is the internet I somehow found myself staring at this page for a collection of short stories from a couple of years ago. No biggie, I end up at various projects from time to time, but this one stuck in my head.

Since then I’ve been reading these shorts during lunch, trying to squeeze in one more where possible before my lunch break ends.

The Machine of Death (a collection of short stories edited by Ryan North, Matthew Bennardo, and David Malki) 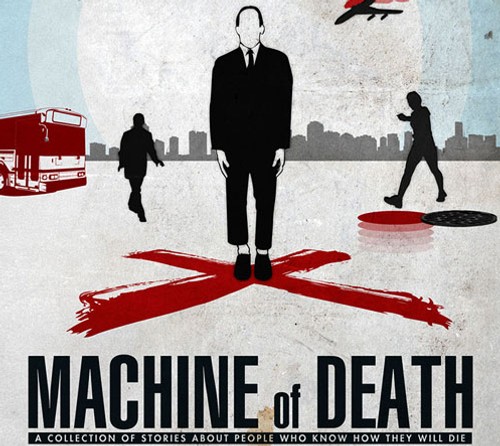 The premise is simple enough. At some point in the not so distant future some scientists managed to stumble upon a machine which will, through a sample of blood, tell a person how they are going to die.

That, in and of itself is interesting enough for me. But then they take it one more level. Let me give an example:

Guy comes in, gets his death slip given to him and it reads: Old Age.

Great, what an excellent thing. I know I’m going to live probably another 50-60 years. And then he steps outside and gets run over by a car driven by a senior citizen.

Yes, it is cutesy, but there is also a lot of room in there to play with. I believe the good ideas are ones that get you thinking regardless of whether they are your ideas or not. They are the ones that you slap your forehead (hopefully, not too hard) and say “Why didn’t I think of that?” or “That is so obvious, why hasn’t anyone ever thought of that before?”

More than all of that, I like the dilemma it provides. If you had knowledge of what caused your death (not the when or the where, just the How) would you want to know?

Think about it for a second… what if you get Car Crash? If you live in any city, anywhere, then you are completely hosed. So you stop driving, you move to the country where the only cars that might come anywhere near you are the mailman and the occasional delivery you have. You live your days like a hermit until, at some point, the prediction still comes true. Because that’s the kicker: you can’t change your fate. Maybe you can delay it, maybe not.

What about the idea that knowing your future will actually cause you to end up on that path? Maybe you get Car Crash, but because of that prediction you embrace your fate. You live as hard as you possibly can until finally you die in a street race (hey, Furious 7 just came out so it’s on my mind). Who’s to say that had you never gotten your reading, maybe it would have gone differently for you?

That’s the things I love though. These simple ideas which cause me to spend hours on the drive to work trying to figure out what I would do. How I might try and game the system. What type of story would I tell in this strange world.

I’m reminded of the old Twilight Zone episode “Nick of Time” where William Shatner and his wife end up with a broken down car in Small Town, USA. They go to the local diner which has this little fortune teller on the table. You feed it a penny, ask it a question, and it gives you a sorta Magic 8-Ball style answer. But the thing is that this couple gets to the point where they are asking it questions about their future at first, and then that becomes almost asking it permission (When can we leave?). They become paralyzed by this little machine. 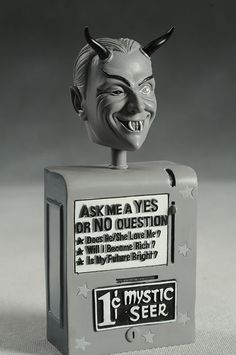 And maybe that’s because knowing what is to come removes much of the mystery from life. Even if it is a good future told to you, it may still be years away. You may just miss the journey if you’re not careful. You could not live your life because you are too busy waiting for something good to happen. We spend our times clocking into our jobs, waking up at the same time every morning, doing the same things day in and day out because of the idea of what the future might bring. Sometimes you just have to make the decision to embrace things as they are and make the change. Don’t wait for the fortune teller, whether it is a Machine of Death or a a strange woman behind a crystal ball.

Writer of comics and novels. In 2006 his first short story "The God That Failed" was published by Terminus Media in their debut comic Evolution Book 1. Since that time he has had stories published in Terminus Media's Evolution Book 2 and Evolution Special, Kenzer and Company's The Knights of the Dinner Table, and Four J Publishing's The Burner #3. Currently he is eagerly awaiting the digital publishing of his first creator-owned comic The Gilded Age #1 to be published online as well as his first novel The Dark That Follows later this year.
View all posts by John McGuire →
Tagged  books, John McGuire, machine of death, twilight zone.
Bookmark the permalink.