This past weekend, among the myriad of stores at the North DeKalb Mall in Decatur, Georgia, I got to hang out, meet people, sell books and comics, hold down the table, carry in pieces of the Tardis, listen to a Radio Drama based on my own comic, and feel really tired when Sunday night finally came. 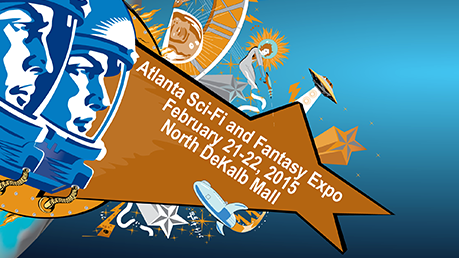 This was the first (hopefully of many) year for this particular con, so I was unsure what exactly to expect. I’m sure that’s the feeling of everyone who journeys to a new convention/expo. How many people are actually going to show up? What types of things are they going to be into? Does any of that align with what I have to sell at the table?

And I have to admit that I’m a pessimist when it comes to such things. I may not share these thoughts with everyone else, but I’m always wondering if something should just be done a different way. That old, what if no one cares we’re there? Should this Expo really be two days? Wouldn’t one be enough? Isn’t there a comic convention in Macon the same weekend? And isn’t that going to impact things?

But I have to admit… I was wrong. 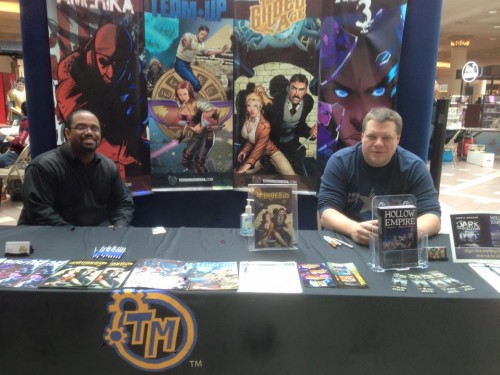 Well, maybe not about every little thing, but the big stuff. Turns out that FREE to get in means that the $5 or $10 or $20 the con-goers have to spend to enter a con means they suddenly have less money for my books or Terminus’s comics. But with FREE… well, you just can’t beat that. And because we were in a mall there was a steady stream of people coming by the booth. Some because they knew about the Expo, some who encountered the Expo as a happy surprise, and then the other people… the “Normals” who gave us that look that said – “What the Hell is going on here?”

I think we managed to get our comics into the hands of a bunch of people who had never experienced Terminus Media before. And I know that with the quality of the work they will be hungry for more.

And I even sold a few copies of The Dark That Follows and Hollow Empire.

However, the biggest bit of excitement, at least for me, was seeing the Atlanta Radio Theatre Company (ARTC) do a radio presentation of the first issue of my comic The Gilded Age! 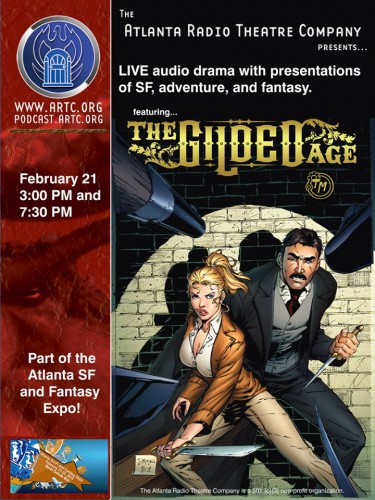 They did two showings, and each probably was between 10-15 minutes, but it was definitely a different (very cool) experience. Stranger still that my inner critic began rewriting bits of dialogue I’d written in the first place… suddenly hearing something spoken out loud gives you a whole new appreciation for turns of phrase, clunkiness of comic dialogue writing, etc. It is something I started doing with some of my prose work as a final check. If you are stumbling over the words while reading it aloud, maybe there is a fundamental flaw in the text somewhere.

When I’m at the tables talking to people about the comic, one of the things I always come back to is that my job as a comic writer is to not screw up the art with my WORDS.  And in a way, that’s the thing I was hoping the whole time I listened. Luckily for me, the ARTC did an amazing job on it! Bringing the characters to life in a way I would have never thought possible. When Elias Gladstone first started speaking, I just started nodding to myself – yep, that’s his voice.

And as a first for them, they had images from the comic projected alongside them as they read through it, so not only could you close your eyes and imagine what was going on, you could sneak a peak at the art from the issue to see how close you were.

In theory (fingers crossed), we have a video of it, so once it is online I will be directing traffic in its direction… if only because it is a fairly unique thing (at least for me).

And again, to those who were able to come out and share in the experience with me, I appreciate it. Thanks again!

Writer of comics and novels. In 2006 his first short story "The God That Failed" was published by Terminus Media in their debut comic Evolution Book 1. Since that time he has had stories published in Terminus Media's Evolution Book 2 and Evolution Special, Kenzer and Company's The Knights of the Dinner Table, and Four J Publishing's The Burner #3. Currently he is eagerly awaiting the digital publishing of his first creator-owned comic The Gilded Age #1 to be published online as well as his first novel The Dark That Follows later this year.
View all posts by John McGuire →
Tagged  Comics, convention, John McGuire, The Gilded Age.
Bookmark the permalink.